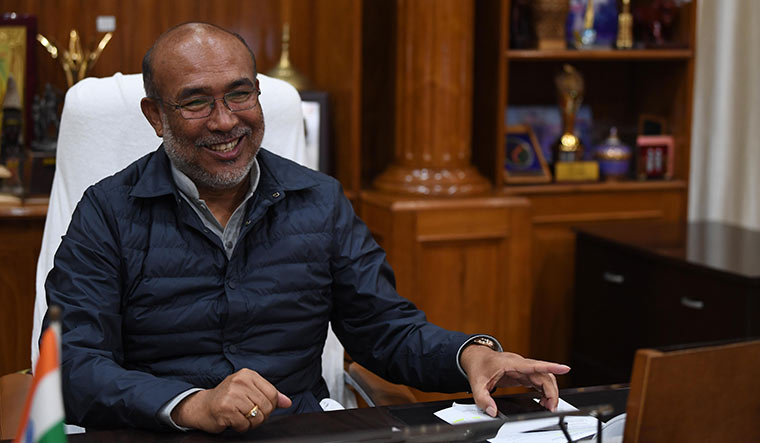 Q/ Many were surprised when you were chosen as chief minister five years ago. You had just joined the BJP after a long stint with the Congress.

A/ That is true. I did not expect that. In the late evening of March 8, 2017, I got a call from Amit Shah. He told me that the parliamentary board had chosen me as chief minister. I almost jumped in joy. That day I took an oath that I will not let them down. I worked 24x7 the past five years and you now are seeing the change. What the Congress could not do in 15 years, I have done in five.

Q/ But you were also a senior Congress minister for close to 15 years.

Q/ Development has not reached every part of Manipur, especially the hills.

A/ Once I receive official reports about this—that there is a gap—I will try my best in the remaining three months [before the elections].

Q/ You have said that the Modi government has helped you in every way. Could you elaborate?

A/ First, take the case of the highways. The Centre gave me Rs4,000 crore to build highways (Imphal to Moreh and Imphal to Dimapur). For water, I received Rs3,400 crore. So, I was able to get potable water for the poor. Before I assumed power, Manipur had only 5 per cent tap water supply. Today, it is more than 60 per cent.

Q/ You seem to have handled the pandemic well. But, like in Bengal, cases could go up around election time.

A/ You are right. I am worried about it. But what can we do, elections have to be conducted. But I have told my officers that we should not let our guard down. We were successful because we drew up a plan when Covid-19 broke out in Wuhan. We started restrictions then. We had no oxygen plant in our state, but now we have one in every district. We were the first state to start door-to-door vaccination. Our double dose (vaccine) number is higher than the national average, almost touching 50 per cent. We will hopefully manage the third wave, too.

Q/ Insurgency has come back to Manipur. The ambush by People’s Liberation Army rebels on the Assam Rifles convoy is being highlighted.

A/ This is not a sign of revival [of insurgency]. I think this is the work of a group with a vested interest, to damage the democracy of Manipur. So, they carried out an attack just before the elections. They might take another chance in the next few months. But I have called meetings with senior officials and armed officers. I will never let insurgents be successful. They targeted Army officers and the Army has every right to retaliate. But if they target common people, I will finish them off on my own without any help from the Centre.

Q/ But why did it happen at all?

A/ It is inhuman that a child and a woman (Col. Viplav Tripathi’s family), who are not at all linked to the military crackdown, were killed in the ambush. I hung my head in shame. They probably wanted to target me.

A/ He did not surrender. The police arrested him from the Myanmar border.

Q/ But why was he released? Was he given amnesty?

A/ No amnesty. That is what you need to ask the judiciary. This is a precarious situation. We cannot do anything here.

Q/ Home Minister Amit Shah has allowed Assam Chief Minister Himanta Biswa Sarma to start a dialogue with United Liberation Front of Assam-Independent commander-in-chief Paresh Baruah. Should you not get the same power?

A/ I have not told anyone this, but I have also obtained the same power from Amit Shah. In fact, I have already made many insurgents surrender.

Q/ Many people in Manipur see you as a dictator who puts people behind bars and slaps sedition charges on journalists.

Why, of 300 journalists, are only two or three are repeatedly arrested? This is because they are habitual offenders. Journalism is a proud and noble profession. I am also a former journalist. If you read Article 19 of the Constitution (freedom of speech), you should also read the reasonable restrictions in it. Manipur is a sensitive state where peace has not come easily. They use social media to mock a dead person? (While condoling the death of a BJP leader, a journalist and an activist had said that cow dung and cow urine do not cure Covid-19). How can I accept that? They write articles while drunk. I have every right to take action as per the Constitution, and that is my duty.

Q/ Some people accuse you of bringing radical hindutva to Manipur.

A/ This is rubbish. Why do Christians come to me then? Our Manipuri Hindus are different. They do not believe in radicalism. And our party does not play that card anywhere.

Q/ Are you sure you will get majority on your own this time?

A/ I am 100 per cent sure. Look at the opposition. Everyone is coming to us. I have worked for people and they will bring me back to power.

Q/ Do you have any interest in national politics?

A/ As of now, no. I have a lot of work pending in Manipur. I need to rebuild the state. For 30 years, people here were deprived of entertainment. The culture of Manipuris has come back with development and peace. I also have to work hard to bring pro-India nationalism to the minds of all Manipuris who feel alien even today. That is a big task for me.

Q/ The political drama unfolding in Manipur is no less entertaining. MLAs are going to Delhi to complain against you.

A/ See, people work hard to get a ticket. Then they work hard to become MLAs, then ministers, then the chief minister. Ambition is natural. But one has to see how feasible that ambition is.

Q/ You were a national-level footballer. So, you must be good at dodging.

A/ Yes, not only dodging and tackling, I can defend as well. Only thing I could not do is save goals as I never played as a goalkeeper. Despite this, I will save the goal post of my party this time.