How a tribal village in Telangana turned to Sikhism 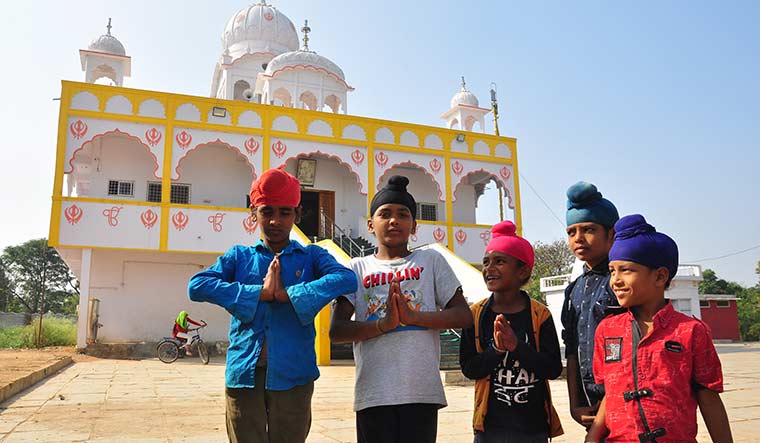 Guiding light: Children in front of the gurdwara in Gachubhai Thanda | P. Prasad

TO REACH GACHUBHAI Thanda, one has to follow the line of sight of a renowned Hindu saint’s statue. The 216ft-tall statue of saint Ramanujacharya, also called the Statue of Equality, will be unveiled by Prime Minister Narendra Modi in February 2022.

The tribal hamlet and its neighbour, a spiritual mascot, lie in Shamshabad, a short drive from Hyderabad. A narrow, dusty lane off the Hyderabad-Bengaluru highway leads to the entrance of the settlement. But for the villagers, Gachubhai Thanda now exists only on paper, as they insist that they live in Guru Gobind Singh Nagar.

It is Sunday morning, and a middle-aged man donning a Patiala shahi pagg—a traditional way for tying the Sikh turban—with a kirpan slung across his chest, guides a heavy vehicle. A little farther away, a youngster in a gol parna (another Sikh turban style) stands outside a small concrete house. And, on reaching the open field, one can see six boys in patka—a smaller under-turban worn by children—playing cricket. One does not need to refer to official records to know that 90 per cent of residents here are Sikhs.

The village has around 500 residents, almost all of whom are Lambadas, listed under the Scheduled Tribes. The conversion to Sikhism happened in the last 20 years or so. The villagers mostly speak Lambadi and a bit of Hindi and Telugu, but no Punjabi. The village has its own gurdwara—Gurdwara Saheb Dashmesh Darbar. The two-storied structure lies on one end of the village, surrounded by farmland.

In its vicinity lives Lakhvinder Singh, who was born Khetawat Deepla. All Sikhs in the village took new names when they embraced the new religion. Lakhvinder, 73, is president of the gurdwara committee. The gurdwara stands on land he donated five years ago. “Life became more meaningful after I converted,”says Lakhvinder, who was among the first converts. He points to a room in the gurdwara premises, and says, “That is where it all started for us.”

Inside the unused room is a two-feet-high tomb. “Our ancestors used to occasionally visit the Nanded Sahib in Maharashtra,”recalls Lakhvinder. “Around 50 years ago, they set a bull free, chanting the name of Guru Gobind Singh. When it died, they buried the animal and constructed a tomb. The elders then placed a picture of Guru Nanak above the tomb and conducted pujas for a long time. In 1996, we raised a roof and turned it into a small temple.”

It was another village elder—Bhagat Singh—who initiated the process of building a gurdwara in the village. Bhagat claims to have visited the Sikh holy sites in Pakistan and also stayed at a gurdwara in Hyderabad for nearly five years to get a deeper understanding of the faith and its tenets.

“In 2001, I consulted Sikh religious leaders on converting our small temple into a gurdwara,”recalls Bhagat, an auto driver. “We were told that it was better to embrace Sikhism if we wished to perform rituals at the gurudwara. Around 70 of us then got initiated into the faith, and we started carrying the five articles mandated by the religion.” 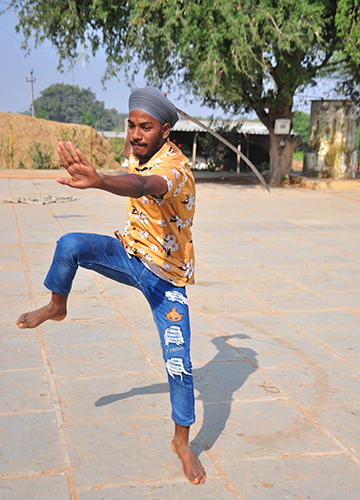 According to Bhagat, their strength has grown from 70 to more than 400 now. “Inspired by us, a few from nearby hamlets have also converted,”he says.

A usual day at Guru Gobind Singh Nagar begins at 4am, with hymns and verses blaring from the gurdwara’s speakers. The gurdwara is open for all devotees till 7:30pm. On full moon days and special occasions, a langar is served. Guru Gobind Singh’s birthday is celebrated with aplomb every January 26, so as to not clash with the December birthday celebrations at other gurdwaras. Committee members say at least 5,000 people attend the day-long festivities, with kirtan specialists and religious leaders arriving from Punjab.

A few donors help run the gurdwara, say villagers. “There was good support while constructing the gurdwara,”says Lakhvinder. “The planning and architecture was done by the team from Patna Sahib. A part of the construction material was donated by Nanded Sahib members. A person from Hyderabad, too, helped a lot while building the gurudwara.”

Mohan Singh, 30, is the granthi (priest)—the first from the village. He stayed and trained at a gurdwara in Hyderabad for 13 years before returning to his village. He is also one of the few who can read Gurmukhi.

“We want the younger generation to follow our path,”says Mohan. “When I find time, I teach children about the principles of our religion and its importance. Sometimes, people from other gurdwaras come to teach kirtan or gatka (sword-fighting) to the youngsters.”

The lifestyle and outlook of the villagers has also changed over the years. Tobacco is banned in the hamlet. “Whenever we see someone smoking, we immediately counsel them,”says Dharam Singh, who is in his 20s. “No shops here sell tobacco products. The same goes for alcohol and toddy.”

Also, meat is consumed only if the animal has been killed by jhatka or single strike. That is why some villagers volunteer as butchers from time to time.

Considering the community is small, is it not difficult to find a bride or groom? Dharam says that they have help here, too. “Recently, an elderly Sikh woman from Hyderabad, who has supported us from the beginning, proposed that she could help us find the right match from other parts of the country, including Punjab. If you ask me, I am open to it,”he says.

But village elders say that it is better to marry someone from their own tribe. While many from nearby hamlets may not have converted to Sikhism, says an elder, they have no problem marrying the youth of Guru Gobind Singh Nagar.

The villagers live in harmony with each other, irrespective of their faith. Kethavath Rahul’s family is among the few who have not converted to Sikhism. “My family had migrated to Pune and lived there for many years,”he says. “When we returned, it was a little difficult for me to adjust as everyone here was different. Now I am comfortable with them and I also visit the gurdwara.”

Even within a family, there are people of different faiths, as some members have chosen to convert and some have not. And, that is perhaps why one’s faith has never harboured hate for another here. The villagers proudly say that they have never experienced communal tensions or discrimination. For now, they are all upbeat about the new landmark that is visible from every house in the village—the Statue of Equality.