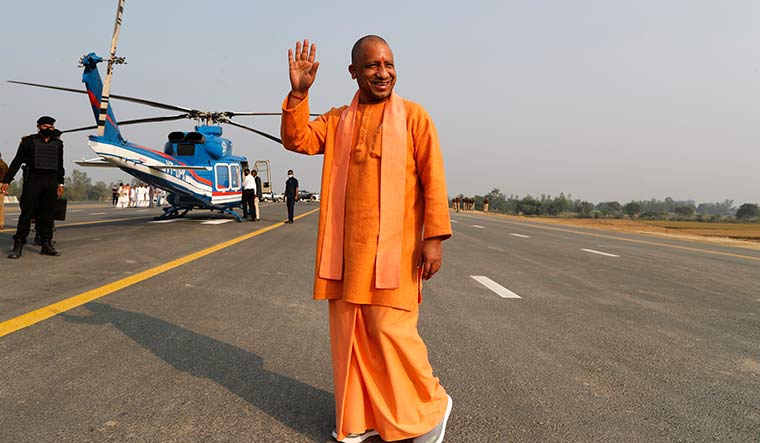 Smooth ride: UP Chief Minister Yogi Adityanath arrives for an inspection of the Purvanchal expressway in Sultanpur district | AP

YOGI ADITYANATH GREW in strength and stature by opposing what he perceived was the BJP’s dilution of the hindutva ideology. The Hindu Yuva Vahini, a far-right outfit, was his answer to this dilution. He was open in his defiance of the BJP in his first decade in politics, going as far as opposing the party’s official candidates. He has not changed much even after the BJP made him the chief minister of Uttar Pradesh in 2017.

The BJP has 304 members in the 403-member UP assembly. Its closest rival, the Samajwadi Party, has only 49. While political wisdom says disadvantages of anti-incumbency will reduce the BJP’s numbers, it looks thus far that the party will retain power in the elections expected in February.

Adityanath has weathered many a storm as chief minister. The strongest of them was in January when Arvind Kumar Sharma, a bureaucrat from the Gujarat cadre, took voluntary retirement to join the party and moved to UP. Sharma was said to be the eyes and ears of Prime Minister Narendra Modi and sent to keep a watch on Adityanath. The position of a deputy chief minister was also touted as a distinct possibility.

Adityanath was unperturbed. And Sharma had to be content with being the vice president of the party’s state unit, an ornamental post at best. It subtly showed the central leadership how difficult it was to override Adityanath’s wishes in UP.

There have been other blips, notably the stringent criticism by Keshav Prasad Maurya, one of two deputy chief ministers. Maurya is the party’s main leader from the Other Backward Classes and has maintained that the party has not taken a decision on the CM face for the assembly elections. He has ambitions for chief ministership and cannot be publicly ruffled because he is the best bet to get the keenly contested non-Yadav OBC votes. Adityanath, however, has made no overt measures to placate him, barring a visit to his home to bless his newlywed son and daughter-in-law in June.

Adityanath’s continuation as chief minister after the elections is an almost settled matter in the party. Union Home Minister Amit Shah declared it publicly during his visit to Lucknow on October 29. Before that Modi had heaped praise on the development work carried out in the state. It is unlikely that they will risk muddying the scene by disturbing the broad contours of the state’s politics. Sitting MLAs will be dropped, though; some political observers put the figure at a third.

However, if the party’s calculations in the state are upset, the blame will lie solely with Adityanath. The UP elections are touted as the vital semifinal before the Lok Sabha polls in 2024, and a substantial erosion in seats will be a potent weapon to bring down a notch his rising influence.

SP chief Akhilesh Yadav is on a Vijay Rath Yatra and people are turning up in big numbers to see him, bringing back memories of the cycle yatra which had catapulted him to power in 2012. Seniors in the party, however, rue that he is inaccessible and spends just four hours at the party office. If he does not make it up to the seniors, they point out, there will be barely anyone with a statewide appeal to hit the election trail and counter the BJP. Modi himself is planning to attend 50 rallies.

Juhie Singh, the spokesperson for the SP, said the party had spread out throughout the state and was not depending only on the party chief to do the heavy lifting. “Locally recognised leaders are meeting people in smaller groups. This will help integrate our supporters,” said Singh, who, as the national president of the party’s women’s wing, has kept up a hectic schedule of reaching out to women.

Women have been at the centre of the Congress’s plans as well, with general secretary Priyanka Gandhi Vadra announcing that 40 per cent of the party’s candidates will be women. Congress state president Ajay Kumar Lallu said it was a “progressive” step that had women excited for the elections.

Party members, however, wonder from where the party is going to find as many women candidates. Those without a chance at winning are unlikely to earn the party the anti-BJP votes. While the mood in the party had been upbeat because of Vadra’s longer stays in the state, there was no organisation on the ground to sustain that enthusiasm, said a partyman. “We do not even have the strength to ensure proper verification of the voters’ list,” he said.

Vadra draws attention because the BJP usually responds to her when she is around. That seems to be a ploy to shift focus away from the stronger opponents, the SP and the BSP.

BSP chief Mayawati has been more critical of the SP than the BJP on social media, lashing out at the party for admitting deserters from her party. “The party should know that taking on selfish people and turncoats angers its long-time members, many of whom are in contact with BSP,” she tweeted.

Dharamveer Chaudhary, the spokesperson for the BSP, said that the party had been active at the booth, block and district levels. “We adhere to [party founder] Kanshiramji’s principle of eschewing the disruptive politics of agitation. Last time, we lost 88 seats within a 2,000-vote margin. This time we will gain those and more,” he said.

As the elections come closer, familiar notes that have little to do with governance and development have begun to emerge. Every party proclaims its commitment to building the Ram Mandir in Ayodhya to honour the Supreme Court verdict. The communal violence in Kairana has been dug up to churn emotions. There is little to suggest that there is a major change in the manner in which electoral politics in the state will go. It is more of the same.