IT WAS WORK as usual on October 7 for the staff of Boys Higher Secondary School in Sangam, Srinagar. But at 11:15am, militants from The Resistance Front (TRF)—which, say the police, is the Lashkar-e-Taiba (LeT) in disguise—walked in. They first snatched phones of the teachers on the lawn. They then went inside, and asked principal Supinder Kour, a Sikh, and teacher Deepak Chand, a Hindu from Jammu, to step out. The militants took their phones, and shot them dead.

The killings happened 48 hours after three civilians were shot dead by TRF militants. Among the victims was Makhan Lal Bindroo, a Kashmiri Pandit and owner of Srinagar’s famous pharmacy. He was killed at Haft Chinar near Iqbal Park, an area dotted with police and paramilitary camps. An hour after Bindroo’s killing and 8km from Haft Chinar, Virender Paswan, a hawker from Bihar, was shot dead by militants of the Islamic State Wilayah Hind at Lal Bazar. Soon, news of another killing came in—that of Muhammad Shafi Lone, head of a taxi drivers’ union at Shahgund in Bandipore. On October 11, five Army personnel, including a Junior Commissioned Officer (JCO), and two militants were killed in four encounters in different parts of the union territory.

Since this January, 28 civilians have been killed by militants in Kashmir. Five belonged to the local Hindu and Sikh communities, two were Hindu labourers from other states; the remaining 21 were Kashmiri Muslims active in political parties, mostly the BJP.

The recent target killings have triggered panic among the minorities and non-Kashmiris. It also punctured the BJP’s claim of having restored peace in Jammu and Kashmir after the revocation of Article 370 in August 2019. Many compare the current situation with that of the 1990s, when Pandits fled Kashmir following attacks on the community and the dread of militancy.

Unlike other militant groups, the TRF claimed responsibility for the recent attacks. In its statement, it accused Bindroo of being an “RSS ideologue who was involved in immoral trafficking and drug supply”. It said Kour and Chand had “warned parents with dire consequences”if students did not attend the Independence Day function in school. It also claimed responsibility for Lone’s killing, accusing him of being an informer. His family denied the allegation.

Sidharth, Bindroo’s son, too, rubbished the TRF allegation against his father. “If you kill someone with a reputation, you create ripples,” he said. Bindroo’s home in Indira Nagar was brimming with people, including Muslims, who had come to offer condolences. Sidharth said his father loved Kashmir and never wanted to leave even when they urged him to. 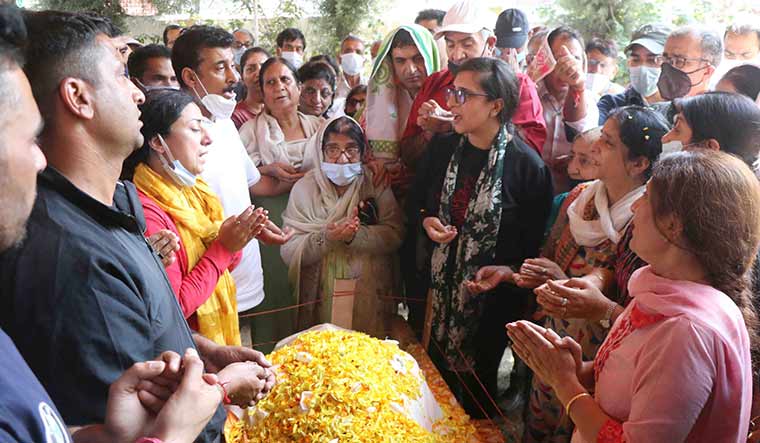 Shraddha, Bindroo’s daughter, has not shed a tear. “He died like a fighter. He always said I will die with my shoes on,” she said. The militants only killed his body, she added, not his spirit. “See what he has made of his children,” she said. “I am an associate professor, and my brother is a diabetologist. My mother is running a shop.”

A day after Bindroo’s killing, Srinagar Mayor Junaid Mattu announced that the road from Haft Chinar to Jehangir Chowk would be named after him. Bindroo was the second Kashmiri Pandit to be targeted this year. On June 2, militants shot dead Rakesh Pandita, a BJP municipal councillor, in Pulwama district.

Like the Bindroo home, Kour’s residence in Srinagar’s Aloochi Bagh, too, was swarming with mourners. She leaves behind her husband Ramesh Singh and a son and a daughter. Her Muslim neighbours remember her as being humble and respectful towards all. A neighbour said Kour was taking care of all the expenses of a poor Muslim girl. Kour’s mother-in-law, Nisser, repeatedly asked, “Why was she killed when she did no wrong?”

A relative said that Kour had taken her new car to the school for the first time on the day she was killed. Kour’s daughter Jasleen, a seventh-grader at Delhi Public School, Srinagar, said she had spoken to her mother on the phone after she had left for school. “I was attending my online classes when I called her again. No one answered the call,” she said. Kour was cremated after Sikhs marched with her bier from Aloochi Bagh to the civil secretariat to stage a sit-in. 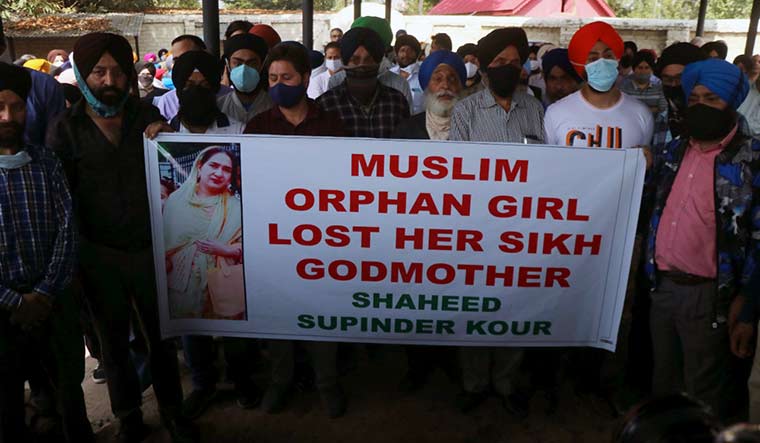 Paswan was also cremated in Srinagar. The Srinagar district administration paid his family 01.25 lakh as compensation and offered to take his body to Bihar, but they refused. His killing has caused a stir among migrant labourers who work from spring to autumn in Kashmir and return home in winter. They fear being the militants’ next target.

In Jammu, Chand’s family is struggling to come to terms with the tragedy. They had migrated from Srinagar’s Batamaloo in 1989 after the eruption of militancy. He was appointed as a teacher under the prime minister’s employment package for migrants four years ago.

“He had made a video call to his family at 11am on the day he was targeted,” said Chand’s cousin Vicky Mehra. “He was passionate about teaching and would always say there was no problem in Kashmir.” Mehra wants a government job for his sister-in-law in Jammu. He also stressed that politicians must avoid making statements as they “cause more trouble for the people”.

Politicians, separatists and Islamic scholars like Mufti Nasir, Kashmir’s grand mufti, condemned the killings. While Farooq and Omar Abdullah of the National Conference pleaded with the minority communities to not leave the valley, Mehbooba Mufti of the Peoples Democratic Party said that the killings were a glaring failure of the “double engine”government’s repressive policies.

The visits by politicians and members of civil society to the victims’ families did little to instil confidence among the Kashmiri Pandits and Sikhs in Kashmir. A Sikh leader said the biggest security for the minorities is the majority community. “The time has come to condemn all killings, irrespective whether the person is a Kashmiri Pandit, Sikh or a Muslim,” he said. “I wish the majority community had joined our protest against the killings.”

Despite the reinforcement of security in minority localities, several Pandits who were working in different departments in Kashmir fled to Jammu. The Centre has reacted to the killings by sending top counterinsurgency experts and officers from the Research & Analysis Wing and the Intelligence Bureau to Kashmir. The National Investigation Agency is now probing the cases. In one of the biggest crackdowns, 400 plus people with separatist links were detained, while 40 teachers were summoned by the NIA for questioning.

On October 11, the police said it had shot TRF’s Imtiyaz Ahmed Dar, who was involved in Lone’s killing, in an encounter. A day before, Inspector General of Police Vijay Kumar had said that the conspiracy of Lone’s killing was solved by arresting four overground workers of the TRF. On October 12, the police said three TRF militants, including Mukhtar Shah, were killed in an encounter in Shopian. Shah was allegedly involved in Paswan’s killing.

Security officials say that the TRF has emerged as the biggest threat after the revocation of Article 370. It is the only other group after the Jammu and Kashmir Liberation Front to have chosen a non-Islamic name. The TRF hit national headlines last April after five Special Forces soldiers were killed in an encounter with a group of militants at Dongri Behak in Kupwara, near the LoC. Five militants were also killed; one, however, was identified as an LeT militant. On December 31, 2020, militants shot dead jeweller Satpal Nischal at his shop in Srinagar, just weeks after he was certified as a domicile of Jammu and Kashmir. The Nischals had migrated from Pakistan to Punjab during partition and had moved to Kashmir in the 1960s. This February, Aakash Mehra, whose father owns a popular eatery in Srinagar, was shot dead. The Mehras hail from Jammu and have been running the eatery for decades.

According to police sources, the TRF has been effective because of ‘hybrid’ militants. These boys have no police records nor a social media presence. They carry out an attack, mostly using pistols, and melt away into the crowd. A former BJP sarpanch, Aqib Shafi Baddar of Qaimoh in Kulgam, was arrested for brandishing a pistol at a joint patrolling team of Army and police personnel. He was identified as an overground worker of the LeT; he had carried out the recce of two places where BJP members were later killed by TRF militants.

There is consensus in the political circles that the targeted killings are a result of a growing sense of fear about planned demographic change by the BJP. Other reasons that have exacerbated the crisis are the sacking of government employees without the right to appeal against the decision, and proposed transfer of land to outsiders for setting up businesses.

A political leader said that after the abrogation of Article 370, a sense of disempowerment had gripped Kashmir. “People feel disempowered politically and economically in Kashmir,” he said. “A similar feeling has gripped Jammu, but they are less vocal about it.”