Goa assembly polls: Will the anti-BJP parties be able to form a grand alliance? 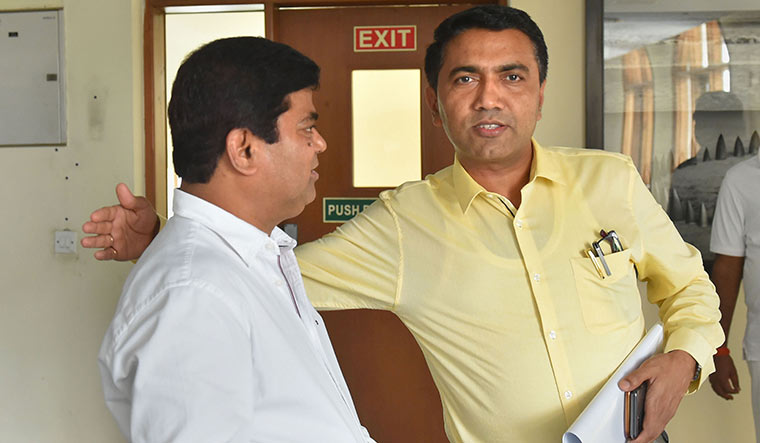 The battle lines for the assembly elections are being drawn in Goa. In the fray are the old rivals—like the ruling BJP and the opposition Congress—and some new contenders. National Highway 66, which passes through the state, is flanked with hoardings featuring West Bengal Chief Minister and Trinamool Congress chief Mamata Banerjee. The Aam Aadmi Party, too, has put up posters promising up to 300 units of free electricity and an unemployment allowance of up to 05,000 per month.

The BJP has been in power for 10 years here. In 2012, the party won a majority on its own. But in 2017, the Congress was the single largest party with 17 seats. The BJP, which finished second with 13 seats, engineered defections in the Congress and captured power. The party also sent Manohar Parrikar, then the Union defence minister, to take over as chief minister. After Parrikar’s death in 2019, there were fears that the government would collapse. But Chief Minister Pramod Sawant proved to be a smart operator.

One of the first things he did was to drop the Goa Forward Party (GFP) MLAs from his cabinet. With 10 Congress defectors in its kitty, the GFP’s support was no longer needed. Since then, GFP supremo Vijai Sardesai—who was deputy chief minister in the Parrikar government—has been keen to get back at Sawant, whom he calls an “accidental chief minister”.

The assembly polls in February will not be easy for the BJP, especially in the absence of a tall leader like Parrikar. To counter the AAP’s promise of free electricity, the BJP has promised free water to every home and is working hard to deliver it. Sawant has promised 10,000 new government jobs by November, and has also launched the outreach programme, Sarkar Tumchya Dari (government at your doorsteps).

The soft-spoken Sawant enjoys the support of the RSS and the BJP’s central leadership. He belongs to the Goan Maratha community, considered to be part of Goa’s Bahujan Samaj. BJP national president J.P. Nadda naming Sawant as chief ministerial candidate has quashed any possible challenge from within the party.

But, considering his young age and relative lack of experience, Sawant is likely to toe the Delhi line. Things were different with Parrikar, who could convince the central leadership to agree to his plans. He broadened the BJP’s base in Goa by reaching out to the Christians who comprise 30 to 35 per cent of the state and are part of the Goan elite. Former Mapusa MLA Francis D’Souza, a key Parrikar ally, was the first Christian legislator to win on a BJP ticket. After he died in February 2019—a month before Parrikar’s death—his son, Joshua D’Souza, won Mapusa for the BJP. Almost half of the BJP’s incumbent MLAs are Christians; some of them, like Science and Technology Minister Michael Lobo, are well into their third terms. Notwithstanding its limited success in winning over the Christian minority, the BJP has always found it difficult to take Salcete, the Christian stronghold in south Goa, which has eight assembly seats. Yet, the BJP is keen to continue its Goa experiment to affirm that it is not an anti-minority party.

Another reason why the BJP is fighting hard for Goa is that the party does not want to lose control over another west coast state after Maharashtra. Till 2019, all west coast states, barring Kerala, were with the BJP. Losing Goa would be seen as a sign of the BJP’s loosening grip in the western belt.

While the central leadership has already named Sawant the chief ministerial candidate, old warhorses in the BJP have still not lost hope. Some of them are even pushing for tickets for their family members.

Health Minister Vishwajit P. Rane, who nurses chief ministerial ambitions, is keen that his wife, Divya, also be given a ticket. While he will contest from Valpoi, he wants her to run from the family seat of Poriem—currently represented by Rane’s father, former chief minister Pratapsingh Rane.

Like Rane, Lobo, too, wants a ticket for his wife, Delilah. If the BJP denies Delilah a ticket, then Lobo, who is another chief ministerial aspirant, will most likely quit the party. It could hurt the BJP in all seven seats in the Bardez region where Lobo is quite influential.

Another problem for the BJP is that Parrikar’s son, Utpal, has staked claim to Panaji, which his father held for 25 years.

The BJP also seems confused about handling the 10 defectors from the Congress. The BJP has received feedback from the field indicating that most voters are upset with their defection.

Sardesai, meanwhile, has been trying to build a grand alliance against the BJP. The GFP plans to contest 10 to 12 seats, and has reached out for an alliance with the Congress. “The accidental chief minister has put Goa on a fast-track sale,” said Sardesai. “He never had the mandate to rule, he became a chief minister because Parrikar passed away. He has made a mess of Goa.”

He hopes that the Congress and the Trinamool will ally to take on the BJP. That is, however, easier said than done. The AAP, for instance, is planning to contest in all 40 seats. But Kejriwal has also had a couple of meetings with Maharashtrawadi Gomantak Party chief Ramkrishna aka Sudin Dhavalikar. The MGP was once Goa’s ruling party, and the BJP entered Goan politics with its support. But after Parrikar’s death, the BJP burnt its bridges with the MGP by engineering the defection of two of four MGP legislators.

“When Kejriwal came to Goa, Dhavalikar paid a courtesy visit,” said AAP’s Goa state convener Rahul Mhambre. “He also expressed the desire to form an alliance, but nothing is finalised.” The AAP has already conducted over 300 meetings across all constituencies. It is also starting a yatra against the rising unemployment in the state.

While the Congress is understandably wary about the Trinamool and the AAP, the BJP is worried about the Shiv Sena and the Revolutionary Goans, a new party that has been attracting the youth. The Shiv Sena plans to contest 22 Hindu-majority seats in an attempt to hurt the BJP. The party is also keen to follow the Maharashtra model if the post-poll situation is favourable. The Revolutionary Goans, launched by Manoj Parab, has been making its presence felt in north Goa where the BJP has a committed Bahujan Hindu vote bank. If it contests, Revolutionary Goans may upset the BJP’s chances in at least four to five seats.

The BJP has appointed former Maharashtra chief minister Devendra Fadnavis as its election in-charge in Goa. He has completed two tours of the state. Fadnavis and Sawant are busy making the party battle-ready. They want the BJP to win a majority on its own, which may not be an easy task.