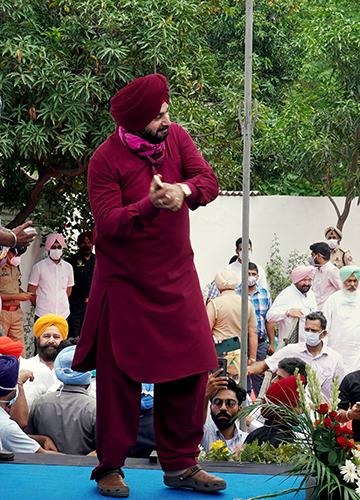 OVER TWO MONTHS AGO, when Navjot Singh Sidhu took charge as Punjab Congress president in Chandigarh, he made a ‘big hit’ gesture. It was seen as a dare to chief minister Captain Amarinder Singh. The cricketer-turned-politician was made Punjab Congress Committee chief despite stiff resistance from Amarinder, and he was seen as enjoying the backing of the party high command, especially the Gandhi siblings.

The 57-year-old leader has, however, left his party stumped and the Gandhis red-faced by stepping down as PCC chief. The move unravelled the resolution of the infighting that the party high command thought it had achieved by replacing Amarinder with Charanjit Singh Channi, a dalit Sikh, as chief minister. Sidhu, who was projected as a panacea to the party’s problems, was all of a sudden the source of deep distress. The Akali Dal and Amarinder wasted no time to remind the Congress leadership that they had warned it about Sidhu’s ‘instability’ and ‘unpredictability’.

A lot had changed for Sidhu in the last two months, which could explain his decision to quit. Amarinder’s removal had been in sync with Sidhu’s plan of action for the party ahead of assembly polls. Since April, he had been commenting on the people’s anger with the Amarinder regime over the sacrilege issue, the drugs menace and the faulty power purchase agreements.

However, things did not go as per script for Sidhu, starting with the controversy over his choice of advisers. The Gandhis were upset with the statements of the advisers, two of whom eventually stepped down. One of them, said to be sympathetic to Sikh militancy, had tweeted a cartoon that showed former prime minister Indira Gandhi in poor light. Chastised, Sidhu had declared—“Int se int baja doonga”—meaning he would take his fight to those in authority if he was not allowed to take decisions. It was seen as a message to the Gandhis.

The next blow came when Sidhu was overlooked for chief ministership. He had opposed the names of both Sunil Jakhar and Sukhjinder Singh Randhawa for the post. Channi was seen as a consensus candidate. But Sidhu was side-lined in the discussions to choose Channi’s cabinet. The cabinet expansion had Rahul’s imprint and he dealt directly with Channi. Even in the choice of top officials, Sidhu felt he was non-influential.

Sidhu, in a video message, said he could not tolerate any wrongdoings. He has projected his revolt as opposition to the inclusion of Rana Gurjit Singh in the cabinet, who had earlier been removed as minister over allegations of corruption in allocation of sand mining contracts, and to the appointment of A.P.S. Deol as advocate general. Deol had been the counsel for former state director general of police Sumedh Singh Saini in the sacrilege case.

“One of the ways the present crisis can be resolved is that the people at the centre of the controversy, the leaders and officers, voluntarily quit their posts,” said Punjab Congress leader Sukhpal Singh Khaira. “They should do it without testing the patience of either the party high command or Sidhu.”

Sidhu’s critics though say he is frustrated over his chief ministerial ambitions getting jeopardised. He knows that if the Congress wins under Channi, who has demonstrated that he is no pushover, he cannot become chief minister.

Meanwhile, his equation with former Congress chief Rahul Gandhi and party general secretary Priyanka Gandhi is said to have worsened. His resignation has come as a huge embarrassment to them, especially at a time when they are attempting to restructure the party in other states, too.

True to his image, Sidhu has added more twists to the Congress’s Punjab story.