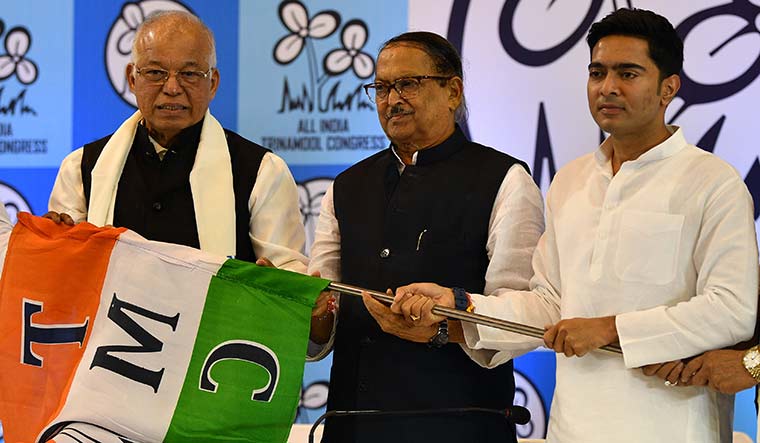 The exit of Luizinho Faleiro, former chief minister and Navelim MLA, from the Congress has set alarm bells ringing for the party in Goa. Faleiro has been reportedly offered a Rajya Sabha seat by the Trinamool Congress, which hopes to benefit from his experience as AICC in-charge of the northeastern states as it expands its base in Assam and Tripura.

Faleiro’s resignation as MLA has reduced the tally of the Congress to four from the original 17 who had won the 2017 elections on the party ticket. The four legislators who remain with the Congress are former chief ministers Pratapsingh Rane, Ravi Naik, Digambar Kamat and three-term legislator Reginaldo Lourenco.

Rane is not keen to contest the 2022 elections, while Kamat and Naik remain chief ministerial aspirants. That leaves Lourenco, who has never been a minister because he remained loyal to the Congress even when his 10 colleagues migrated to the BJP in 2017. Both the Aam Aadmi Party (AAP) and the Trinamool have sent feelers to Lourenco, but so far he has not responded.

The Trinamool leadership has decided to contest all 40 assembly seats in the upcoming elections. Party leaders Derek O’Brien and Prasun Chatterjee have already visited Goa and held meetings with political activists from the Congress, the Maharashtrawadi Gomantak Party (MGP) and even some disgruntled elements from the BJP. Apart from Trinamool leaders, a team working for political strategist Prashant Kishor has also been active in Goa in order to meet influential citizens and gauge their minds before the Trinamool makes its entry in Goa.

Lavoo Mamledar, a former MGP legislator, is likely to join the Trinamool soon. Mamledar, who represented the Ponda constituency from 2012 to 2017, was sacked by the MGP. He now plans to contest from Marcaim, a seat held by MGP chief Ramkrishna alias Sudin Dhavalikar. Mamledar and Ponda Congress legislator Naik have reached an understanding following which Mamledar has decided to move to neighbouring Marcaim for a face-off with Dhavalikar.

The Trinamool has decided to use Goa and also Tripura, where it has similar plans, as launchpads for its national ambitions so that Mamata Banerjee can emerge as an alternative to Prime Minister Narendra Modi ahead of the 2024 national elections. The steps being taken by the party are clearly aimed at damaging the already weakened Congress in the two small states by poaching the leaders from the grand old party in order to establish a base for itself.

Chief Minister Pramod Sawant has termed it as a “form of political tourism”. On the other hand, AICC in-charge of Goa, Dinesh Gundu Rao has sharply criticised the Trinamool’s approach. He said the Trinamool was suddenly entering the state and was poaching leaders from other parties which was not healthy for democracy and for the politics of Goa. “We were aware of the move by Faleiro and his supporters. Faleiro has lost touch with the people from his constituency,” said Rao.

Goa state Congress chief Girish Chodankar was even more aggressive. He said Faleiro had made arrangements for his retirement after enjoying the fruits of power when he was in the Congress. “What he has done is not good as he left when the party needed him the most to take on the BJP,” he said.

While he was in the Congress, Faleiro was not getting along with Chodankar and opposition leader Kamat. Repeated pleas by Faleiro and other Christian Congress leaders to change the state leadership fell on deaf ears as Chodankar and Kamat enjoyed the high command’s firm backing.

After Faleiro’s departure, Chodankar promptly convinced former minister Avertano Furtado to join the Congress. Furtado had won from Navelim in 2012 as an independent, defeating Churchill Alemao, and became a minister in the Manohar Parrikar government. He lost to Faleiro in 2017. He will now be the Congress candidate from Navelim.

Earlier, the Congress was talking about contesting all 40 seats, and had ignored calls for alliance given by the Goa Forward Party (GFP) and the Nationalist Congress Party (NCP). After Faleiro’s departure, Rao, however, has spoken about forming an alliance with like-minded parties to take on the BJP.

Veteran political analyst and editorial director of Gomantak, Raju Nayak, said the continuation of Chodankar and Kamat had further alienated Christian voters. “Chodankar has not been able to win a single election as state president. Still the high command backs him,” he said. “It seems the Congress has just lost the desire to wrestle back to power and Rahul Gandhi appears keen on converting the Goa Congress into an NGO.”

Nayak said the Trinamool had twice contested elections in Goa, but could not manage more than five per cent of the votes. “This time, with support from Prashant Kishor’s team, it wants to lure away the Congress’s minority vote bank, which is unhappy with the politics of Kamat and Chodankar,” he said.

Nayak also warned that the Congress might soon lose Lourenco as well. “Lourenco has been ignored by the Congress despite being loyal to the party. He also does not get along with Chodankar. I will not be surprised if he chooses to leave the Congress and joins the AAP or the Trinamool,” he said.

Faleiro’s resignation and other developments in the Congress are turning out to be a blessing for the BJP. As the 60-65 per cent Hindu votes remain more or less behind the BJP, the minority Christian and Muslim votes will be divided among the Congress, the AAP and the Trinamool. Little wonder then Sawant was seen smiling upon hearing the news of Faleiro’s resignation. He said the Goa Congress was a sinking ship.

If the Congress fails to form an alliance with like-minded parties, it will face an uphill task during the assembly elections. On the other hand, if it manages to rope in the Trinamool, the GFP and the NCP to form a grand coalition, it will give the BJP a tough fight.