With elections on the horizon, Mayawati is hoping for a strong comeback 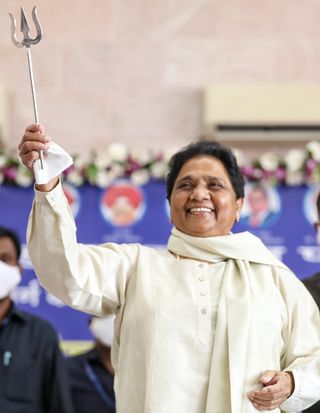 Raring to return: BSP chief Mayawati during a meeting with supporters at the party office in Lucknow | Getty Images

The 2022 assembly elections in Uttar Pradesh, among other things, will be a mandate on the future of the Bahujan Samaj Party and the political life of its president—Mayawati. The BSP, for now, has announced that it will be going it alone. This is not new in the BSP universe. The party’s only pre-poll alliances for the state elections were in 1991—with the Samajwadi Party (SP), and, in 1996, a trifold alliance with the Congress.

“There is a constant effort to create confusion among its voters that the BSP has been in alliances with other parties. Post poll alliances are different and they do not mean that the party is aligned with any other political outfit. It is only aligned with its community,” said Vivek Kumar, professor at Jawaharlal Nehru University. This bind with the community is illustrated by the BSP’s electoral performance. Even in its poor showing in the 2017 polls, the BSP had over 22 per cent of the state’s vote share, though this translated into just 19 seats. Since 2017, the party’s size in the assembly has shrunk by expulsions and desertions, thus rendering it irrelevant.

“The numbers prove that if the dalit voter has moved, he has moved from the Congress and the SP,” said Kumar. Conversely, this also means that the BSP is more hard pressed to attract to it new voters, as most of its old voters are still with it.

While that might hold good, there is also a first time deliberation about the rise of an alternate dalit leadership, say in the form of Chandra Shekhar Aazad and his Bhim Army. This rise is of particular relevance in western UP, said Ramesh Dixit, former head of political science at Lucknow University.

“The dalit voter of western UP is more educated and affluent. It has options beyond the BSP. The new generation of voters can no longer just be lured by caste. They won’t listen to Mayawati just because she is behenji,” said Dixit.

Till now the BSP’s winning formula has been the addition of votes from its candidates’ castes to its core supporters. But Mayawati has often said that while the dalit vote shifts to whichever other caste candidate the party pitches, the reverse has never been in the same magnitude. Thus, alliances do not benefit her party as much as they should. Logically, then, going alone in the polls is always the better option.

Chandra Prakash Rai, a Lucknow-based political analyst, said Mayawati was only doing politics “out of obligation” and it was limited to biding time till she could prop up a second line (her nephew) in the party. However, if the BSP has been lying low in the past months, so have the other parties.

It is only the BJP, with the state machinery to grant itself the permission for political activity, which has been seen and heard through the pandemic.It must be considered that agitational politics has never been the style of the BSP. Its founder, Kanshi Ram, believed in not frittering away energy and time responding to what others were doing, but quietly working on the ground.Mayawati has adhered to this for now. And, perhaps, even gone beyond by rolling out a template in the form of the Prabudh Varg Sangosthi, which the BJP had to respond to. Her announcement to not give tickets to mafias will also force other parties to match it.

Mayawati’s intention to fight the elections alone is not a dare. Between the state’s other face—Akhilesh Yadav and her, she is the one with the greater experience to do so. Yadav’s success in 2012 is not credited to him but seen as a spill over from his father’s antecedents. This is the first election where he is alone (within the party) and will thus offer a truer picture of his political stature.

Contrary to those who are writing her political obituaries, or, worse still, cementing her position as BJP’s ‘B’ team—which had an unspoken commitment with the party—Rai said Mayawati still had it in her to swing upwards. “The party should not sell its tickets. It should pick up credible faces from across communities and finance their elections,” said Rai. (The selling of tickets is a reference to the BSP’s giving of tickets for money, which is explained as necessary to keep the party machinery rolling).

There is also the debate of which way the state’s Muslim voters will tilt. That question posed in 2017—that this is an election of survival for Muslims of the state—is today more urgent. If that fear prompts Muslim votes to stay united, it will shift to the party it aligns with most naturally. In this shifting, the perception of being a ‘BJP B team’ can ruin the BSP’s act.

Another perception that Mayawati is soft on the BJP as she fears investigations by Central agencies fuels speculation that for her this election is only important as a bargaining chip. When, a very likely, anti-incumbency factor hits the BJP government in the state, she needs to have the numbers to bolster it. Mayawati is unlikely to seek a position in state politics, but she could use it to ensure for herself the safety of a position at the Centre. Elections in UP are still some way off. Some way is a long way in politics and equations could change for the BSP. Whatever those new equations may be, it will not be a party that will be buried without a fight. That is not in Mayawati’s nature.