Mamata Banerjee wants to not only win Bhabanipur, but also weaken the BJP Reaching out: Mamata Banerjee at the Gurdwara Sant Kutiya in Bhabanipur | Salil Bera

The battle of Bhabanipur is no mere byelection. On September 30, West Bengal Chief Minister Mamata Banerjee will take on the BJP’s Priyanka Tibrewal in a contest with much context. Banerjee had lost in Nandigram in this year’s assembly elections, and needs to win a bypoll by November 5 to keep her office.

Worryingly for Mamata, the Central Bureau of Investigation is probing the post-poll violence in the state, and the role of Trinamool leaders in it. Also, the agency recently interrogated a state minister in a Ponzi scam case, while the Enforcement Directorate summoned Mamata’s nephew and party MP Abhishek Banerjee, along with wife, Rujira, to investigate their alleged role in a coal scam.

As the ground heats up before the clash, THE WEEK visited the constituency to gauge the voters’ mood. In the Chakraberia locality, where people are tightlipped about the election, Sunil Yadav, a Bihari clothes seller, said: “Ask me when my stuff will sell rather than asking me about my vote. I have no idea where I would vote. There is no business happening, even though Durga Puja is around the corner. No one is bothered about us, the common people.”

His footpath stall stood near a big clock shop, whose Marwari owner was not too enthused about the poll. “I have not decided [if I will vote],” he said, turning his back.

Near Rabindra Sarobar Stadium, just behind Kalighat fire station, sweets shop owner Swapan Sarkar answered the question with a laugh. He said he was not part of the Bhabanipur constituency. He belonged to the bordering Tollygunge seat, which had re-elected the Trinamool’s Aroop Biswas instead of Babul Supriyo—who was then with the BJP. “If I were a Bhabanipur voter today, I would have voted against Mamata Banerjee for taking him into the party,” he said.

In recent days, four BJP MLAs and one MP (Supriyo) have joined the Trinamool. Apparently, many of those who had jumped ship to the BJP want to swim back home. They have been meeting either Abhishek at his Camac Street office in Kolkata, or Mamata herself. A retired IPS officer—who was given a ticket soon after he joined the BJP—is in talks with Mamata to join the Trinamool. As are two MPs. All the deals are being carefully drawn up at the party’s top level.

Mamata’s strategy to demolish the BJP in Bengal is multi-pronged. She is trying to lure BJP MLAs who won their seats rather than those who had left her for the BJP and had lost.

Second, Mamata is targeting the BJP in north and western Bengal, where it is strong. That the BJP is still focused on these parts was evident when Sukanta Majumdar, an RSS leader from the north, replaced Ghosh as state party president.

Mamata is also trying to break the BJP in Tripura, which would halt the BJP’s spread in the northeast and could affect its level of influence in Bengal. There is internal rivalry in the Tripura BJP, which could help the Trinamool. 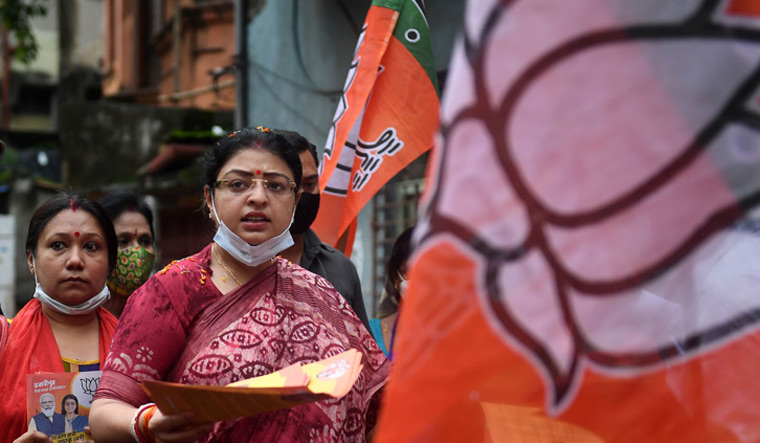 Beyond Bengal, Mamata would aim to get Akhilesh Yadav a larger share of the Muslim vote in the upcoming Uttar Pradesh assembly elections. Usually, the community’s vote gets split between the SP, the Congress and the Bahujan Samaj Party, giving the BJP an advantage. Mamata has already met Akhilesh in Delhi to chalk out plans for the campaign.

Interestingly, the BJP’s national leadership has not intervened in Bengal so far. No state in-charge—Kailash Vijayvargiya, Arvind Menon or Shiv Prakash—is in Bengal for the byelection; their attention is on poll-bound Uttar Pradesh.

In Bhabanipur, though, the story is different. The local RSS, the Vishva Hindu Parishad and allied groups are working hard to defeat Mamata.

The BJP candidate, Tibrewal, was among those who had moved the Calcutta High Court over the post-poll violence in May. But she was reportedly not the party’s first choice. The BJP had considered former Meghalaya and Tripura governor Tathagata Roy, state party vice president Pratap Banerjee and a few others, but none of them apparently wanted to take on Mamata.

Asked about it, Dilip Ghosh said: “What can I say? Apparently, this is merely a byelection. So none of them wanted to accept the candidature.”

In the 2016 assembly elections, Mamata had won Bhabanipur by around 25,000 votes, thanks to the Congress-left alliance. Some say that, had the BJP not contested, Mamata might have lost to the Congress’s Deepa Dasmunsi.

Bhabanipur has around 75 per cent Hindu voters; 35 per cent of them Marwaris, Gujaratis, Biharis and Punjabis. Tibrewal is a Marwari.

“[However] the solid vote bank of the BJP—non-Bengalis—do not like to vote during assembly elections,” said BJP leader Chandra Bose. “They vote only when the election is to determine the fate of Narendra Modi. The BJP would have to bring these voters out of their homes. Otherwise it would lose by a big margin.”

The 25 per cent Muslim population has voted for the Trinamool in the past few elections, but the Bengali Hindus in the area have been split between the Congress and the Trinamool. But now that the Congress is not contesting—it has left the seat to the Communist Party of India (Marxist)—the question is where those voters would go: BJP or Trinamool?

If most of them vote Mamata, her margin of victory would be huge. If not, and the non-Bengalis also come out, it might be a bit of a squeeze for her. She had recently met Congress president Sonia Gandhi and MP Rahul Gandhi and had inducted family members of late Congress leaders—such as Pranab Mukherjee’s son, Abhijit, and Somen Mitra’s wife, Sikha—into the Trinamool.

Mamata might be seen as going soft on the Congress in Bengal, but at the national level, her team is making it clear to all anti-BJP parties that only she can take on Modi. “Of course, it is true. It is not Rahul Gandhi, but Mamata Banerjee who can be the right person for those who want to vote against Modi,” said Trinamool MP Saugata Roy.

Mamata is taking no chances in the run-up to the byelection. She has been meeting and trying to convince Sikh voters about the negative impact the farm laws would have on the people of Punjab. Abhishek, meanwhile, has been telling Marwari and Gujarati families that he will “throw out” any local leaders hounding them for money.

The poll arithmetic might work in Mamata’s favour, but she would want to make sure her win is as huge as possible; it would send a message to the Gandhis about her electoral might. If she wins by anything less than 20,000 votes, the BJP would try to portray it as a dip in her popularity and would accuse her of ruling with “police might” and not popular support. What if Mamata loses? It is not likely, but it would be a miracle for the BJP if she does, and a disaster for Mamata.