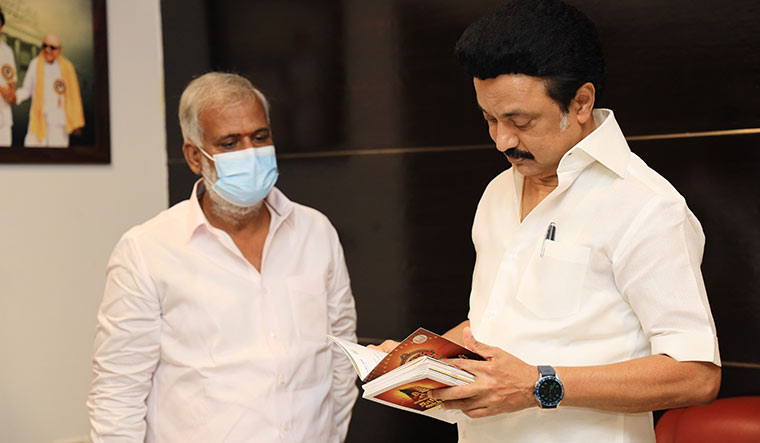 ON AUGUST 14, Tamil Nadu Chief Minister M.K. Stalin handed over appointment orders to priests, 24 of them non-Brahmins, in temples that come under the Hindu Religious and Charitable Endowments (HR&CE) department. Posts for othuvars (hymn reciters), poosaris, mahouts and garland stringers were also filled.

“With these appointments, the wish of our leader Karunanidhi—who sought to fulfil Periyar’s dream of making people of all castes archakas (priests)—has been realised. It was achieved after drawn-out legal battles,” said HR&CE Minister P.K. Sekar Babu.

Periyar E.V. Ramasamy had held a meeting on the issue a week before his death in 1973. Karunanidhi had, in May 2006, passed a special government order facilitating the appointment of qualified archakas of all castes. A decade and a half later, Stalin has gone a step further with the appointments. “This has been a long battle and the new appointments are a triumph of Stalin and the DMK, who follow in the footsteps of Periyar,” says political observer and academic P. Ramajayam.

A week after the appointments, a series of writ petitions were filed in the Madras High Court assailing the appointment of non-Brahmin priests. Stalin had challenged the domain of the right-wing groups, particularly the BJP, which had been trying to “liberate temples from the clutches of the government”. The party’s manifesto for this year’s assembly elections had promised to curtail the HR&CE department’s powers. It proposed handing over administration of Hindu temples to a separate board consisting of Hindu scholars and saints.

Stalin, however, went the other way. In the past three months, the hitherto low-profile department has received attention like never before. Stalin chose provocative grassroots politician Sekar Babu and tech-savvy bureaucrat J. Kumaragurubaran as minister and commissioner of the department, respectively.

For Stalin, the successful functioning of the department is politically significant. The BJP’s efforts to make inroads into Dravida land had become stronger since the deaths of former chief ministers Karunanidhi and J. Jayalalithaa; at one point, Stalin was forced to clarify that the DMK was not “anti-Hindu”, and that it respected all religions. To further his point, he chose the HR&CE office in Chennai to launch a drive to plant one lakh saplings on Karunanidhi’s third death anniversary on August 7.

After he took over, Stalin’s first salvo was against spiritual guru Jaggi Vasudev, who was campaigning to hand over temples to devotees. Finance Minister Palanivel Thiaga Rajan called Vasudev a “publicity hound” and dismissed his campaign. 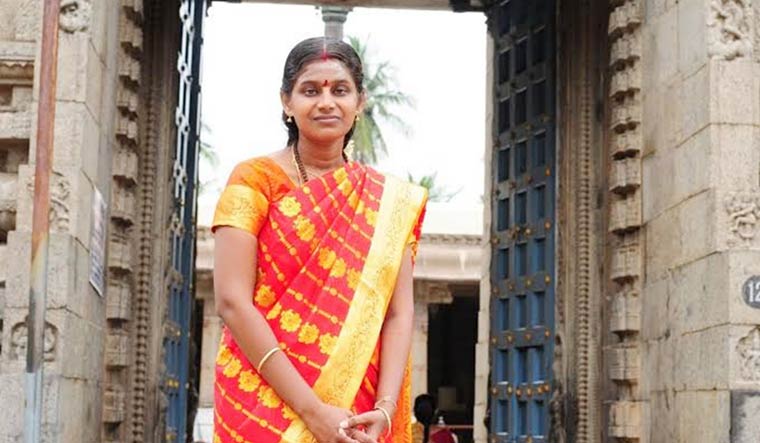 Within a fortnight, in his first meeting with department officials, Babu issued an order asking them to be transparent about assets held by temples and to upload all relevant documents online. All 44,121 temples under the HR&CE department implemented the order. “Besides ensuring transparency, digitisation will leave no room for any further tampering of the documents,” a senior bureaucrat told THE WEEK.

The next announcement was the creation of a call centre to exclusively receive complaints or suggestions from devotees. The centre is located in Chennai and is open from 10am to 6pm on all working days.

Then came a slew of initiatives, including a drone and DGPS (digital global positioning system) survey of all temple land, asking every temple to clear encroachments on its land, and recruiting licenced surveyors to keep a tab on such encroachments.

The most important of these was the appointment of women priests and allowing priests to chant Tamil as well as Sanskrit mantras, while performing archanai (rituals), as preferred by the devotee. “It is my dream come true,” says Suhanjana Gopinath, who took over as the first woman othuvar at Dhenupureeswarar temple in Chennai on August 18. “To me, engaging women as priests is part of the larger social engineering initiative to ensure equal participation and to provide opportunities to women.”

At least 47 temples have been allowed to perform Tamil archanai. “Our leader Karunanidhi had mooted the idea in 1971, and the then HR&CE minister M. Kannappan had made an announcement. In 1974, a circular was sent to temples,” says Sekar Babu.

Though 24 non-Brahmin priests have been appointed for now, the second set of orders is imminent. To train them, the archaka payirchi palli (priest training schools, across castes) have been revived across the state. Though the previous AIADMK government had turned them into Veda patashalas (Vedic schools), the Stalin government wants to retain the patashalas and also run the training schools.

As for encroachment, the HR&CE department has reclaimed land worth Rs641 crore in the past three months; it plans to retrieve land worth more than Rs1,000 crore soon.

On September 13, the assembly passed a bill to make encroachment of properties belonging to religious institutions a cognisable and non-bailable offence. “The hindutva practised by the BJP since 1989 has not worked in Tamil Nadu,” says Ramajayam. “They might have won a few MLAs in 2001 and now, but that does not mean that the people have accepted their hindutva agenda.”

The HR&CE department has been tactful in its initiatives so as to not irk practising Hindus. The government has said that schools, colleges and libraries would come up on the retrieved temple land, a move that any opposition party would find hard to oppose. “Even if they oppose it, the practicing Hindus will stand behind the DMK as it is participative secularism,” says linguistic activist Aazhi Senthilnathan, who closely follows temple management practices in Tamil Nadu. “The DMK has only democratised the existing setup and ensured social justice. Tamil Nadu has the best temple management system and it is because of the HR&CE department.”

In this backdrop, the BJP’s ploy of gaining support in the name of religion seems to have hit a roadblock. Recently, when the DMK government banned public gatherings for Ganesh Chaturthi, state BJP president K. Annamalai called the move anti-Hindu and asked supporters to send Stalin Ganesh Chaturthi greeting cards. The protest found few takers.

This was because the DMK had consciously moved away from the days of Karunanidhi apparently calling Hindus thieves, and is now focused on being a secular guardian of religious practices. Sources close to the chief minister’s office told THE WEEK that Stalin’s very first instruction to a set of bureaucrats was to make people understand that he and the DMK were not against any religion. “The DMK’s ideals are social justice and rationalism, which are against superstitions and exploitation in the name of religion or God,” says Ramu Manivannan, head, department of politics and public administration, University of Madras.

Like Mamata Banerjee in Bengal, Stalin wants to ensure that the BJP cannot put him on the back foot by playing the hindutva card. “The notion of hindutva is quite different from Hinduism,” Thiaga Rajan told THE WEEK. “What we are seeing in Tamil Nadu is Hinduism and not hindutva. Tamil Nadu has been the most practising Hindu state. From the 1920s onwards, the practice of Hinduism has been completely democratised. We are only following in the footsteps of our ancestors. Anna (C.N. Annadurai) came to power in 1967 and said we are the descendants of the Justice Party. My grandfather, as the HR&CE minister, opened temple trusts to non-Brahmins. This was done to democratise temples. Then the DMK made the temple trustee board more inclusive by adding one Adi Dravida and one woman. This has been our agenda. The BJP was born only in the 1980s, but we have been practising Hinduism even before that.”