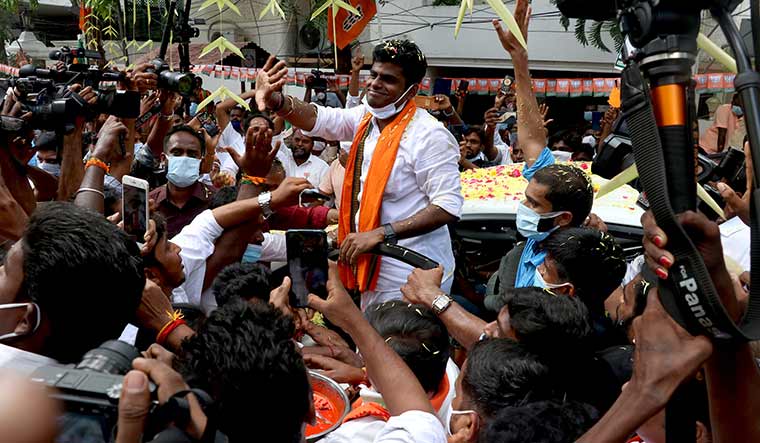 THE PICTURE SAID it all. On July 15, at an event in which former IPS officer K. Annamalai took charge as president of the BJP’s Tamil Nadu unit, party veterans Pon Radhakrishnan and H. Raja were photographed looking at the sky mournfully. They stood in a corner of the dais as Annamalai sat on the president’s chair. The picture soon went viral on social media.

As state BJP president, the 36-year-old Annamalai succeeds L. Murugan, who was recently made Union minister. An articulate leader with a fan base among the youth, he is considered close to the BJP’s national leadership. “He is young and energetic,” said party spokesperson Narayanan Thirupathy. “Our leaders wanted a young face who can fight the major dravida parties in Tamil Nadu.”

Annamalai’s political rise has been rapid. Before he joined the BJP in August last year, he was an IPS officer in Karnataka and was known to be close to B.L. Santhosh, the party’s national general secretary. A member of the dominant Gounder community in Tamil Nadu, Annamalai made a name for himself with his spirited, and often communally polarising, speeches against the dravida ideology in general and the DMK in particular. He was soon made the party’s state vice president. According to BJP sources, Annamalai has been promoted with the objective of side-lining veterans like Radhakrishnan and Raja, whom the national leadership consider a burden.

Annamalai is expected to fetch Gounder votes in the Kongu belt in western Tamil Nadu, which has long been an AIADMK stronghold. The region is dominated by three castes—Kongu Vellalar (Gounders), Arunthathiyar and Devendrakula Vellalar—and has 57 assembly seats, 41 of which were won by the AIADMK in the assembly polls this year. The party could win only 15 seats outside the region.

Murugan belongs to the Arunthathiyar community, which is part of the dalit fold. His elevation as Union minister is expected to win support of dalits, who make up 21 per cent of the state’s population. Currently, the Viduthalai Chiruthaigal Katchi led by Thol Thirumavalavan, a DMK ally, enjoys a lion’s share of the community’s support. A vocal critic of hindutva politics, Thirumavalavan recently gave the BJP the thumbs up for inducting a dalit leader from the state into the Union ministry.

Apparently, the BJP’s immediate aim is to keep the AIADMK in check. “The BJP wants to send a message to former chief minister Edappadi Palaniswami that it can weaken the AIADMK in the region if it does not continue to ally with the saffron party,” said political analyst Raveenthiran Thuraisamy.

The AIADMK is in a spot because of the widening rift between senior leaders Palaniswami and O. Panneerselvam, and former party chief V.K. Sasikala’s plans to re-enter politics after being released from prison. “The BJP wants to keep the AIADMK tussle alive, as it would benefit the national party in the Kongu region,” said academic P. Ramajeyam.

Experts say the BJP, which has been opposing dravida politics, is in no position to go it alone in the polls. “It cannot gobble up the AIADMK and come to power, when it is not even in the third position,” said political analyst Aazhi Senthilnathan. “How can the party grow when it talks against the state’s interests on every issue?”

The BJP’s national leadership, however, wants Annamalai to realise an ambitious goal: hard-sell its hindutva agenda. “I will take our ideology to doorsteps all over the state,” said Annamalai, who has set a target of 150 seats in the next assembly polls. Sources say he would remain president at least till the next Lok Sabha polls—in 2024.

Annamalai’s first major move since becoming party chief, however, has turned out to be a damp squib. His call for a major protest against the construction of a dam across the Cauvery at Mekedatu in Karnataka has failed to garner support. Worse, BJP leader and Karnataka Chief Minister Basavaraj Bommai has asked the Centre to ignore Annamalai’s opposition. “Let Annamalai protest; it is not related to us,” said Bommai. “We will build the dam. I don’t care what he says.”

Annamalai also got into a war of words with DMK leader Dayanidhi Maran, who sarcastically suggested that the BJP chief can help solve the dispute by leading a delegation of party colleagues to Karnataka. Annamalai struck back saying he was “always ready for our farmers”, unlike Maran “who watches T20 matches in the middle of a pandemic”.

“Also, I request him to kindly loan his family’s personal jet so that my simple and humble farmer friends can reach there faster. Will his uncle, [Chief Minister] M.K. Stalin, agree to this?” he tweeted. DMK supporters later trolled Annamalai saying he could ask for the special aircraft used by the prime minister, as neither Stalin nor Maran owned a jet.

Annamalai’s aggression may help him remain in the news, but whether he can convert it into votes remains to be seen. His elevation may also intensify intra-party feuds, as senior leaders and their loyalists are not happy with the new leadership. The BJP in the state has long been perceived as a party of, and for, Brahmins, but with Annamalai and Murugan coming to the fore, power equations have changed.

Political analysts say the BJP still has a long way to go before it can come to power in the state. “Mere manipulation to reach the first place cannot be called a strategy,” said Senthilnathan. “The party has so far been sticking to the strategy of using its power in Delhi to disintegrate one of the dravidian parties. It is a gross miscalculation.”