BJP's challenges in Bengal: Saving its workers from violence and keep its flock together 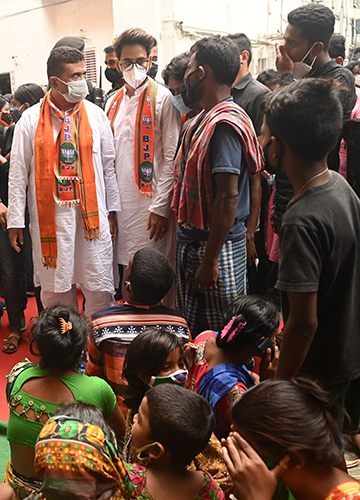 ABUL KALAM MOLLAH is not a BJP member, but he did campaign for the party in the recent state elections. “I was part of the election meetings in the area, and was labelled a BJP man,” he said.

On May 2, after the Trinamool Congress romped back to power by winning 213 of 294 seats, its party workers allegedly destroyed and ransacked Mollah’s home and stationery shop in Sandeshkhali, North 24 Parganas. “A gang of Trinamool men stoned me. They threatened me and asked me to leave the village. I left with my wife and children,” he said from an undisclosed location in South Bengal. “My family is with my wife’s parents now.” Mollah was afraid to reveal much, fearing the wrath of the newly elected government.

While officials said that around 20 people had died in post-poll violence, the BJP said the number was much higher. It claimed that 90 per cent of those killed were its members, while a few Trinamool workers in North Bengal had died in counterattacks. According to party estimates, more than 50,000 people have been displaced internally in the state. BJP workers said the police refused to file any first information reports.

Said a senior police officer on condition of anonymity: “[Investigation of] murder cases would automatically begin [based on post mortem reports]. But cases of arson and loot would require further investigation. The police will definitely reach the victims and ensure rule of law.”

The police have also been dealing with fake posts and doctored videos on social media, which have been adding fuel to the fire.

Within a day of violence breaking out, the Union home ministry had sent a team to Bengal to assess the law and order situation. It also sought a report from Governor Jagdeep Dhankhar, who called the situation “horrific” and blamed the administration for “lack of action”.

Like the home ministry team, Dhankhar will also travel across the state to review the situation. The last time a Bengal governor did something like this was in 2007, when Gopalkrishna Gandhi visited Nandigram after violence broke out there.

Said senior Trinamool leader and former North Bengal development minister Rabindra Nath Ghosh: “Things are being blown out of proportion. Attacks are minimum. The BJP is trying to give it a communal spin. Sporadic poll violence is nothing new in Bengal.”

Local BJP leaders, however, refused to buy this argument. “Just ask them to come to Basirhat and Sandeskhali,” said BJP leader Chinmay Sinha. “I am a block vice president of the party, but I was driven out of my village [on Baunia Island in the Sundarbans] and people from a particular community have asked me not to come back.”

He said the party was informed about the attacks, but it could not give shelter to so many people overnight. “My party has asked us to arrange shelter on our own, till it comes up with other solutions,” he said. Sinha added that many Trinamool workers had come forward to help, “but the majority with a certain allegiance did not let that happen”.

A few years ago, Radharani Mandol of Harwood Point in South 24 Parganas joined the BJP after Trinamool workers allegedly grabbed her land. “The BJP leaders assured me of justice once they won Bengal,” she said.

Unfortunately for her, that did not happen. On May 4, local goons attacked her home. “My husband (an ailing Pintu Mandol) was shaken seeing our daughter, just 14, being molested,” said the housewife. “They pressed her cheeks and tried to gag her.”

Radharani called on her neighbours, also BJP supporters, to fight off the attackers. The attackers fled, but promised to return. “We told the Trinamool goons that we would also win one day,” she said. “[And] then we will take revenge. Such crimes cannot happen without [the knowledge] of [Chief Minister] Mamata Banerjee.”

Said Giasuddin Molla, former minority affairs minister of state: “I admit that such incidents happened shortly after the results were out. This happened only because the BJP had created a tense situation ahead of the polls. It tried to cover Bengal with terror. So, people have shown their anger after the results.”

Notably, many BJP workers have blamed their own leaders, too. “You (top leaders) have made an adjustment [with the Trinamool] and that is why you are not hitting the streets and seeking a recount,” said Raj Sarkar, a BJP worker in Raina, Purba Bardhaman, in a video online. “We at the ground level are suffering. Our homes are being attacked.”

Senior BJP leaders who were tasked with winning Bengal, like Dilip Ghosh, Kailash Vijayvargiya and Shiv Prakash, were called to Delhi for an emergency meeting. The party has to shield them from further flak from workers.

Neither Vijayvargiya nor Shiv Prakash was available for comment. However, BJP national secretary Arvind Menon told THE WEEK: “The party won 50 seats in the zone where I worked. The Trinamool today is hitting our booth workers to finish us at the grassroots. We have the big challenge of retaining booth-level workers.”

Though the BJP went from three seats in 2016 to 77 this time, it conducted a small study to ascertain why it lost; the reasons include the side-lining of Mukul Roy, over-reliance on some defectors, the lavish lifestyles of certain leaders, the removal of some district presidents, and the lack of coordination between the Delhi, Kolkata and district offices.

Currently, the BJP is busy keeping its flock together; there were rumours of a mass defection to the Trinamool, including by Mukul Roy, and Rajib Banerjee, a former Trinamool minister who had jumped ship a few months ago.

Sources said that Roy’s perceived closeness to Mamata in the past few months had created distance between him and the BJP central leadership. Suvendu Adhikari, who defeated Mamata in Nandigram, was given more prominence. This feeling was reinforced when Adhikari was named leader of the opposition in the assembly.

However, the BJP seems to have made peace with Roy; he tweeted about his “continued struggle” for democracy as a BJP “soldier”.

The party workers, it seems, are not top priority at the moment.