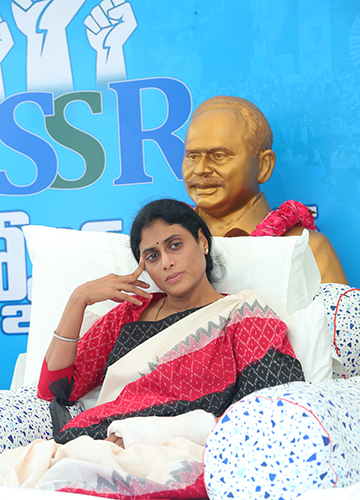 IN JANUARY, THE TELANGANA Jana Samithi (TJS) approached the police for permission to hold a protest at Dharna Chowk, one of the oldest venues for public agitations in Hyderabad. But the three-year-old party’s request was rejected. Until recently, TJS was the youngest political outfit in Telangana, launched with popular faces and some hype.

“We wanted to hold a two-day protest at Dharna Chowk,” said M. Kodandaram. “When permission was denied, we requested the police to let us to protest for a day. That, too, was rejected.” The TJS had planned a protest on five issues, including the urgent need to provide jobs to the youth. A former Osmania University professor, Kodandaram had led the Telangana Joint Action Committee which fought for the formation of the new state; he later declared war on the Telangana Rashtra Samithi and co-founded TJS.

Where the TJS failed, Y.S. Sharmila—daughter of Y.S. Rajasekhara Reddy, former chief minister of united Andhra Pradesh; sister of Andhra Pradesh Chief Minister Y.S. Jagan Mohan Reddy—succeeded and how. In April, she and her supporters held a one-day protest at Dharna Chowk and raised the same issue that the TJS was raising—youth employment. A few days before that, she had held a huge public meeting in Khammam, south Telangana. She flayed the K. Chandrashekar Rao government on a variety of issues ranging from education and health care to agriculture and housing. At Khammam, she dropped a bombshell: “We are going to start a party. It will bring back the YSR era.”

The new party will be launched on July 8—Reddy’s birth anniversary. This will be the second party from the house of YSR; the first being the YSR Congress Party founded by Jagan. Sharmila is clear that her party will take on the TRS. The TRS, however, is maintaining a stoic silence; state units of the Congress and the BJP, too, are watching warily. But what was more surprising was the positive coverage she received from a section of the media, known to be soft towards the Telugu Desam Party and its supremo N. Chandrababu Naidu.

The sequence of events, which has been unfolding since the beginning of the year, has raised speculations over the probable forces behind Sharmila. Pitta Ramreddy, a close associate of Sharmila, said they did not have the support of any political party. “The TRS government was compelled to give us permission since they were also holding public meetings for by-elections,” he said. “We have not sought help from anyone and we do not have to.”

Ramreddy is confident that many leaders from other parties will soon join them. “We have got calls from senior leaders, including MLAs, pledging support,” he said. “They are from almost all major parties including the TRS, Congress and others. All of them see a strong and credible leader in Sharmila garu, who carries YSR’s charisma. The response has been overwhelming and we are confident we will make a huge difference in state politics in the coming days.”

Sharmila’s next move will most likely be the tried and tested gambit of the YSR family—padayatra. Her father walked for three months in 2003, covering more than 1,500km, which catapulted him to power in erstwhile Andhra Pradesh. In 2017, Jagan’s 3,600km-long padayatra, which stretched to over one and a half years, won him a landslide victory and the chief ministership. Now, keeping the 2023 assembly elections in mind, Sharmila is gearing up for a similar padayatra in Telangana, which may extend to more than two years.

However, Sharmila is not new to padayatras. In 2012, when Jagan was jailed in a disproportionate assets case, Sharmila went on a 3,000km padayatra to strengthen the newly-formed YSR Congress Party. Post that, she has only emerged from the shadows to support her brother during election campaigns. Though she has never contested an election nor held any crucial party posts, Sharmila is a confident speaker who connects well with the masses. A few slogans against Naidu and his son, popularised by her in the 2019 elections, clicked well with voters.

But Jagan has distanced himself from his sister’s decision to enter Telangana politics. He had taken a stand to steer clear of any political activity in Telangana as it would be detrimental to the interests of Andhra Pradesh; the two bifurcated states still have to sort out several issues. Sharmila, on the contrary, felt the need to further the goodwill her father garnered in Telangana and to revive the YSR family vote bank. While the family claims that there is no personal animosity between the siblings, the political rift is evident.

The big question though is which party stands to lose the most with Sharmila’s entry. If the powerful Reddy vote bank transfers its backing from the Congress to Sharmila, then the national party will be hit badly. A good number of voters had stayed with the Congress because of their loyalty to the late YSR. Sharmila’s biggest disadvantage is that she hails from Andhra’s Rayalaseema region; she is seen as someone who opposed statehood for Telangana.

“It is too early to talk about her,” said Congress spokesperson Sravan Dasoju. “Telangana has a special character and history and it is unlike any other state. The state was formed due to sacrifices made against the hegemony of Andhra leadership. In the long term, people will certainly question her and she will have to prove her commitment to Telangana. There will also come a time when she will have to fight her own brother on water issues between the two states. So, we will have to see how she deals with that.”

Political analyst Telakapalli Ravi agreed that only the Congress stands to lose with Sharmila’s political foray, but added that legacy alone will not help her. “There are major political parties like the Congress and the BJP. She has to overcome a lot of difficulties to get ahead of them,” he said. “Her scope is limited for now and she can be a minor player in the state. It looks like the TRS wants to create space for her and the BJP also wants her here.”