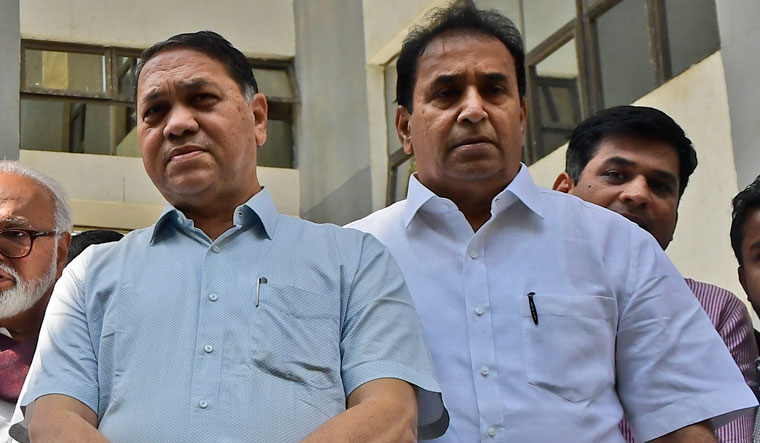 Troubled transition: Maharashtra Home Minister Dilip Walse-Patil (left) has a tough task ahead of him because of the allegation against his predecessor Anil Deshmukh | Amey Mansabdar

When Anil Deshmukh resigned as the home minister of Maharashtra on April 5, after the Bombay High Court ordered a CBI probe into the allegation against him, he attributed it to moral correctness. Most others believed it was the result of an order by party president Sharad Pawar.

Pawar, after discussions with Deputy Chief Minister Ajit Pawar, his nephew, decided to save his Nationalist Congress Party and the Maha Vikas Aghadi government from further embarrassment in the aftermath of the Antilia bomb scare. The Shiv Sena and the Congress, the NCP’s allies in the MVA, sought Deshmukh’s resignation since the controversy first came to light, but the NCP had been backing him. The High Court order made things easier for all three parties. The Maharashtra government has appealed in the Supreme Court and Deshmukh, too, was considering filing his own appeal.

Deshmukh’s replacement is Dilip Walse-Patil, an NCP veteran who was minister for labour and state excise. He represents Ambegaon, Pune, in the state legislature and is in his seventh consecutive term. Walse-Patil has experience in handling departments like finance, energy, and higher and medical education. A man of few words, Walse-Patil has the reputation of being highly efficient and a troubleshooter.

However, the task awaiting him is tough. He has to repair the immense damage done to the image of Mumbai and Maharashtra police after the arrest of assistant inspector Sachin Waze in connection with the Antilia bomb scare case and the alleged murder of Mansukh Hiren, and the allegation by former Mumbai Police commissioner Param Bir Singh that Deshmukh had given a Rs100 crore monthly extortion target to Waze and ACP Sanjay Patil.

The NIA, which is investigating both the Antilia bomb scare and the Mansukh Hiren murder cases, is slowly tightening its noose around Waze. It has already arrested suspended policeman Vinayak Shinde and Naresh Gor, a bookie, alleged accomplices of Waze. The agency believes that it was Shinde, who was convicted in the controversial Lakhan Bhaiya encounter case, who called Hiren for a meeting claiming to be “police officer Tawde from Kandivali crime branch unit” on March 4. Hiren was allegedly murdered that night; his body was found in a creek in Retibunder in Thane, Mumbai’s neighbouring district.

Investigators have so far recovered seven luxury cars—including a Mercedes-Benz, an Audi and a Prado—and a Benelli bike, which was used by Waze. In one of the cars, they found a currency counting machine and 05 lakh in cash. They are also probing the withdrawal of Rs26 lakh from a bank account jointly held by Waze.

NIA sleuths are questioning a woman named Meena George who they claim was seen with Waze at a five-star hotel in South Mumbai. Waze had booked a room at the hotel for 100 days, under the name Sadashiv Khamkar. The NIA searched Meena George’s residence at Meera Road on the outskirts of Mumbai. They are also investigating her bank accounts and transactions.

The NIA suspects that Hiren’s death was planned as Waze considered him a weak link in the Antilia bomb scare drama. According to Hiren’s family, Waze had told him to get arrested and assured him that he would be out on bail in three to four days. But Hiren did not agree and remained firm that his SUV, which was found outside Antilia laden with explosives, had been stolen on February 17 from the Eastern Express Highway, where he had parked it after a technical snag.

Investigators believe that Waze took a train from the Chhatrapati Shivaji Terminus to Kalva on March 4 and asked Hiren to meet him there. The NIA has also recovered a laptop, a digital video recorder and a scanner, allegedly used by Waze, from the Mithi River. It suspects that Hiren was smothered by Waze’s associates and then his body was dumped in the creek to make it look like a suicide. It is not clear yet whether Waze was present as he has an alibi—he claims that he conducted a raid on a bar in Dongri in South Mumbai the same night.

The NIA team also recovered the number plate of a Maruti Eeco van from the river. The van had been stolen from Aurangabad a few months ago; the owner is a government servant who has no clue how his number plate ended up in the river. Waze was reportedly planning an ‘encounter’ of a couple of small-time goons in this van; he would then claim he had solved the Antilia bomb scare case, and thereby clear Hiren’s name. However, this theory could not be verified as NIA officers in Mumbai were tight-lipped.

NIA sleuths also suspect that the Antilia episode had been planned to extort its owner, Reliance Industries chairman Mukesh Ambani. A senior IPS officer from Maharashtra, who requested anonymity, felt that there were three motives—earning laurels after claiming to have solved the case; gaining proximity to the Ambanis and getting in the good books of the ruling dispensation in Delhi through the Ambanis.

The role of at least half a dozen police officers, including an IPS officer, is being probed by the NIA. After Deshmukh’s resignation, former chief minister Devendra Fadnavis said that more skeletons would tumble out soon. Sure enough, a letter to the NIA court, dated April 3 and signed by Waze, named transport minister Anil Parab of the Shiv Sena as another cabinet member who had given him a collection job.

The letter says that Parab asked Waze to “look into the SBUT (Saifee Burhani Upliftment Project) complaint” and “initiate primary talks to get Rs50 crore from the SBUT to close the preliminary inquiry”. In a news conference on April 7, Parab denied Waze’s allegations and said he is willing to face any inquiry. He added that this was the BJP’s plot to defame the MVA. State BJP president Chandrakant Patil had already told party workers that one more minister will have to resign in the next fortnight. The letter has definitely put Parab and the MVA in a difficult position.