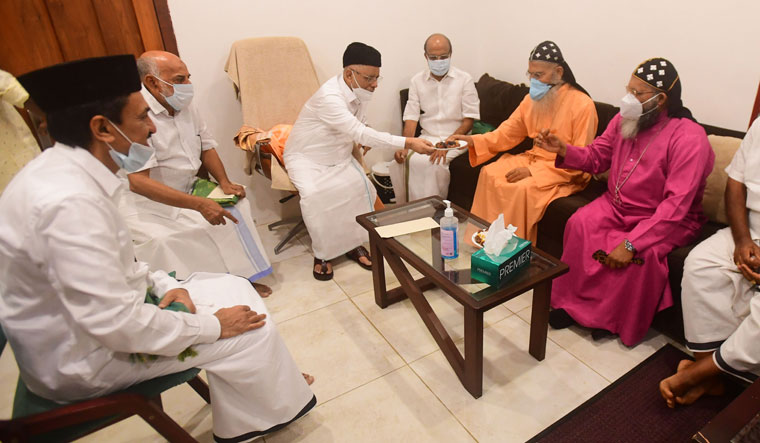 The term ‘minority’has been associated with many things—from marginalisation and alienation to ghettoisation and deprivation. Not in Kerala, though. It is perhaps the only state in India where minority communities are on an equal, if not better, footing with the majority community—both financially and politically.

A bit of history first. Unlike in many parts of India, the origin of minority communities in Kerala is not linked to invaders. Both Islam and Christianity reached the state soon after they took birth. Arab traders brought Islam as early as the seventh century, while Christians in the state trace their roots to the storied visit of the apostle St Thomas in AD 52, much before Christianity reached Europe. Both the communities prospered in the largely peaceful and pluralistic milieu of the state’s prominent trading hubs.

“Christianity and Islam spread in Kerala in a peaceful and gradual manner; there has rarely been any clash with existing Hindu practices,”said writer and political observer M.N. Karassery. “Also, both the communities adapted to existing sociocultural practices and merged with the mainstream.”

A variety of socioeconomic and political factors—like the state’s migration-driven economic boom, the emergence of successful entrepreneurs, the attainment of high education levels (especially among Christians) and the presence of political parties catering exclusively to community interests (especially in the case of Muslims)—have contributed to the prominence of minority communities.

A league of their own

Even after the All India Muslim League (AIML) was formed in 1906, most Muslims in the state continued to support the Congress. Things began to change with the Malabar rebellion in 1921—a peasant uprising against the British that created rifts between Hindus and Muslims. After the revolt, the AIML began to make inroads in Malabar; in 1934, it defeated Congress stalwart Mohammed Abdur Rahman to send its candidate to the British legislature.

The AIML remained dominant in Malabar even after independence. In 1951, it renamed itself as the Indian Union Muslim League. The following year, it won its first Lok Sabha seat in Malappuram, now Kerala’s lone Muslim-majority district.

The ladder, the party’s election symbol since 1957, has now a religious following. Muslims, especially in Malabar, have been voting en bloc for the IUML for decades, often regardless of the candidate. Non-Malayalis like G.M. Banatwala and Ebrahim Sulaiman Sait have won several Lok Sabha elections in Malappuram.

The IUML has long been part of the Congress-led United Democratic Front. The CPI(M)-led Left Democratic Front’s efforts to make inroads in Malappuram—by befriending IUML rebels and a section of Sunni Muslims, who dominate the community—have not yielded much dividends.

“What works in the IUML’s favour is the concentration of Muslims in Malabar,” said political observer George Podippara. “They can easily win 30 seats in the region because of it. This has increased the party’s bargaining power [in the UDF].”

This position of strength did not come easy to the IUML. After Kerala was formed in 1956, both the Congress and the undivided Communist Party of India treated it as political pariah. The wounds of India’s partition had not yet healed.

In 1960, the IUML helped the Congress win the state, but got only the post of assembly speaker in return. Ties began souring, and the IUML brought the government down in a trust vote four years later. In 1967, it backed the CPI(M) and joined the ministry for the first time. The IUML helped carve out Malappuram district in 1969; since then, the district has been the citadel of its influence.

Except for its brief alliance with the CPI(M), the IUML has been a fixture in the Congress-led coalition for decades. One of its leaders, C.H. Mohammed Koya, even became chief minister with Congress support in 1979, albeit only for a few months.

The IUML, however, does not have a monopoly on Muslim votes. In 1989, the Samastha Kerala Jamiat-ul-Ulema, a body of clerics that leads the Sunnis in the state, split into ‘EK’and ‘AP’factions—after its leaders E.K. Aboobacker Musaliyar and A.P. Aboobacker Musaliyar. The EK faction supports the IUML, while the relatively weaker AP faction supports the LDF. 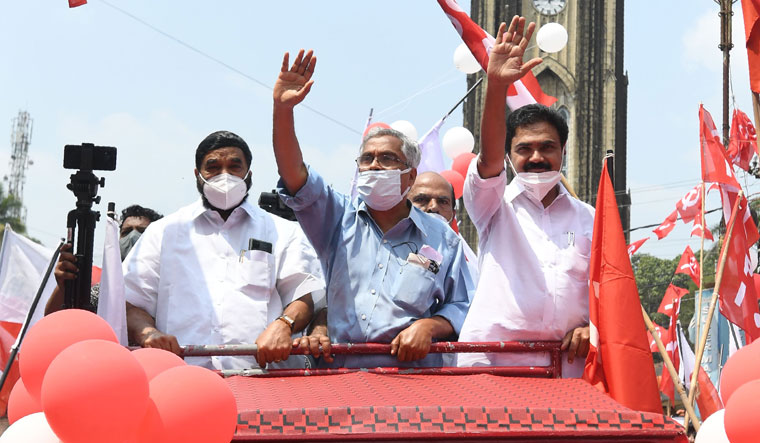 Prime position: Jose K. Mani of the Kerala Congress (M) (right), a new constituent of the LDF, at a rally organised by the front | Vignesh Krishnamoorthy

After the Babri Masjid demolition, the IUML’s “moderate and mature” stance came under fire. In 1994, a split in the party resulted in the formation of the Indian National League (INL), which is now in the LDF. “IUML leaders like P.K. Kunhalikutty have always given preference to protecting their business interests than to the community’s collective interest,” said INL leader N.K. Abdul Aziz.

According to him, the community is now going through a churn. “People have realised that most IUML leaders are compromised and that they would buckle under BJP pressure because of their wrongdoings. This realisation will certainly reflect in the coming elections,” said Aziz.

The Babri Masjid demolition had also led to the emergence of hardliners. Abdul Nasar Madani, a firebrand cleric, floated a party to oppose the IUML in the early 1990s. Currently, aggressive outfits like the Social Democratic Party of India (SDPI) and the Welfare Party of India (WPI) are vying for Muslim votes. “These groups may not be numerically strong, but their presence has compelled the IUML to take aggressive postures. This has resulted in the party alienating other communities,” said Karassery.

With its decision to ally with the WPI in the local body polls having backfired, the IUML seems to have realised the folly. “There is no comparison between the IUML and parties like the WPI and the SDPI,” said K.P.A. Majeed, the IUML’s state general secretary. “Unlike them, we are secular, democratic and inclusive. There will not be even an understanding with them this time.”

But the Jamaat-e-Islami (JeI), an Islamist organisation that backs the WPI, insists that it has a cordial relationship with both the UDF and the LDF. “We try our best to be inclusive and have connected with both the fronts,” said M.K. Mohemmadali, the JeI’s state secretary. But he ruled out any electoral alliance in the polls.

The SDPI, too, plans to go it alone. “We will have candidates in 97 seats, and will have no political understanding with any front,” said Mustafa Komeri, the party’s state secretary. “The SDPI is putting forward an alternative to both the fronts and is reaching out to people of all religious and social strata.”

Observers, however, say both the SDPI and the WPI will eventually support the IUML. The LDF has been attacking the IUML, saying its leader P.K. Kunhalikutty would be de facto chief minister if the UDF comes to power. “If there were divisions within the IUML and the Muslim community over issues, they have all vanished, thanks to the CPI(M),” said N.P. Chekutty, author of Muslim League in Kerala Politics. “Even those who had grudges against Kunhalikutty and the IUML leadership have now rallied behind it.”

Despite its strengths, the party is aware that it will have to carefully flex its muscles within the UDF. “The IUML leadership knows that it will not be able to survive another five years out of power,” said Chekutty. “So it will not do anything that would upset the UDF’s chances.”

In 1959, a mass movement led by Christian clergy and upper-caste Hindus, called the liberation struggle, resulted in the dismissal of the first communist government in Kerala in 1959.

“Anti-communism had been the bedrock of Christian politics in the state, thanks to the aggressive rationalist posturing of then communist parties,” said Podippara. “The Christians, along with the upper-caste Nairs, saw the first communist government as an evil manifestation and did everything possible to overthrow it. The remnants of this thought process is still evident in Christian belts.”

In 1964, when P.T. Chacko was removed as home minister after he was embroiled in a scandal, the Congress in the state split. Fifteen of Chacko’s party colleagues, led by K.M. George and R. Balakrishna Pillai, floated the Kerala Congress as a Nair-Christian coalition. The party subsequently underwent multiple splits and mergers. Over decades, representation of other communities in the Kerala Congress waned, and its factions eventually came to be dominated by Syrian Catholics—the most powerful group among Christians.

“The Kerala Congress represents farmers—big and small,” said Joseph M. Puthussery, a leader of a prominent Kerala Congress faction. “It is their interest that matters to us. It is just a coincidence that they belong mostly to a minority community.”

The Kerala Congress has split so many times that its tallest leader, former minister K.M. Mani, once remarked: “The party grows as it splits, and splits as it grows.” Today, as many as eight Kerala Congress factions are part of the UDF and the LDF.

Then there is P.C. Thomas, son of the former minister Chacko, who is part of the BJP-led National Democratic Alliance. “The Kerala Congress was formed as a regional party with a national vision,” said Thomas. “Had we been together, the party would have been more relevant. Still, because of the fact that we represent a minority community, all fronts are keen to have us.”

The support of Christians, who are dominant in central Kerala, has stood the Kerala Congress in good stead. “There has rarely been a government in Kerala where a Kerala Congress faction was not in power,” said Podippara. “Proximity to power has been the sole ideology of Kerala Congress groups.”

The UDF, however, has long been attracting most of the “upper-caste” Christian votes. But that long-standing alliance took a hit last year when the Kerala Congress (M) joined hands with the LDF.

“It is a game-changer in Kerala politics,” said writer Paul Zachariah. The Catholics, he said, had been the staunchest anti-communists among Christians. But with KC(M) leader Jose K. Mani joining the LDF and the church covertly supporting the move, he sees a “a dramatic change”.

That change is likely to benefit the LDF, which has long been wooing other prominent Christian groups like the Marthomites, the Jacobites and the Orthodox church. With the Catholics, too, shedding their animosity, the LDF is eyeing many traditional UDF bastions.

Rising anti-Muslim sentiments among Christians is also helping the ruling coalition. A spate of controversies—Turkey’s decision to reclassify Hagia Sophia as a mosque (which the IUML supported), the killing of Armenian Christians, allegations of love jihad—has turned many Christians against the IUML. They have also been antagonised by the IUML’s opposition to the state government’s decision last year to implement reservation for the poor among the upper castes. “The IUML blundered by antagonising Christians, which in effect hampers the UDF’s prospects,” said Chekutty.

The Christian Association and Alliance for Social Action (CASA), a community organisation that is not affiliated to any church, recently called on Christians to support the BJP in the assembly polls. “We formed CASA because both the fronts have been ignoring the Christian community,” said Kevin Peter, CASA’s state president. “The Congress have been treating Christians like fixed bank deposits since 1950. The LDF did not give us due importance, thinking we are Congress sympathisers. Only the BJP has raised issues that are dear to our hearts.”

CASA has around 10,000 members and its chief concern seems to be the alleged cases of love jihad. “If the BJP grows in this state, it is only because of the policies of Muslim appeasement of both the fronts,” said Peter. “The Congress is completely under the control of the IUML, while the LDF tries to protect the interests of Muslims more than Christians. Only the BJP has dared to promise a bill against love jihad.”

According to Podippara, even a minor shift in Christian votes will hurt the UDF badly. Having realised it, the UDF is now firefighting. “Congress and IUML leaders have struck some smart deals in the past two weeks,” said Podippara. “The results have started showing.”

Chekkutty explained why the UDF cannot afford to lose Muslim and Christian votes. “These two communities, along with upper-caste Hindus, have been its pillars,” he said. “Nair votes have more or less shifted to the BJP now. Lose the minority votes, and the UDF would wither away.”