BJP is finding acceptance in TN, but it is unlikely to translate into votes 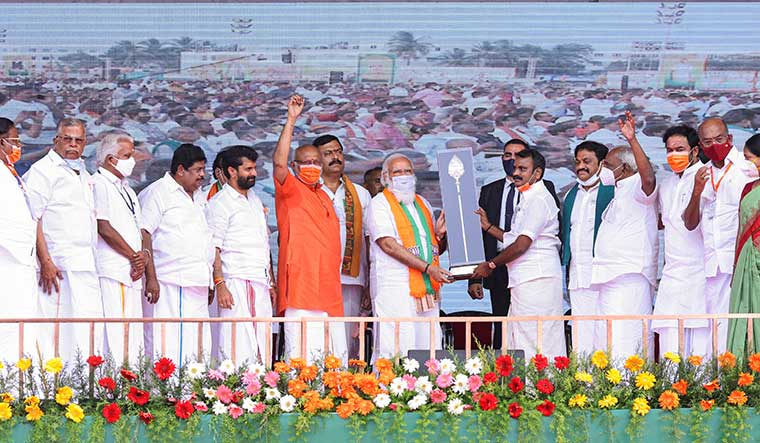 ON FEBRUARY 25, Prime Minister Narendra Modi was in Coimbatore, Tamil Nadu, to launch the BJP’s assembly poll campaign. He began his address with “Vetrivel, veeravel” (victorious spear, courageous spear), a war cry dedicated to Lord Muruga. The BJP hopes that like the Jai Shri Ram slogan is used in West Bengal, the chant could help increase the party’s vote share in Tamil Nadu.

Devotion to Muruga has been the cornerstone of the BJP’s politics in Tamil Nadu since last July, when a YouTube channel called Karuppar Koottam released a video in which the anchor was shown making disparaging comments about “Kanda Shashti Kavasam”, a song in praise of Muruga. The BJP found it to be an opportunity to step up its ideological battle in the Dravidian land, which is deeply rooted in Periyar E.V. Ramasamy’s anti-caste, anti-Brahmin movement.

Leaders of the BJP and its affiliates soon started asking Hindus to unite in order to defeat the forces that are inimical to their faith. “In Tamil Nadu, land and language have always been inseparable entities in the life of the common man. It has made the BJP’s journey very difficult here,” said political analyst R. Mani. “So, the party wanted to get closer to the people, and it found a chance in the Kanda Shashti Kavasam issue.”

The BJP has been trying to work its way into Tamil Nadu’s electoral politics since the death of former chief minister J. Jayalalithaa in 2016. It tactfully used the rift within the All India Anna Dravida Munnetra Kazhagam after Jayalalithaa’s confidante V.K. Sasikala, who succeeded her as the general secretary of the party, went to prison on corruption charges. The BJP has found it easy to deal with Chief Minister Edappadi K. Palaniswami and Deputy Chief Minister O. Panneerselvam.

“When Jayalalithaa was alive, Union Minister Piyush Goel once had to wait at the gates of her Poes Garden residence for an appointment,” said Mani. “But after her death, AIADMK leaders like Palaniswami and Panneerselvam have been making regular visits to Delhi to make sure that their government did not fall. This has emboldened the BJP to indulge in all sorts of political manoeuvring.” 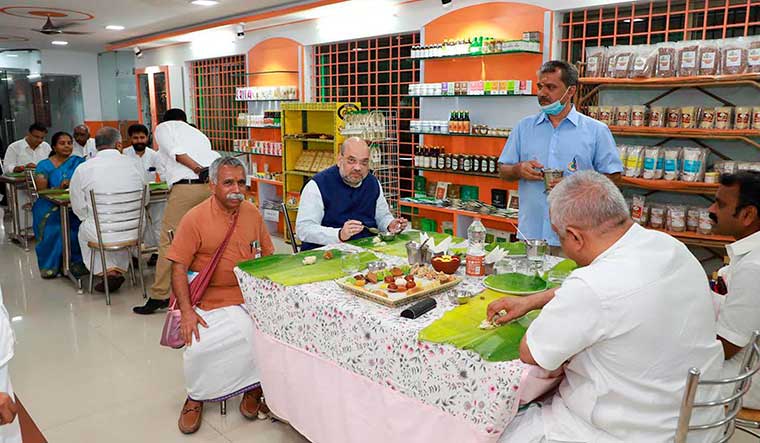 “The allegation by our opponents that the BJP is riding on caste sentiments is not correct,” said BJP spokesperson Narayanan Thirupathy. “We are only doing things the people want. They want a political party which supports them and their state. So they are moving towards the BJP.” He said the BJP had been quite active on the ground in the past four years. Vanathi Srinivasan, national president of the women’s wing of the BJP, said the Tamils started supporting Modi as they were benefiting from Central schemes. “They feel that we are their real representatives,” she said.

After the 2019 debacle, the BJP launched an aggressive enrolment campaign, increasing the number of party members in Tamil Nadu from 10 lakh to 45 lakh. “We now have booth committees in full strength for all the 65,000 polling booths. We have established our party infrastructure in the last three years,” said Thirupathy.

More than the membership drive, what has caught the attention of the people is the aggressive campaign by the BJP and its affiliates on a range of sensitive issues over the past few years. For instance, the BJP was vehement in its opposition to author Perumal Murugan’s book Mathorupagan (published in English as One Part Woman). After facing multiple death threats, the author said he would quit writing. The party forced lyricist Vairamuthu to apologise for his controversial remarks about Andal (a goddess who is believed to have prayed to beget Lord Krishna as her husband). The BJP and other hindutva groups targeted orator Nellai Kannan for his provocative remarks on Modi and Union Home Minister Amit Shah at a campaign against the Citizenship (Amendment) Act.

There have also been allegations that some members of the Seva Bharathi—a front organisation of the RSS—were part of the Friends of Police, a community policing group which was disbanded for its alleged role in the Sathankulam custodial death case. Some of them were said to have targeted those who were suspected to be involved in anti-Hindu activities. The BJP also tried to appropriate the legacy of legendary poet Thiruvalluvar by depicting him as wearing a saffron robe. Filmmaker Pa. Ranjith was targeted after he said the reign of Raja Raja Chola I was a dark period for dalits.

What, however, gave the BJP the maximum mileage was the controversy over the Kanda Shashti Kavasam, which resulted in the arrest of Karuppar Koottam’s founder Surendran Natarajan and three of his associates and the removal of over 500 videos from their YouTube channel. “I have filed over 500 police complaints. One complaint for each video,” said BJP spokesperson Aswathaman. “We ensured that every video which was anti-Hindu was removed from the Karuppar Koottam YouTube channel.”

The BJP continued its campaign against the song even after the police booked Natarajan and his associates under the Goonda Act. (Charges under the Act were later quashed by the Madras High Court.) The BJP organised a door-to-door campaign over the issue and blamed the opposition Dravida Munnetra Kazhagam as anti-Hindu for its stand on the issue.

The next major campaign by the BJP was the Vel Yatra, alleging that the Dravidian movement was not respectful towards Muruga. A huge spear has come up at the entrance of Kamalalayam, the BJP headquarters in Tamil Nadu, and party president L. Murugan is often spotted donning saffron and green clothes, which devotees believe to be Muruga’s favourite colours. But the Palaniswami government denied permission to conduct the yatra, citing Covid-19 concerns and a court order. Palaniswami also declared Thaipusam, the biggest festival celebrated by Tamils in the name of Muruga, a public holiday. Although the yatra was a flop, the BJP believes that it served its purpose. “The yatra was a turning point in Tamil Nadu politics. It helped the people of Tamil Nadu identify anti-Hindu forces,” said L. Murugan.

With the BJP slowly gaining recognition across Tamil Nadu, the party is inducting famous faces like actors Khushbu and Gautami and former DMK leader V.P. Duraisamy. But the BJP’s plans to create a major impact in the upcoming assembly elections suffered a setback after superstar Rajinikanth decided against entering active politics, citing health concerns. “Rajini’s withdrawal was the biggest setback for the BJP. The BJP camp has been overtaken by an inexplicable sense of gloom as the actor dropped his plans,” said Ramu Manivannan, head of the department of politics and public administration at the University of Madras.

But the BJP has not given up. It has further strengthened its alliance with the AIADMK. Although the AIADMK is the senior partner in the alliance, Shah has been playing a key role in setting its agenda and also in seat sharing. On February 28, he held a three-hour-long meeting with Palaniswami and Panneerselvam in which the BJP’s national general secretary (organisation) B.L. Santhosh also participated.

With its rallies, yatras and aggressive campaigns, the BJP appears successful in disseminating its message among Tamil voters. “It might not convert into too many seats in the upcoming elections,” said Mani. “But in the coming years, the acceptance for the BJP is likely to grow.”