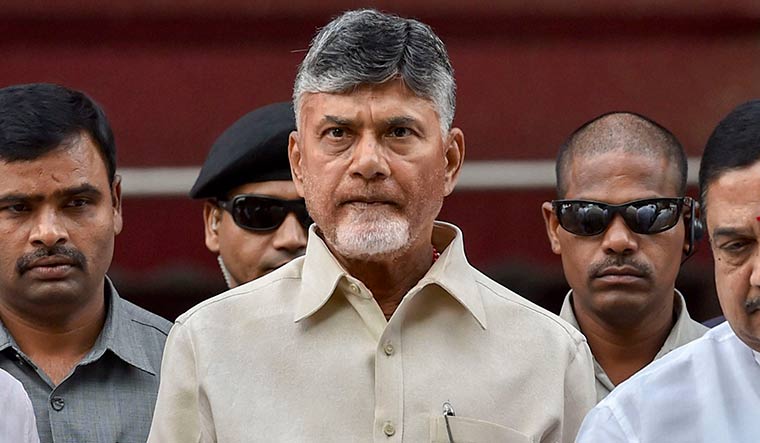 CHANGE HAS COME for the first time in three decades for the villagers of ON Kothuru in Chittoor district of Andhra Pradesh. Ever since the formation of the Telugu Desam Party (TDP) in 1982, the sarpanch of the village had always been from the party. The village falls in Kuppam assembly constituency, represented by former chief minister and TDP national president N. Chandrababu Naidu since 1989.

But the village panchayat elections held in February saw a candidate backed by the ruling YSR Congress Party (YSRCP) becoming the sarpanch. The overall results in Kuppam dealt an even bigger blow to the TDP; the YSRCP won 74 village panchayats. “We are confident of defeating Naidu in the next assembly elections,” said K.R.J. Bharat, YSRCP’s Kuppam constituency in-charge.

The TDP camp said the YSRCP won through undemocratic means. “We still believe that all those 74 village panchayats belong to us,” said G. Srinivasulu, a TDP legislative council member who hails from Kuppam.

After the unexpected loss, Naidu embarked upon a two-day tour to Kuppam, interacting with local leaders even well past midnight. It was conveyed to him that he needed to be more visible in the constituency to retain it. Some of the TDP workers even demanded bringing in popular actor N.T. Rama Rao Junior, grandson of TDP founder and former chief minister N.T. Rama Rao, to revitalise the party.

Naidu, who can be considered as one of the shrewdest political minds of the country, was hit by consecutive electoral defeats. In 2018, the TDP was wiped out in the Telangana assembly polls after an unsuccessful alliance with the Congress. A year later, it lost to the YSRCP in a landslide in Andhra Pradesh—both in the assembly and the Lok Sabha elections. In the village panchayat elections, the YSRCP dominated all 13 districts of the state. “Naidu seems to be alone in his fight,” said political analyst Telakapalli Ravi. “There is also no external support for him. The BJP is in no mood to accommodate him. Other parties opposing the BJP, too, seem to be not interested in supporting him.”

Naidu continues to remain the supreme leader of the TDP, but there is a general impression that the party structure has weakened. At least two spokespersons and four Rajya Sabha MPs have left the TDP for the BJP in the past year and a half. Three MLAs of the TDP now openly support the YSRCP, while three legislative council members have quit and have joined the YSRCP. The TDP is also hamstrung by the fact that it lacks credible second-rung leadership. And, Naidu’s image as a decisive and shrewd leader has taken a hit.

“In a recent internal party meeting, party workers, for the first time, openly expressed unhappiness about his strategies. They blamed the gram panchayat losses on Naidu and the people close to him,”said a senior TDP leader. “You can see that most of our former ministers and top leaders have gone silent. It is a fact that there is discontentment and uncertainty within the party.”

Naidu’s present situation is a far cry from his glorious past when he was counted among the most influential national politicians. He was just 45 when he dislodged his father-in-law, N.T.R., and took over as chief minister in 1995. As the convener of the United Front, he played a key role in making H.D. Deve Gowda and I.K. Gujral prime ministers. Later, he switched over to the National Democratic Alliance, where he remained a close ally of prime minister Atal Bihari Vajpayee and was instrumental in naming A.P.J. Abdul Kalam as president.

Naidu’s biggest success came in rebranding Hyderabad as India’s information technology hub. But he failed to replicate it in the case of Amaravati. The YSRCP government diluted the Amaravati capital project and instead proposed three capitals for Andhra Pradesh. The Naidu-led opposition failed to turn the agitation for reinstating Amaravati as capital into a mass movement. In the village panchayat elections, many of the villages which fall under the Amaravati capital region voted overwhelmingly for YSRCP candidates.

Parakala Prabhakar, former communications advisor to the Andhra Pradesh government who had worked closely with Naidu in the last term, said Naidu and other opposition leaders failed to take the protests beyond the 29 villages in Amaravati. “They could not make it a statewide issue,” said Prabhakar. “It is a disappointing performance by Chandrababu and the TDP which can demoralise the party cadre. He needs to reposition himself in his party.”

As questions are being raised about Naidu’s future, even TDP insiders feel that the road ahead will be tough for him. “He did not do much to recoup the party and is present only on media,” said Ravi. “Media agenda cannot be party agenda, and Naidu needs to be more realistic.”