Sex and the CD 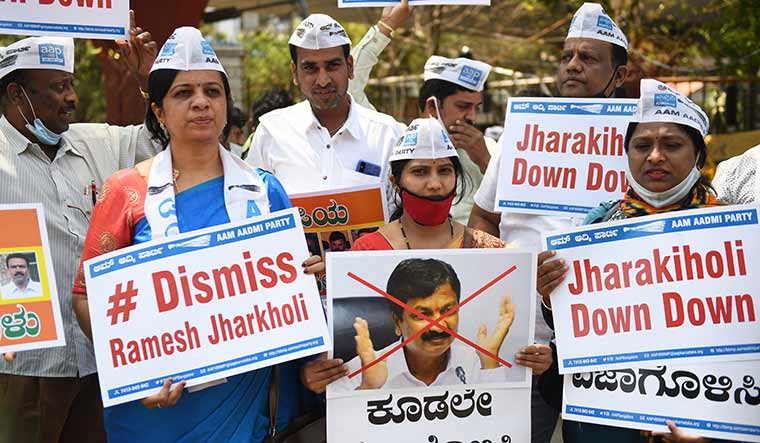 A SLEAZY CD, allegedly featuring Karnataka Water Resources Minister Ramesh Jarkiholi and an unidentified woman, has caused a political storm in the state.

A series of video clips and WhatsApp video call recordings went viral on March 2, and protests demanding the minister’s ouster erupted across the state. The Gokak MLA, however, pleaded innocence, saying it was a “political conspiracy”and that the videos were fake. The following day, though, he resigned citing moral grounds, reportedly following directions from the BJP’s central leadership. This was much to the relief of Chief Minister B.S. Yediyurappa, who had reportedly held a closed-door meeting with BJP MLA Balachandra Jarkiholi, asking him to convince his elder brother to step down.

The scandal comes at a bad time for the ruling BJP. The party is preparing for assembly elections in four states and one Union territory (three in south India) and a Lok Sabha byelection to the Belagavi seat, which fell vacant after the death of Union Minister Suresh Angadi. It is also battling a leadership crisis, corruption charges against Yediyurappa’s kin and ire against snail-paced development.

The chief minister himself has reason to feel flummoxed as Jarkiholi was responsible for installing the current BJP government. He was one of the 17 rebels from the Congress and the Janata Dal (Secular), whose mass resignation in July 2019 toppled the JD(S)-Congress coalition government. Jarkiholi, who was re-elected on a BJP ticket, was inducted into the Yediyurappa cabinet “as promised”.

“I urge the chief minister to initiate a thorough probe,”said Jarkiholi. “This is a serious allegation. I have been an elected MLA for the past 21 years and no such allegations were made against me. If the allegations are proven, I will even resign as MLA. Our family is a reputed one.”

Balachandra insisted that his brother had been “framed”and demanded a CBI inquiry into the case. “The woman has not complained and some third party is making the allegations,”he said. “We will deal with it legally. We will file a defamation suit for Rs100 crore against the person who is posting these baseless videos.”

Back home in Belagavi, where the Jarkiholi family reigns supreme, protests marked the day. JD(S) leader Ashok Pujari mocked the minister’s “misplaced priorities”in life and said the constituency and the state needed a “responsible”and “morally strong”leader.

While some BJP leaders tried to defend Jarkiholi, the alleged contents of the CD—almost two hours of the minister’s “private moments”at the government-run Karnataka Bhavan in Delhi—have shocked the ruling party and the opposition alike.

Moreover, Dinesh Kallahalli, a social activist, lodged a complaint at the Cubbon Park police station on March 2, accusing the minister of sexual exploitation and intimidation. “The woman’s family approached me for help,”he said. “I am unable to reveal the identity of the victim as the family is still hesitant to file a complaint. But I decided to lodge a complaint as it is a serious matter involving a minister.”

He said the alleged victim was from north Karnataka. “She had approached the minister for making a documentary on the state’s dams,”he said. “But the minister promised her a government job in [Karnataka Power Transmission Corporation Limited] and sexually exploited her. The family now fears for their lives as the minister is threatening them.”

Said Deputy Commissioner of Police (Bengaluru Central) M.N. Anucheth: “We will file an FIR only after taking the aggrieved woman’s statement.”

While leader of the opposition Siddaramaiah sought an FIR in the case, JD(S) state president H.D. Kumaraswamy taunted the rebels who quit his party, saying, “They pulled down my coalition government saying it was rakshasi sarkara (ruthless government); this is the Ram rajya they so desired.”

Congress spokesperson and advocate Brijesh Kalappa, during a news conference, said, “The Vidhana Soudha building has the words ‘Government work is God’s work’, carved on it. But the minister’s behaviour has made the people of Karnataka hang their heads in shame. He has not only abused his authority by sexually exploiting a woman by promising her a job, but has also misused government premises. Besides the sexual act, the videos have objectionable conversations. Jarkiholi is heard saying that the incumbent chief minister is corrupt and he also tells the woman that Pralhad Joshi will be the next chief minister. Now, why is a cabinet minister not quitting in protest if he knows the chief minister to be corrupt?”

Even as the legal fraternity is debating whether the case could be one of consensual sex between two adults, which is not a legal offence, some BJP leaders have questioned the veracity of the video clip. “The videos could be fake as Jarkiholi claims,”said Deputy Chief Minister Dr Ashwath Narayan. “These days, people are becoming victims of honey trapping and political conspiracies.”

Karnataka politicians, who are no strangers to sex scandals, are biding their time, waiting for the storm to pass. In such cases, an investigation followed by a clean chit has been the norm rather than the exception.

IN DECEMBER 2016, State Excise Minister H.Y. Meti (71), resigned after news broke of a CD where he was seen in a compromising position with a woman (Vijayalakshmi). The minister was accused of seeking sexual favours in exchange for a transfer.

ON 24 MAY 2017, the state Criminal Investigation Department gave the Congress leader a “clean chit”and said the video was doctored. It said the woman was not a “credible”witness as she had changed her statement frequently. She attempted suicide in August 2017.

IN MARCH 2013, just before the assembly polls, BJP MLA Raghupathi Bhat backed out of the election in Udupi after a CD, allegedly featuring him and a sex worker, came to light.

The government sacked all three; later, a house committee declared them “innocent”. Savadi is currently one of the three deputy chief ministers; Patil is also a minister.

IN NOVEMBER 2009, Hartal Halappa, then food and civil supplies minister, was accused of raping his friend’s wife.

He was jailed, but got bail on health grounds. The additional district and sessions court in Shivamogga acquitted him in 2017, citing “lack of evidence”.

IN 2007, a nurse claimed that BJP MLA M.P. Renukacharya was in an extramarital affair with her. She filed a police complaint and shared their intimate photographs in public. The matter was settled out of court in 2010 after Renukacharya became excise minister.