If the BJP can stay united, it can at least become a kingmaker 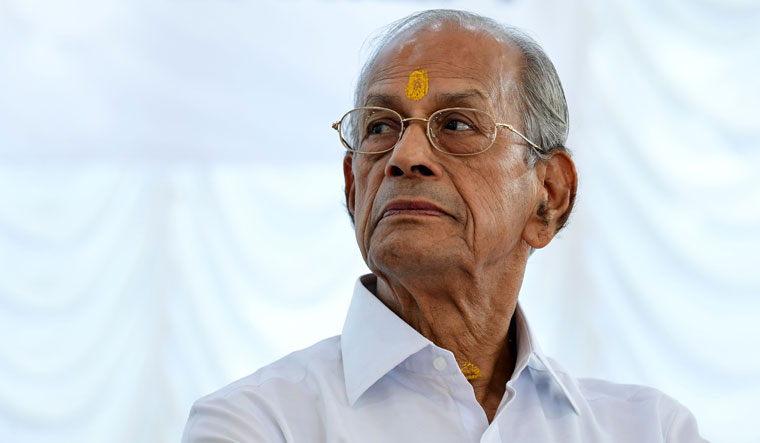 E. Sreedharan could be the busiest 88-year-old in the country. On February 19, the “metro man” took many people by surprise by announcing that he had decided to join the BJP. Since then, his transformation from a technocrat to a politician has been quick and stark.

Sreedharan has been both blunt and sharp while attacking political opponents. He has also candidly expressed his aspiration to become the BJP’s chief minister candidate in the assembly elections in Kerala, due in May. Will he be able to change politics the way he changed public transport facilities across the country? In an exclusive interview, Sreedharan spoke to THE WEEK about his mission in politics. Excerpts:

Q| In the past few days, you have transformed yourself from a technocrat to a true-blue politician. Was this change easy for you?

A| I have entered politics, but that doesn’t mean I am a politician. I will continue to be a technocrat. I won’t play politics, but will work as a statesman to bring progress and prosperity to the state.

Q| You had earlier refused to enter politics despite receiving many offers. What prompted you to take the plunge now?

A| This is not true; there was no offer earlier from any political party. Now, having completed all my professional responsibilities, the last being the reconstruction of Palarivattom flyover [in Kochi], I felt my experience and talents should be utilised for the state. Therefore, I accepted the BJP’s invitation.

Q| Why the BJP? And not the Congress or the left parties, which are more powerful in Kerala?

A| The Left Democratic Front and the [Congress-led] United Democratic Front have been ruling the state for a number of years. These two fronts have not been able to bring any tangible progress, mainly because of corruption, scandals and [the tendency to] work for their own interests rather than of the state. Therefore, I decided to join the BJP, which is untouched by scandals or corruption. The party is pledged to safeguard the integrity of the country and ensure economic growth.

Q| How will your entry help the BJP in the state?

A| My clean record and reputation for completing projects on time and within budget, and the work culture and dharmic values I displayed to the nation, will certainly bring ready and wholesome acceptance of all well-wishers of Kerala to the BJP.

Q| The BJP has been trying to win Kerala for a long time without much success. What could be the factors that work against the BJP?

A| The BJP in Kerala lacks a leader of national eminence. There are some tensions at the top level of the state unit. The failure and misdeeds of the earlier ruling parties would now certainly unite the BJP.

Q| Beef and love jihad are two issues that polarise Kerala society. What is your take on that?

Q| Your decision to enter politics has elicited varied reactions—from excitement and shock to derision. Do these reactions affect you, or have you already become thick-skinned like other politicians?

A| Being an ardent student of the Gita, I will accept bouquets and brickbats with equal ease and indifference.

Q| Shashi Tharoor has said that your political entry will have only “a minimal impact” on the assembly polls. Former chief minister Oommen Chandy said your decision was “unfortunate”. CPI(M)’s acting state secretary A. Vijayaraghavan said you lacked an understanding of the country’s history. Do these reactions mean that rival parties are worried?

A| These are all personal views. They are certainly worried about the great advantage the BJP will have. Such reactions are natural.

Q| You have interacted with political leaders at the national and state levels. Has anyone inspired you?

A| Quite a lot of them. For example, Madhavrao Scindia and Sheila Dikshit, both of whom belonged to the Congress; former prime minister Atal Bihari Vajpayee, who had the humility to personally purchase a travel ticket for his first journey on the Delhi Metro; and now, Prime Minister Narendra Modi, who has raised the image of our country before the whole world through his various reforms and decisive steps.

Q| Many bureaucrats and technocrats have entered politics in recent years. What impact will this have?

A| This is a good trend. Bureaucrats and technocrats are well-trained, competent and able administrators. They will not be guided by political fanaticism, but will work with integrity for the progress of the country.

Q| Who has the best chance of winning the assembly elections in Kerala?

A| If the BJP can close its ranks and [highlight its promises]—to bring a large number of industrial projects to the state, provide jobs to people, and save the state from the debt trap it is now facing—then I am sure there will be a landslide migration of voters to the BJP. It can come to power, or at least become a kingmaker.