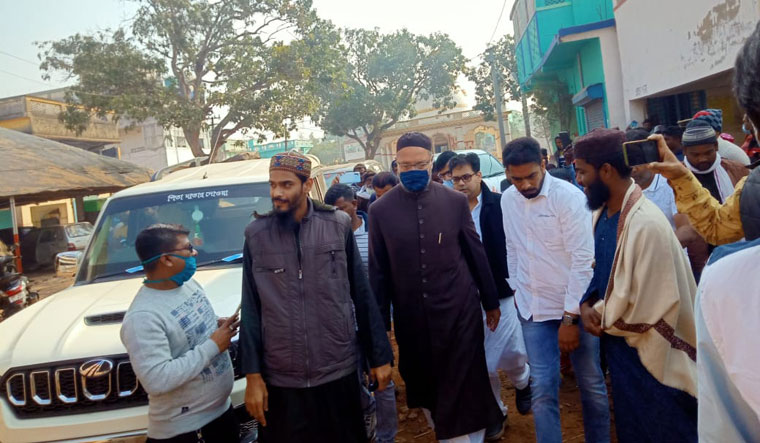 After the All India Majlis-e-Ittehadul Muslimeen impressed with five seats in the Bihar assembly polls, party president Asaduddin Owaisi said: “I will go from village to village and [highlight] the condition of Muslims in Bengal.” He may still do that, but he will be playing second fiddle to a local party. On January 3, Owaisi quietly visited Furfura Sharif—a village in Hooghly district, which is a pilgrimage site for Bengali Sunni Muslims—and met Abbas Siddiqui, a religious leader from the village who is on the warpath against West Bengal Chief Minister Mamata Banerjee.

During the meeting, Owaisi and Siddiqui inked an alliance, though the latter’s newly formed political party is yet to be recognised by the Election Commission of India. Said Owaisi: “My party will contest the election under the leadership of Abbas bhai.” The MP added that the AIMIM would abide by Siddiqui’s decisions in all matters pertaining to the polls, including alliances. Siddiqui is much like Owaisi in his scathing attacks on the BJP; the only difference is that while Owaisi has been opposing the Congress, too, Siddiqui is lenient towards the Congress and the left.

Months ago, both the AIMIM and Siddiqui had reached out to the Trinamool Congress to discuss a potential electoral understanding. But, Banerjee was not willing to share seats with either party. She even spoke out against Owaisi, without naming him. “Some radicals from Hyderabad are trying to create trouble in Bengal; please be alert,” she said.

As a result, Owaisi was expected to come out swinging ahead of the assembly polls in West Bengal. But, the AIMIM lacks organisational strength and connections in the state. “As a member of the All India Muslim Personal Law Board, he (Owaisi) gets along with Urdu speaking Sunni leaders; [therefore] he has knowledge about Bihar,” said an AIMIM member, who requested anonymity. “But, he lacks knowledge about Bengal and does not know many Bengali Muslim leaders.”

This was evident when Owaisi said, after the Bihar elections, that he would come to the fortress of Congress leader Adhir Ranjan Chowdhury in Murshidabad, a Muslim-dominated district. Chowdhury has little political control in Murshidabad today and it has become a Trinamool bastion. Owaisi was also seemingly blindsided by a dozen of the AIMIM’s Bengal leaders defecting to the Trinamool. That included senior leader Sheikh Anwar Hussain Pasha, who said that he joined the Trinamool to ensure that Muslim votes did not get fragmented as that would help the BJP. “This is the most crucial time for Bengal since independence,” said Pasha.

Owaisi realised that he needed a local ally. Siddiqui has emerged as a strong leader, banking on the disillusionment among a section of Muslims. None of his followers have been lured by the Trinamool. In fact, they were allegedly attacked, charged with “false cases” and even warned of “social isolation”. Siddiqui told THE WEEK: “Despite such attacks and torture, my men stood firm and they will do that in the future, too.” He ruled out any alliance with the Trinamool. “I wanted an alliance,” he said. “But, Mamata Banerjee rejected that, perhaps thinking that we Muslims have no right to float our own political party. My party has not only Muslims but also backward classes and adivasis.” However, he is open to joining forces with the Congress and the left. “I am interested in them because they have not attacked my party men,” he said.

Senior Congress leader and Rajya Sabha MP Pradip Bhattacharya said that his party would not support the alliance between the AIMIM and Siddiqui. “The Congress thinks that the AIMIM’s agenda is communal,” he said. “Also, it divides the anti-BJP votes.” He said that if the alliance dents the Trinamool’s Muslim vote bank, the ruling party will be in trouble. He added that he was sure the left would not ally with Siddiqui and the AIMIM.

Despite Owaisi being fully committed to the alliance, it has not gone down well with some members of the AIMIM. Its Bengal president Syed Zameerul Hasan said that Owaisi had not taken into account the sacrifices made by leaders like him. “I am a businessman,” he said. “I spent from my own pocket to fund the party’s activities. I was arrested on false charges and lost lakhs of rupees. My sons and other party men were arrested, too. I don’t know how Owaisi saab could be so ill advised.”

Siddiqui is affiliated to a small sect of Islam (peerage of Furfura Sharif) which has followers in only three districts of Bengal. Hasan said he could not accept directions from Siddiqui as he was not a follower of the sect. If disgruntled leaders like Hasan leave the AIMIM, the obvious destination would be the Trinamool. Siddiqui said he would not propagate the ideas of his sect among others and reiterated that his party included non-Muslims, too. “If the National Register of Citizens and the Citizenship (Amendment) Act are implemented in Bengal, they would not care which sect the Muslims belong to,” he said. “Our brothers should understand that.” He added that an estimated six crore people would be affected if the NRC was implemented in Bengal and that they would mostly be Muslims and lower caste Hindus.

Trinamool leaders feel that the involvement of the AIMIM and the Furfura Sharif sect in the elections would not alter the scenario. “Muslims will vote for the TMC as they have tasted us,” said Firhad Hakim, Trinamool leader and cabinet minister. “We have addressed all the issues of minorities. Why would there be a need for another party?” Siddiqui has launched a massive campaign in rural Bengal. The AIMIM will get involved in the coming months and also help financially. If Muslims in West Bengal respond to Siddiqui and Owaisi, Banerjee must worry.