Bhopal’s Upper Lake could vanish thanks to poor management 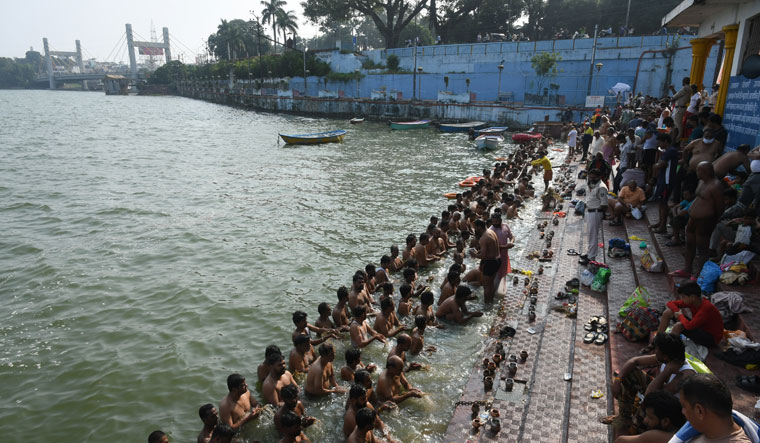 Faith bank: people take a dip in the upper lake for a religious ritual | Mujeeb Faruqui

Poet Inayatullah Khan ‘Naadaan’ described Bhopal’s Upper Lake thus in 1785. The lake has found reference in other literary works, too, like in poet Basit Bhopali’s 1950s couplet, where he wonders, “Talaab ka paani hai ki chandni sayyal (Is it the lake’s water or liquid moonlight)….”

It is not just shayars (poets) of yore, but also today’s young who cannot stop gushing about the lake. Ananya Choudhary, 12, is a regular visitor to the lake. “This is such a beautiful lake and so many people get drinking water from it, too,” she says. “I want it to remain safe and beautiful so that future generations can also see the lake and benefit from it.”

With a catchment area of 361sqkm and spanning Bhopal and Sehore districts, the Upper Lake or Bada Talaab is the capital’s lifeline. It provides drinking water to one-third of the city’s population. Together with the Lower Lake (Chhota Talaab), it is a designated wetland (Bhoj Wetland) and a Ramsar site. The lake got the international tag owing to its biodiversity and for being a habitat of the endangered sarus crane.

As per popular lore, the lake was commissioned by Raja Bhoj in the first half of the 11th century. But historian Syed Ashfaq Ali, in his Bhopal: Past and Present (1969), attributes its construction to Kalyan Singh, the king’s minister. The Imperial Gazetteer of Central India (1908), too, states the same, but credits the construction of a bigger lake—Tal Lake near Bhojpur—to the monarch, who reportedly filled it to ward off a curse. But a report on Malwa and adjoining districts by British administrator Sir John Malcolm, who was made in-charge of central India in 1818, suggests that the now non-existent Tal Lake “might be of an earlier date”. Likewise, Shyam Munshi, in his 2017 book, Bhopal: Sirf Naksh-e-Qadam Reh Gaye, says that the Bhopal lake was built by Gond rulers, much before Raja Bhoj’s time, and that it was the Bhojpur lake that was commissioned by the king.

The current dispute surrounding the lake, however, has little to do with its past and everything with its future. According to various studies quoted in an unpublished draft report by the CEPT University in Ahmedabad, the lifespan of the lake could be anywhere between 21 years to 555 years. Based on the varying figures in the studies, the report—submitted to the state government in 2015—puts the average lifespan of the lake at 222 years. As writer Shams Ur Rehman Alavi says, “It is depressing to think that a lake that has survived for 10 centuries and gives so much to the residents of Bhopal could be facing a threat just because of bad management and planning in the last three to four decades.”

Experts say that the lake is shrinking, getting shallower and its water quality worsening owing to sedimentation, encroachment and inflow of untreated sewage from nearby settlements. For several years, there has been rampant illegal construction on the northern side of the lake. In July 2014, the central zone bench of the National Green Tribunal (NGT) directed the state to ban all construction within 300m of the full tank level (FTL) of the Upper Lake, but to no avail.

“What is more shocking is that in the name of development, even the Bhopal Municipal Corporation and other government agencies have encroached upon the lake,” says environment management expert Pradip Kumar Nandi, who was closely associated with the Bhoj Wetland Project on the Upper Lake. The state tourism department, for instance, constructed a boat club on the lake’s southern side and an entertainment park along its spill channel. This led to an increase in commercial activity. The Bhopal Municipal Corporation (BMC) leased out land near the boat club for restaurants and food joints and also installed the state’s largest musical fountain near the boat club, without assessment of their impact on the lake.

Recently, the BMC constructed a 2.5km-long walkway from Khanugaon to Karbala along with a wall on the edge of the lake, part of which was within the full tank level. Following protests, Chief Minister Shivraj Singh Chouhan visited the site and ordered the demolition of the wall. After a brief halt, the BMC went ahead with the construction and extended the wall to VIP road.

Moreover, the flow of untreated sewage water continued even after the implementation of the sewerage scheme in 23 wards under the Bhoj Wetland Project. All because the BMC did not connect the houses with the main line.

There is also concern that the BMC put up faulty FTL demarcation pillars in 2012-2013. Following heavy rains in July 2016, the water level in the lake rose to 1,662.20ft (less than the FTL of 1,666.80ft), but many pillars got submerged. This indicates faulty demarcation. The NGT, in July 2016, ordered the BMC to properly demarcate the FTL for defining the ‘no construction zone’ around the lake. But many pillars were again found submerged during the monsoon in 2019 and 2020.

What has irked environment experts and citizens the most is the draft Bhopal Development Plan 2031. The Bhopal Citizens’ Forum has challenged it in the High Court. The draft plan proposes to expand the planning area from 601.06sqkm (as in BDP 2005) to 1,016sqkm through inclusion of villages falling in the catchment area. The plan ignores various encroachments around the lake and rather proposes relaxation of rules for construction in the catchment area, say experts.

Also, a 45m-wide road is proposed over and across the Upper Lake on the southern side, which will destroy the thick vegetation around the lake. Objection has been raised against the draft plan misrepresenting an area on the banks of the lake—currently being used illegally as a “marriage garden”, along the Bhopal-Indore Road—as a residential area, and allowing “permissible activities” on the 24m-wide road. The forum has called this a clear attempt to regularise the marriage garden “at the cost of life and ecology of the lake”.

IPS officer Arun Gurtoo, who filed the PIL on behalf of the forum, says that Bhopal’s unique climate, temperature balance, tourism attraction and even its significant drinking water needs are closely linked to the Upper Lake. “Unfortunately, people have not realised its importance,” says Gurtoo, who retired as director general of the state’s Lokayukta police establishment. “More unfortunately, the people in powerful positions are least bothered.”

A member of the State Wetland Authority, Abhilash Khandekar is worried about the threats being posed to the lake by government agencies. “I appeal to the chief minister to save the lake as without it, Bhopal’s identity will be under threat,” he says.

Nandi, who is director general of the National Centre for Human Settlements and Environment, an NGO, has a few suggestions to save the lake, starting with imposing restrictions on activities in the catchment area and preventing encroachment within the buffer zone and flow of untreated sewage water into the lake. Also, regular de-silting and de-weeding should be done, he says. Historian Rizwanuddin Ansari, citing a project on a manmade lake in Belgium, suggests creating a 50ft-wide green belt or park around the lake, so that it works as a ‘green barrier’ against encroachments.