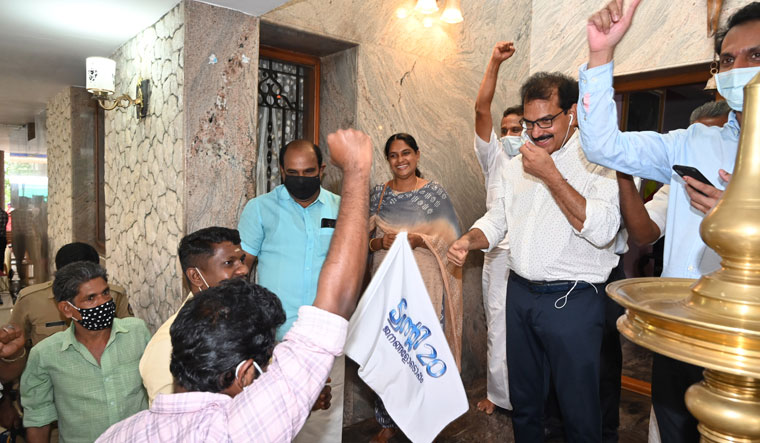 Matta rice Rs11.60/kg; sugar Rs9.60/kg; milk Rs5/l; onion Rs5/kg; shallots Rs15/kg; coconut oil Rs44/l. It is not the price list at a grocery store; it is the election brochure of the Twenty 20, a party which won four panchayats in the recent civic polls in Kerala. The brochure also tells the story of how a corporate-sponsored outfit is capturing the imagination of highly politicised Malayalis.

The Twenty 20 was born in 2013 as the welfare arm of Kitex Garments, a prominent exporter. A year later it became a political party and promised to turn Kizhakkambalam panchayat, where the company has been based since 1968, into a world-class village by 2020. In the 2015 local body polls, it registered a landslide victory in the panchayat.

“Our decision to enter politics was accidental,” said Sabu M. Jacob, chief coordinator of the Twenty 20. “All we wanted was to ensure the welfare of the people around us, but the high-handed attitude of the then ruling party in our panchayat forced us to enter politics.” Jacob is the managing director of Kitex Garments, the world’s second largest infant wear producer and a major supplier to Walmart and Amazon. Kitex’s parent company, Anna Group, is one of the largest employers in the state.

The Twenty 20 did turn Kizhakkambalam into a model village with squeaky clean roads, housing projects for the poor and a food security market. The panchayat was also turned into one with surplus funds, a rarity in the country. “Our model panchayat could be replicated by anybody provided they have the vision, planning and disciplined execution, and a will to root out corruption,” said Jacob.

The food security market, which can be accessed with a consumer card allotted by the Twenty 20, was the highlight of it all. Entirely sponsored by the corporate social responsibility fund of the company, the market offers huge discounts on essentials. “When others buy rice at Rs60 a kilo, we buy it for less than Rs10,” said Achamma Kora, a resident of Kizhakkambalam.

In the 2020 local body polls, Twenty 20 spread its wings to the neighbouring panchayats, winning three more of them. “My family voted for the first time for a party other than the Congress,” said Saramma Elias of Aikaranad panchayat, where the Twenty 20 swept the polls.

Now the party has big plans, with Jacob announcing its decision to contest in the upcoming assembly elections. “I am getting calls from all over the state. It is evident that the people of Kerala are fed up with the existing political parties and are eager for a change. We are ready to take up the challenge,” he said.

The political parties, obviously, are not happy.

“Jacob is using his money power to win votes and to cover up the violations of his company,” said Elias Karipra, Congress unit president in Kizhakkambalam. “They win only because they offer freebies.” He alleged that the Twenty 20 used the consumer card to trap the voters and threatened to withdraw it if they did not vote for the party. “Jacob rules Kizhakkambalam like a king. Nothing happens here against his wishes,” he said.

Jins T. Musthafa, secretary of the CPI(M) local committee, said Jacob was using the loopholes in the system to his advantage. “He is exploiting the poor people, and he makes clever use of the popular construct that all politicians are bad,” he said. “Kitex pays additional salary to the elected members of the panchayat. Will they be loyal to the people or to the company?”

Jacob denied that panchayat members were on his payroll. “Yes, we reimburse their expenses, as the honorarium of Rs 7,000 that they get from the government is not enough for the effort they put in,” he said.

Interestingly, political commentators are yet to figure out the Twenty 20 phenomenon. Activist C.R. Neelakandan said it was the failure of the traditional political parties that led to the growth of apolitical parties like Twenty 20. According to J. Prabhash, former head of the political science department at Kerala University, the victory of Twenty 20 is “political and apolitical at the same time”. “People’s decision not to vote for the Congress or the CPI(M) is certainly a political act,” he said. “But their decision to opt for a party which has no ideology or political position is certainly apolitical.”

Prabhash said the Twenty 20 would have to rethink its political positioning if it was planning to branch out to other parts of the state. “Ruling a panchayat without an ideology is fine, but if it is planning to expand in the given format, it will be exposing itself too much,” he said.

Jacob, however, asserts that the ideology of his party is “peace, happiness and security”. “Is there anyone who does not want development and happinesses?” he asked.