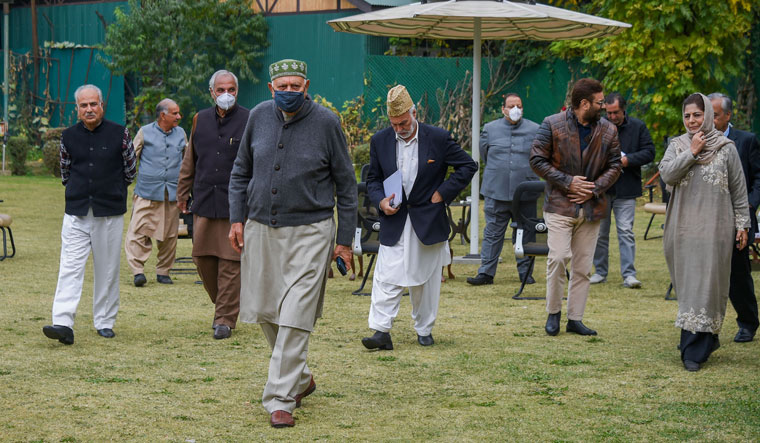 United they stand: Members of the Gupkar alliance after a meeting on October 24 | PTI

On October 15, more than a year after Article 370 was revoked, political parties in Jammu and Kashmir formed the People’s Alliance for Gupkar Declaration to fight for the restoration of the former state’s special status.

The alliance consists of most of the regional parties that signed the Gupkar Declaration at former chief minister Farooq Abdullah’s home in Srinagar on August 4, 2019. The resolution warned against any change to the status of Jammu and Kashmir, saying that any such move would be tantamount to aggression against the people. The state was cut up into two Union territories the following day.

Abdullah chaired the recent meeting of the signatories to the declaration at his residence on Gupkar Road in Srinagar. Among those present was Peoples Democratic Party president and former chief minister Mehbooba Mufti, who was released from her 14-month detention a day before.

He said that theirs was a constitutional battle. “We want the government of India to return to the people of the state the rights they had before August 5, 2019,” he asserted, adding that the political problems had to be resolved as quickly as possible through dialogue with all stakeholders. Notably, nobody from the Congress, which had signed the Gupkar declaration, was present at the October 15 meeting. The party’s Jammu and Kashmir president Ghulam Ahmad Mir skipped the meeting because of medical reasons.

On October 24, Abdullah and Mufti were appointed chairman and vice chairperson of the alliance. In her first interaction with the media after her 14-month detention, Mufti pointed to the Jammu and Kashmir flag on the table and said, “Until we get our own flag back, we will not raise any other flag. This flag forged our relationship with that flag (the tricolour). We will have to take back what Delhi snatched from us illegally, undemocratically and unconstitutionally.”

Abdullah added that the BJP was spreading false propaganda about the alliance being anti-national. “I want to tell them this is not true,” he said. “There is no doubt that it is anti-BJP, but it is not anti-national.”

Three days after the formation of the new alliance, the Enforcement Directorate had summoned Abdullah to its Srinagar office in connection with alleged misappropriation of funds in the Jammu and Kashmir Cricket Association during his tenure as its president. The officials questioned him again on his 84th birthday, two days later. On leaving the ED office, Abdullah said his resolve would not be crushed even if he was hanged.

Mufti also weighed in. “The ED’s sudden summons to Farooq sahib displays the extent of [the] GOI’s nervousness about mainstream parties in J&K fighting as one unit,” she tweeted. “[It] also reeks of political vendetta and won’t in the least blunt our collective resolve to fight for our rights.”

Political observers in the region said that the alliance would pose a challenge to the BJP, which has had complete control of all matters for more than a year now. And, as the parties are standing together, it would be hard for the BJP to strike a deal with any single party to help it continue the status quo.

For Mufti and People’s Conference president Sajad Lone, the alliance is an opportunity to redeem themselves in the eyes of their supporters, who were angered by their decision to ally with the BJP after the 2014 assembly elections.

The alliance would also marginalise the Jammu and Kashmir Apni Party, which former PDP minister Altaf Bukhari had founded with the BJP’s backing in early 2020. The Gupkar alliance is likely to get support in Jammu, especially in the Muslim-majority areas of Chenab valley and Pir Panjal, where people feel more threatened by the demographic change that could be brought on by the Centre’s new domicile rules.

The last time such an alliance happened was in 1987, when several parties with a separatist ideology came together to form the Muslim United Front (MUF). After suspicions that the 1987 state elections were rigged in favour of the National Conference, one of the MUF candidates, Muhammad Yusuf Shah, joined militancy in 1990. He went on to become Syed Salahuddin, the supreme commander of the Hizbul Mujahideen.

PDP spokesman Suhail Bukhari told THE WEEK that the formation of an alliance was the formalisation of the already announced intent of the Gupkar Declaration. “It was decided that if the special status is tinkered with, it would be considered as an act of aggression, and we would fight it unitedly,” he said.

NC leader Imran Nabi Dar told THE WEEK that the alliance would fight for the dignity of the people. “We will have more meetings to discuss the future course of action,” he said. “We are not asking for anything outside the Constitution. It is not a separatist demand.”

He added that the alliance had already got a lot of traction as everybody was concerned about their future within the changed setup. It is even believed that if the alliance contests the next assembly elections, it has a good chance of winning a majority.

However, that might not matter. On October 17, the Centre amended the Jammu and Kashmir Panchayati Raj Act, 1989, and the Jammu and Kashmir Panchayati Raj Rules, 1996, paving the way for the creation of a new tier of governance—district development councils (DDCs)—whose members will be directly elected by voters in the Union territory. The 20 districts will be divided into 14 territorial constituencies each, and each DDC will have a five-year term. Each DDC will have jurisdiction over the entire district, excluding portions under a municipality or municipal corporation. Alongside the elected members, MLAs and chairpersons of block development councils (BDCs) will also be members of the DDCs. However, only the elected members will have the right to elect or remove the DDC chairperson/vice-chairperson.

When Jammu and Kashmir was a state, the district planning and development boards (which the DDCs will replace) consisted of the chief minister, cabinet ministers and MLAs. They presided over the board meetings. In the DDCs, however, the powers of MLAs and MPs will be greatly diminished.

In the absence of an assembly since 2018, the DDCs would assume more power. And, even if the alliance goes on to win a majority in the next assembly elections, it could end up being a powerless entity.

With the Centre preparing to hold the DDC elections soon, it remains to be seen how the newly formed alliance tackles the issue.