Nitish will be CM, irrespective of the number of seats won by BJP and JD(U) 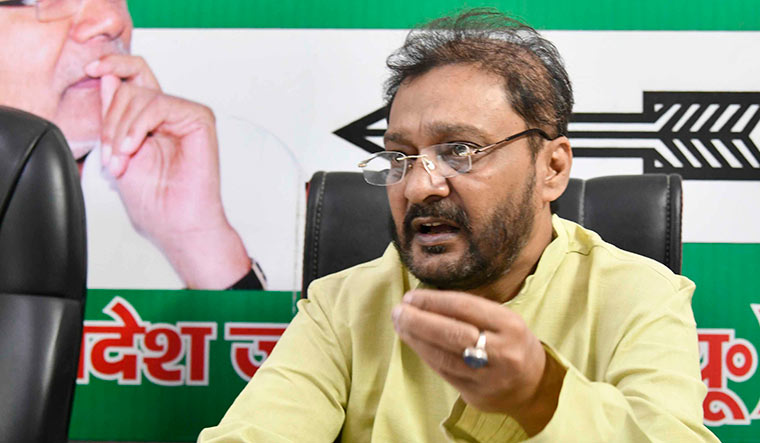 Q/How hopeful is the JD(U) of retaining power?

A/Those who have experienced life in Bihar 15 years ago know the value of Nitish Kumar. And the new generation is still hearing stories about the old days from their parents. During Lalu Prasad’s rule, industrialists and even professionals, like doctors and engineers, fled the state fearing for their lives. Life in Bihar was miserable, what with robberies, murders and kidnappings happening in broad daylight. Parents had no peace of mind till their children returned from school. Housewives would worry for the lives of their husbands if they would get a little late from work. After Nitish Kumar came to power, law and order came under the control of the police, and criminals and anti-socials went to jail. The people who want peace and development will vote for Nitish Kumar.

A/He prevented dropout of girl students. When he gave free bicycles to girls, there was a demand that boys, too, be given bicycles. That was also granted. Today, schools in Bihar have good attendance percentage. Schools have basic facilities. Travel became smooth with new bypasses and flyovers being built. A metro project has been initiated in Patna. Roads have been built to connect most villages. Ensuring 24-hour power supply is a great achievement. The scheme to supply tap water to all homes has made much progress.

Q/Does Nitish Kumar have the support of the minorities?

A/Minorities know for sure that they would get justice under Nitish’s rule. It was after Nitish Kumar came to power that legal proceedings were initiated against those found guilty in the inquiry report on the Bhagalpur clashes. Those who had occupied the homes of Muslims who had fled Bhagalpur following the riots were evicted. And those who had fled were brought back and settled into their homes.

Hindu-Muslim riots came to an end during Nitish’s rule. The riots used to start from kabristan (graveyard) because it was a common practice to encroach on them. The Nitish Kumar government conducted a survey of about 8,000 Muslim graveyards and evicted encroachers. About 5,500 graveyards have been secured with walls built at government expense. With that, the clashes have also ended.

Q/It is alleged that migrant workers who returned to Bihar during the lockdown were harassed by the government.

A/That is a baseless charge. As soon as the lockdown was announced, the bank accounts of 21 lakh migrants who worked in other states were credited with Rs1,000 each. About 22 lakh people had returned to Bihar in special trains. Of them, about 15 lakh—who came from places where the disease had already spread—were accommodated in quarantine centres for 14 days. The government spent Rs53,000 per person on this. A total of Rs10,000 crore was spent on Covid-19 services.

Q/Was the Lok Janshakti Party’s decision to leave the alliance and contest against the JD(U) a setback?

A/We see the immaturity of LJP president Chirag Paswan in this. A few people may be misleading him so as to split the NDA vote. The confusion ended when BJP President J.P. Nadda and Union Home Minister Amit Shah made it clear that the LJP had no place in the NDA.

Q/When the results come, are there chances of the BJP ending up with more seats than the JD(U)?

A/None other than the BJP President J.P. Nadda has announced that the alliance’s chief minister will be Nitish Kumar, whatever be the number of seats that each partner wins.