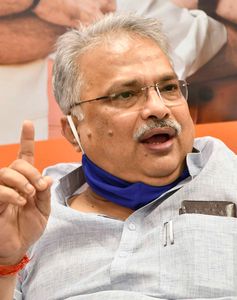 Q/Is there a possibility of a BJP-LJP alliance post elections, as LJP leader Chirag Paswan claims?

A/The NDA is going to the polls proclaiming Nitish Kumar as its chief ministerial candidate. The central leadership of the BJP has clarified that those who do not recognise Nitish Kumar’s leadership have no place in the NDA. We are going to the polls projecting the image of Prime Minister Narendra Modi and Chief Minister Nitish Kumar. We are seeking votes in the name of the good governance provided by the Central and the state governments. It was the Nitish Kumar government that took Bihar from the ‘lantern age’to the LED bulb age. Nitish Kumar should return to power for corruption-free governance to continue.

Q/Won’t the decision of the LJP to contest on its own help the opposition?

A/Which opposition are you talking about? The opposition line-up is in a shambles. Even Upendra Khushwaha and Pappu Yadav have formed certain fronts. Are they the opposition?

A/Look, Jitan Ram Manjhi’s Hindustani Awam Morcha and Mukesh Sahni’s Vikassheel Insaan Party, which were part of the so-called Grand Alliance, are today with the NDA. The term Grand Alliance has no meaning any longer. The RJD has become a family party. The Congress is weak in Bihar. When was the last time the CPI won a seat in Bihar? The RJD’s ally is the CPI(ML), which had indulged in mass murders during the Lalu Prasad government.

Q/The opposition has alleged that unemployment has become worse following the lockdown.

A/Under the job guarantee scheme, the government is giving jobs to migrant workers who have returned from other states during the lockdown. They are also getting free rations. They are also being imparted skills and given incentives and loans to launch startups. The women’s self-help groups are creating job opportunities. The criticisms are being aired without looking at these initiatives. In 15 years, the Lalu-Rabri governments did not even provide one lakh jobs. The Nitish Kumar government has given jobs to 6.5 lakh people in 15 years.

Q/But the government has failed to find a solution for the recurring floods.

A/The floods in Bihar are a problem that ought to be solved at the international level. Floods hit Bihar when Nepal opens dams during the rains. This can be solved only through talks between India and Nepal. This year, the government put Rs6,000 in the account of every flood-affected person. Funds were also provided from the prime minister’s housing scheme for rebuilding homes.