Supreme Court judge Justice N.V. Ramana sounded prescient when he said last month that as judges are self-restrained when speaking out in their own defence, they are now construed as soft targets for criticism. Last week, Andhra Pradesh Chief Minister Y.S. Jagan Mohan Reddy wrote a rare letter to Chief Justice of India S.A. Bobde, accusing Ramana of influencing the functioning of the state High Court and his alleged proximity to former chief minister N. Chandrababu Naidu and referred to an Anti-Corruption Bureau investigation into “questionable transactions”of land by Ramana’s two daughters and others in Amravati.

The optics of a Constitutional functionary complaining to the CJI against a sitting judge is worrisome for the judiciary, which has been dealing with crisis after crisis since the press conference by four senior judges of the court in January 2018. The development has tainted the ascendency of Ramana, who is set to take over as CJI in April 2021. All eyes are on how Bobde deals with the latest crisis. 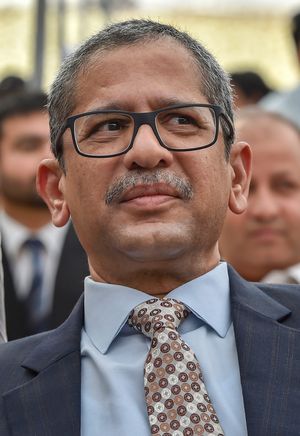 “Any citizen of the country has the right to send a communication to the CJI if he or she feels that a wrong has taken place. Whether the charges levelled are correct or false…will have to be assessed by the CJI,”said senior advocate Lalit Bhasin.

He said the chief minister should be asked to proceed in accordance with Article 124 (4) and 124 (5) of the Constitution, which deal with the process of impeaching a sitting judge. It is also being debated if the court can initiate criminal contempt proceedings against Reddy since he chose to go public with the charges.

“If the chief minister genuinely meant to raise an issue of concern, he should have written a confidential letter to the CJI,”said senior advocate Gopal Sankaranarayanan. For much less, he said, activist-lawyer Prashant Bhushan was convicted of contempt of court.

“It can have a catastrophic effect on the justice delivery system if judges are targeted like this,”said Supreme Court advocate Sneha Kalita. “A petition has been filed on the issue. However, I feel that the court should take suo motu action to send out a strong message.”

It is claimed that Reddy’s public campaign against Ramana is a result of an order passed by the three-judge bench headed by Ramana that resumed proceedings against Reddy in a disproportionate assets case on October 9. “The timing is questionable,”said Supreme Court lawyer Shilpi Jain. “A letter has been addressed to the CJI regarding a sitting judge who is hearing a matter that could have repercussions in a case in which the letter writer is an accused.”

Reddy may have his own credibility issues, but he has managed to put the top court in a spot of bother.