Despite a high number of tests, UP struggles to contain Covid-19 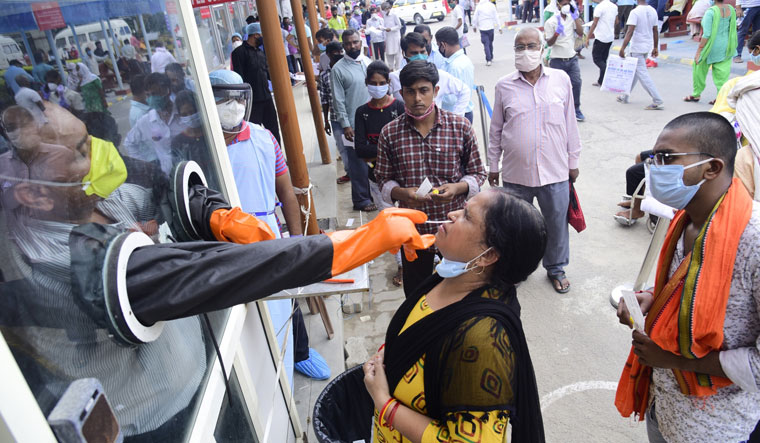 Test point: People queue up for a Covid 19 test outside a hospital counter in Lucknow | Pawan Kumar

On August 16—the seventh day of running a high fever—Ragini Asthana’s breath became wheezy. The 56-year-old teacher was rushed to the Pandit Uma Shankar Dixit hospital in her hometown Unnao. She did an antigen test for Covid-19, which came back negative. But her oxygen and blood pressure fell rapidly. She was then referred to the Ursula Horsman Memorial Hospital, Kanpur, and was admitted to the ICU on the first floor. By then, Asthana could barely move. Yet, in the absence of a catheter, she had to drag herself to the only toilet available on the ground floor, from where the hospital’s Covid-19 wing operated. Her oxygen levels improved slightly before plummeting again. Family members said that the same nurses and doctors moved between the ICU and the Covid-19 ward. When they asked an attendant to wear gloves, they were asked to provide the same.

Around 4:30am on August 19, after receiving four injections over two days to stabilise her blood pressure, Asthana was declared dead. The family was given, what they call, a temporary death certificate without the hospital’s stamp. It listed cardiorespiratory arrest as the cause of immediate death. Chronic obstructive pulmonary disease was the antecedent cause. The family said that she had never experienced breathing distress earlier. Her body came in a bag with injunctions to not open it. “Her symptoms pointed to Covid-19, but we could not get an RT-PCR test despite a chief medical officer (CMO) from another district calling the hospital for it,” said Asthana’s nephew Ankur Khare. “Losing her is difficult. Not knowing what we lost her to is more difficult.” The family then got prescriptions from a doctor in Kolkata for tests at private labs. One member tested positive and has since died.

Asthana’s case illustrates multiple strands in Uttar Pradesh’s Covid-19 struggle. There is testing, but not necessarily of the right kind. The situation magnifies staff shortages in hospitals and how non-Covid patients bear its brunt. It highlights the helplessness of health care workers, many without the basic protection of gloves. With more than three lakh cases, Uttar Pradesh is one of the five states that contribute to almost 60 per cent of the country’s caseload.

Chief Minister Yogi Adityanath has been relentless. Every morning at 10, he huddles with Team 11—a bureaucratic steering committee for the pandemic. He travels constantly to monitor the districts, and has pushed for the highest number of single-day tests. He is ably helped by a health minister (see interview) known to keep his head down and work without making big statements.

Yet all is not well.

The state’s public health care system is crippled by corruption—there is an ongoing inquiry into the procurement of pulse oximeters and thermometers by panchayats above the mandated prices. The state ranks sixth from last on the country’s list of doctors to population ratio. One in five posts of laboratory technicians is vacant. Most government hospitals do not follow the protocol of having at least 20 per cent beds in the ICU, needed for the increasing number of critical patients.

Also, the lockdown was not wholly utilised. Ambulance drivers in many districts struck work over delayed salaries. Existing manpower was not readied. In Lucknow, for instance, the faculty of many super specialty hospitals, instead of training for the pandemic, went on summer break. Multiple doctors said that key management positions in hospitals were filled by political push and there was a crippling communication gap.

“The crisis was not understood,” said a doctor serving in a Covid-19 ICU. “Its management is unevenly distributed. The same doctors and nurses keep working instead of having a pool to draw from. The way we are forced to work is unethical and inhuman.” At the same hospital, resident doctors on duty for seven straight days begged to resign.

Private hospitals have faltered. At Lucknow’s TSM Medical College and Hospital, 38 patients requiring Level 3 (L3) care died as it was only equipped with L2 facilities. The management refused to comment, but THE WEEK accessed a review report that read, “Patients with co-morbidities are not assessed.... The control room is not functional... Most deaths occur between 10pm and 8am as doctors do not take rounds.”

Nuzhat Husain, officiating director of the Ram Manohar Lohia Institute of Medical Sciences (RMLIMS)—one of the three government institutions providing Covid-19 care in Lucknow—said, “It is easy to judge negatively. Right up to the CM’s office people are working 24x7 to manage this situation. We have done well on the testing front in terms of numbers and reach. We are conducting molecular tests in places like Azamgarh and Banda—unimaginable six months ago. The situation is evolving. We are keeping pace.” 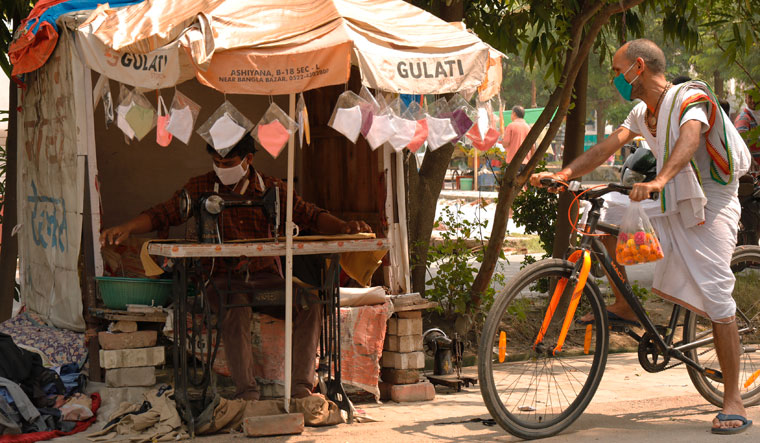 Stitch in time: A tailor makes masks by the roadside in Lucknow | Pawan Kumar

Director General of Health Devendra Singh Negi said that the state was doing well. He said paediatricians, physicians and chest specialists were being trained to manage BiPAP machines and high-flow nasal cannulas (both systems to pump oxygen). Nurses, ward boys and sanitation workers were trained for infection control and biomedical waste management.

However, video training or quick courses do not translate into the ability to offer critical care. As Pravin Kumar Das, the anaesthesiologist in-charge for RMLIMS’s Covid-19 hospital, said, “A nurse with years of ICU experience has instincts that cannot be developed overnight.”

Negi said that the state was geared to meet the need for increased oxygen supply. “Though we have not faced shortages, we are giving licences to new suppliers in the shortest possible time,” he said. “We will reduce production of industrial gases and divert capacity to oxygen production, if needed. A big oxygen plant is coming up in Modinagar.”

Doctors, besides battling their own fears, are also harassed. On September 4, the district magistrate of Raebareli allegedly called the CMO a donkey and threatened to skin him. Sachin Vaish, chairperson of the Provincial Medical Services Association, said that such complaints were common. “We do not want rose petals or the beating of thalis. We demand respect,” he said. “Everyone is under pressure, but that is no excuse for foul words and mistreatment.” The burden on doctors is also attributed to the undue influence of bureaucrats in the Covid-19 management. Negi, an anaesthetist, though discounted this view.

Dr Kafeel Khan, the paediatrician at the centre of the 2017 Gorakhpur tragedy (wherein 70 children at the Baba Raghav Das Medical College died owing to stoppage of oxygen supply), said, “The state’s health system is a white elephant. When doctors and health workers do good, they are penalised. Who will dare speak about shortcomings?”

Deficiencies in Lucknow offer a window into how critical the state’s challenges are. On August 2, Sudeep Sarkar, 44, the owner of a printing press, tried to get a Covid-19 test done at a government health centre. He had high fever, body pain and laboured breathing. Sarkar lives alone and drove himself for a test after popping a pill. He stood in line for two hours only to be told that he could not be tested despite his temperature being high. He went to another government centre but the designated testing time was over. The next day, at a third centre he was told there were no test kits. A desperate Sarkar took to social media. “I was distraught,” he said. “For hours, I retweeted every Covid-related tweet with a comment to draw attention to myself.” There was no response from the state machinery. On day five, as he stood for hours in another line, the kits ran out again. “I threatened to call the media. It was only then that I was tested,” said Sarkar, who tested negative.

The state’s media is walking a blurry line, often running blind items with racy headlines. One report was titled, ‘Doctors gobble food worth lakhs’—this, for news about money spent on transporting and quarantining doctors who came off Covid-19 duty in hotels.

Husain said that while the media is eager to criticise, society should be asked to be responsible, too. The High Court has stepped in to ensure some public accountability by pronouncing that those without masks be penalised.

Uttar Pradesh’s Covid-19 trials have just started. When it shall look back to list what was lost and gained, the dead like Asthana will need answers like the living.