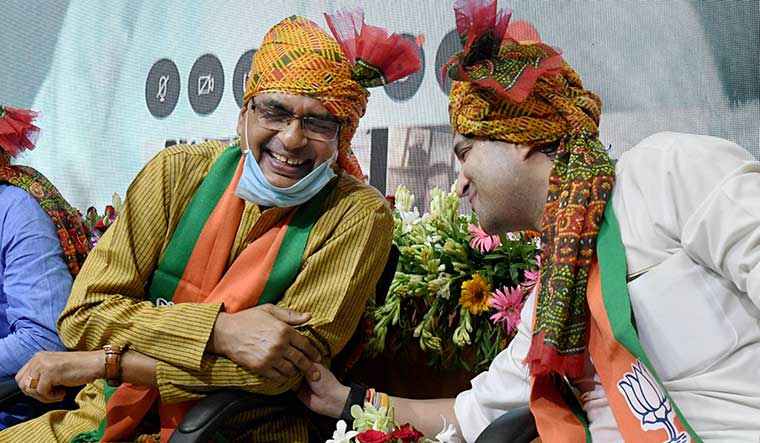 WITH BYELECTIONS due in 27 assembly seats in Madhya Pradesh, the BJP and the Congress are caught in a deep political quagmire. The depth of it was evident from two political developments in the last fortnight. On September 8, the BJP’s powerful leader in Gwalior, Satish Singh Sikarwar, joined the Congress in the presence of state Congress president and former chief minister Kamal Nath.

Sikarwar resented the BJP’s decision to induct Jyotiraditya Scindia, MP, and his supporters in March. “We have always fought feudalism, and the person against whom we had been struggling for years is now in the BJP. It was not possible to continue there. The struggle against feudalism will now continue through the Congress,” he said.

Sikarwar is considered close to Union Minister Narendra Singh Tomar, who is also from Gwalior. Interestingly, a few days before Sikarwar joined the Congress, Tomar and state BJP president Vishnu Dutt Sharma had held a series of coordination meetings with party workers in nearby Guna and Shivpuri districts. The workers were told to wholeheartedly support Scindia and his followers in the run-up to the bypolls. Sikarwar’s move, say observers, could be Tomar’s way of indicating his displeasure at Scindia’s growing clout.

Sikarwar had contested the Gwalior East assembly constituency in 2018, but lost to Munnalal Goyal of the Congress. Goyal is in the BJP now, and he is assured of the party ticket to contest the bypoll in Gwalior East. Sikarwar’s entry into the Congress means he would again take on Goyal; only the poll symbols would change.

Some of the other 26 seats, too, are likely to witness similar fights. “The resentment against the Scindia camp is very much there in the BJP, and it extends from ground-level workers to top-rung leaders,” said political commentator Manish Dixit. “This internal issue is sure to harm the BJP in the bypolls. Sikarwar’s is the first big direct move of displaying the displeasure openly.”

The first incident that hinted at the troubles in the BJP and the Congress happened two weeks ago. On August 26, the Congress sent a delegation of former ministers to Gwalior, three days after the BJP claimed that it had inducted as many as 75,000 former Congress workers in the presence of Scindia, Tomar and Chief Minister Shivraj Singh Chouhan. The delegation’s task was to counter the claim and attack the government. But, with big leaders like Kamal Nath and Digvijaya Singh keeping away from the event, the Congress could not attract even a fraction of the media attention that the BJP had secured for its event.

“The BJP’s show and the Congress’s response are the best examples of the political situation in the state now,” said political analyst Girija Shankar. “The opposition cannot go on pitching [former minister] Jitu Patwari against Chouhan, or [legislators] Sajjan Singh Verma and N.P. Prajapati against Scindia and Tomar, if they are serious about the polls.”

The bypolls, which have to be held before November 29, are as crucial as assembly polls. The revolt of 22 Congress MLAs under Scindia’s leadership had helped the BJP topple the Congress government in March. Three more Congress legislators later joined the BJP, while two seats fell vacant after the incumbents died. The bypolls in 27 seats will now decide the fate of the Chouhan government, which is nine seats short of majority in the 230-member assembly. “Elections are won solely on management, and the BJP is far ahead in this department,” said Shankar.

According to Dixit, Congress faces the difficult task of finding effective candidates in a region dominated by Scindia. “Digvijaya Singh has some support, but Kamal Nath does not have much hold in the Gwalior-Chambal region, where 16 seats will go to the polls,” he said. “Also, the party is unable to put the BJP government as much in the dock as they should, despite issues like fuel price hike, a collapsed economy, farmer suicides, large-scale unemployment and the Covid-19 crisis.”

Unrest has been brewing in the BJP after Scindia’s entry. Party veterans like Jaibhan Singh Pawaiya have tacitly made their displeasure known. According to Dixit, even Yashodhara Raje Scindia, who had welcomed her nephew’s decision to join the BJP, has not been taking part in party programmes despite being a minister from the region. Home Minister Narottam Mishra, who hails from Gwalior, has also been keeping away from events featuring Scindia.

Sources say the Scindia issue has so touched the BJP workers on the raw that the party has decided to keep him away from the coordination meetings held by Tomar and Sharma. BJP leaders, however, say the meetings are a routine affair. “There is always a need to motivate party workers,” said the party’s chief spokesperson Deepak Vijayvargiya. “We also conduct post-poll meetings to analyse the party’s performance down to the booth level and discuss strategies. So nothing should be read into these meetings.”

Jitu Patwari said the Congress was preparing for the bypolls by strengthening its organisation and taking up issues. “We cannot make the same mistakes as the BJP, which has been putting people’s lives at grave risk by conducting mass programmes despite the Covid situation,” he said. “But if the elections were to be held tomorrow, we are completely prepared.”

Kamal Nath said he was confident of a thumping victory. “The Congress can get, and is getting, as many leaders into its fold as it likes,” he said. “But we don’t make everything a media event. Surveys show that we are winning all seats. People may not stand with the Congress or Kamal Nath, but they will definitely stand with truth.”