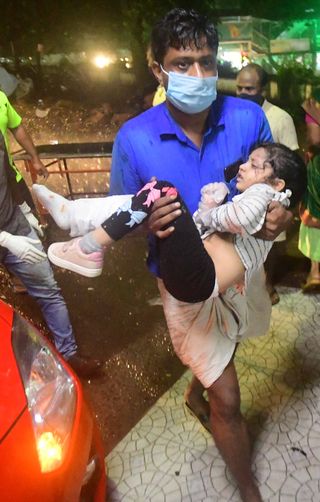 Rush to rescue: A child injured in the air mishap at the Kozhikode airport being taken to a hospital | Hashim P.K.

The year was 1982; the venue was Karipur in Kerala’s Malappuram district.

A huge crowd had gathered to see their long-cherished dream of having an airport in the Malabar region take wing. Welcoming guests to the foundation stone-laying ceremony was an elephant that belonged to one of the richest families in the area. The family had handed over more than 100 acres for the airport; the elephant, all decked up, was there to bring good fortune to the project.

Little did they realise that a decked-up elephant was not enough to ward off disasters in the airport if there was no vision to support it. On August 7, 2020, the Air India Express Flight 1344 from Dubai carrying 190 people skidded off the airport’s tabletop runway while trying to land amid heavy rain. The aircraft fell 35 feet into the valley and broke into two. Eighteen people, including the pilot and the co-pilot, died and 114 were injured.

The Karipur airport, officially called the Kozhikode Calicut International Airport, was built by razing hills. Its tabletop location makes it one of the most challenging airports for pilots, since there is no margin for overshooting the runways. At 2,860 metres, the airport’s main runway is only about 400 metres longer than the runway in Mangaluru, where a similar tragedy happened in 2010.

“A detailed technical probe will find out the exact reasons why the tragedy happened. There could be multiple reasons. But regardless of the findings, common sense is enough to realise that, had there been a longer runway, this tragedy would not have happened,” E.K. Bharat Bhushan, former director-general of civil aviation, told THE WEEK.

Bhushan, who retired as the state’s chief secretary, had been associated with the airport since the stone-laying ceremony. He was sub-collector of Malappuram then. Later, as district collector, he fast-tracked the completion of the airport in 1988. As DGCA in 2012, he addressed several safety concerns in the airport.

According to him, the Airports Authority of India (AAI) had long wanted the runway be extended. “But there has been no movement, thanks to local opposition to land acquisition. There have been instances where officials who had gone to survey the land were manhandled by local people,” he said.

“This accident could have been easily averted had there been a little more vision,” said Bhushan, who is from Malabar.

The story of the Karipur airport is one of long waits, tight purse-strings and lack of vision. The airport was first announced by Rafi Ahmed Kidwai, India’s first minister for communications, in 1953 along with 12 other airports. While all the other airports opened within a decade, Karipur had to wait till 1988.

In fact, the idea of the airport can be traced to Ayub Khan, who became president of Pakistan. It was he who first proposed an airport in Kozhikode in the mid-1940s. He was heading the Indian Army cantonment in Kannur then.

The Malabar Chamber of Commerce had been campaigning for an airport as Kozhikode was a commercial hub even then. The project got life when 214 acres were acquired in 1968. The estimated budget was 014.5 crore.

But the plan remained dormant for more than a decade. After many dharnas in Kozhikode and Delhi, work finally began in 1982 and was completed in 1988. “It was a long-cherished dream of the people of Malabar,” said Dr P.A. Kunjappu, whose father was the “Karipur Adhikari” who owned much of the airport land.

According to Alikutty, a former postman who has written a novel in which the Karipur airport has a central role, Karipur was chosen because of the availability of water resources. “I used to bring English newspapers for the officials from Mangalore who had come to survey land in the 1960s. At that time, the whole area was a grazing field for cows,” he recalled.

According to K.K. Kunjalankutty, who was associated with the airport from 1970 to 2004 in various capacities, the proposal to extend the runway has been pending for more than two decades. “There had been many moves for land acquisition, but they were all scuttled,” he said. “Unless political parties who are powerful in the region come forward, there will not be progress.”

Politically, the area in and around Karipur is dominated by the Indian Union Muslim League. IUML leaders, however, deny that they were not interested in developing the airport. They also counter the allegation that the accident happened because of the relatively shorter runway.

“The inquiry has proved that the accident was due to the pilot’s mistake and not because of the runway’s length,” said P. Abdul Hameed, the local IUML legislator. Hameed said his party had been consistently demanding that the airport be developed.

But the Kondotty gram panchayat, which is ruled by the IUML, passed a resolution against land acquisition for the airport in 2013. Why are IUML supporters opposing land acquisition? “That is because successive state governments and the Central government failed to come up with convincing packages for rehabilitating those who will lose their property,” said Hameed.

IUML sources, however, told THE WEEK that a few hardline Muslim political groups were the real hindrance. “They are behind the opposition to the GAIL pipeline project and the national highway expansion, too,” said a leader.

Amid these hindrances, a larger airport was opened in Kannur in 2018. That airport has a 4,000-metre runway—the fourth longest in the country—and is spread over 2,300 acres. It has attracted a major share of non-resident Indians from Malabar, who earlier had to depend on the Karipur airport. The situation may prompt the civil aviation ministry to shut the Karipur airport until it is modernised.

“The people of Malappuram should realise that the Karipur airport has no future unless there is development,” said K.N.A. Khader, IUML legislator. “We got this airport after decades of struggle and we should do everything possible to develop it. This airport is so close to our hearts.”

There could not have been a better display of this ‘bonding’ with the airport than the way the local people rushed to the rescue of passengers trapped in the aircraft. Ignoring heavy rain and Covid-19 fears, they reached the spot minutes after the mishap, and helped take passengers to hospital in autorickshaws, cars and other private vehicles.

“As soon as we heard the loud sound, we rushed to the spot,” said Shaheer K.K., who was part of the rescue operation. “Many were bleeding heavily and we knew they had to be in hospital at the earliest.”

Did they not think about the possibility of an explosion, as it had happened in the Mangaluru crash? “No,” he said. “All we thought at that time was how to rescue passengers trapped inside the plane.”

Throughout the night, there were long queues in hospitals to donate blood. The airport was part of a Covid-19 containment zone, and one of the passengers who died was later found to have been infected. So the state government has asked all rescue workers to quarantine themselves. Nearly 500 people took part in the rescue operation.

Their courage, however, has received boundless praise. Air India thanked them saying they had risked their own lives to save many passengers. “Taking a bow to humanity!” it tweeted. “A standing ovation from our hearts to the people of Malappuram, Kerala, who had showered us with kindness and humanity during the uncertain incident. We owe you a lot!”

For a safer airport

Fill up gorges, up to the peripheral boundary; land belongs to airport authorities. Ramps can be built up to the compound wall

Night landing can be allowed, but needs complete instrument lighting on the runway, including approach and centreline lighting

Large aircraft should not be allowed to land unless runway slope is levelled out to make minimum 3,000m of runway

Engineered Materials Arrestor System, though costly, can be used. For Runway End Safety Area, soft arrestor can be used Get high pressure rubber removal equipment like in the Mumbai airport and runway friction test equipment