India gets its first legislator from the Siddi community

Shantaram Budhna Siddi was in his village, Hittalahalli in Uttara Kannada district, when someone called him from Bangalore on July 23 and told him that he had been nominated to the Karnataka Legislative Council. Siddi, 55, dismissed it as a prank. More calls came, and finally he realised that he had become the first person from the Siddi community to become a legislator. Feeling humbled, he sat down with his wife, Susheela, and their two children.

Shantaram is also the first Siddi graduate; he took his degree in economics from Karnatak University. The nomination to the upper house of the legislature, he says, was “a recognition given to my three decades of service and to the Siddi community.”

The Siddis are an ethnic group of African descent. The Portuguese brought them to India as slaves and sold them to Muslim rulers and wealthy landlords in Hyderabad, Karnataka and Gujarat. Some became soldiers; others worked on farms and in plantations.

The Siddis of Karnataka have lived in small settlements near the Western Ghats for generations. The settlements are spread across the five taluks of Uttara Kannada district (Karwar, Ankola, Yellapur, Siri and Mundgod), Khanapur in Belagavi district and Kalaghatagi in Dharwad district. Most of them are farmers who depend on forest for livelihood. 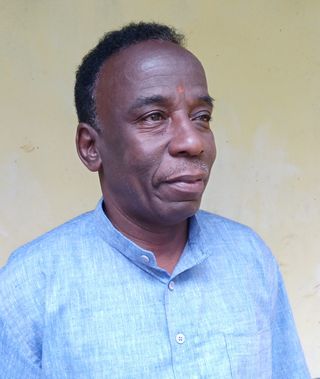 Shantaram began working for the RSS-affiliated Vanavasi Kalyana Karnataka in Uttara Kannada in 1989, but insists that he is no politician. “My people are overwhelmed with my nomination as we cannot even dream of contesting an election,” he says. “The last time we saw one of our own hold a political position was when Lawrence Khaitan Siddi was elected president of Yellapur taluk panchayat. The Siddi women are getting elected to gram panchayats after the government made it mandatory for them to have at least one Siddi member. Many youth are growing politically aware. But numerically, we are a small community (of 40,000 people) and do not wield enough political power.”

Prashanth Siddi, who has acted in more than 70 Kannada films, says Shantaram has been working for the uplift of tribal communities for three decades. “He has worked without expectations, spending from his own pocket many times,” he says.

The last time the Siddis in Karnataka made news was when Kamala Mingel Siddi won a bronze medal in 100-metre hurdles in the 1993 SAF Games in Dhaka. Kamala was one of several Siddi children handpicked and trained by the Sports Authority of India under the Special Area Games project, launched in 1987 to identify and train children who have natural physical aptitude for athletics. The project was abruptly scrapped in 1993, leaving many recruits shattered.

Shantaram, whose daughter is a graduate and son is a pre-university student, says the Siddis remain backward because they are mostly uneducated and landless. “The school dropout rate among tribal children is worrying. Unless we make learning a happy experience for the children, the fear of failure will keep them away from school. I hope to build hostels with better facilities. Only a handful of our youth are pursuing higher education. I want the numbers to grow,” he says.

The Siddis were accorded Scheduled Tribe status in 2003, but it has done little to empower them. “It has not helped much as the major tribes corner all benefits. Social discrimination also forces our youth to drop out of schools,” says Jayaram Siddi, the first advocate from the community. The stringent Forest Rights Act remains a big impediment. “Small farmers are tilling small parcels of forest land,” says Shantaram. “The government must grant them land rights (title deeds) to make them self-reliant. Our people are deprived of benefits of the ST status as the guidelines to get a caste certificate are complicated.”

Shantaram was born in a poor farming family in Hittalahalli in Yellapur. To make ends meet, he worked with his parents and three brothers and a sister in the fields of local landlords. A bright student, he stood first in class 7 and his teacher was keen that he study further. “I joined a free hostel in Ankola run by the social worker Nirmala Gaonkar,” he says. After his graduation in 1988, he returned to farm labour and was hoping to land a decent job when two RSS workers, Prakash Kamat and Ajit Kumar, met him.

“They asked me if I would work for tribal communities, especially Siddi, which was an endangered tribe and the most backward, too, he says. “In August 1988, we set up the first tribal students’ hostel in Mundgod. Today, we have eight such hostels across six districts and our activities are spread across 18 districts. Around 52 tribal communities are part of our network and we work with 22 tribal groups.”

The Siddis are often mistaken to be foreigners because of their appearance, but they have assimilated into the regional culture. They speak a dialect that is a mix of Konkani, Kannada and Marathi, and follow Hinduism, Islam or Christianity. The women wear sari, dot their forehead with vermillion and are experts in local cuisine. They depend on forest produce—honey, tubers or even red ants—to whip up delicacies. “The Siddis are unique and the only tribe to follow three different faiths. They all come together for the annual ‘Siddi Naasa’, where they worship their ancestors (spirits),” says Professor H.C. Boralingaiah, former vice chancellor of Kannada University, Hampi.

The Siddis, however, still battle discrimination. “It is common for people to stare at us or touch our hair. I remember an incident in Kumta, where I was attending a shakha. I overheard two schoolboys saying a black bear had visited their school. They were referring to me, and it hurt,” says Shantaram. “But things are slowly changing. Our youth in cities like Bengaluru, Dharwad and Belagavi are finding greater social acceptance. But, if we go to smaller towns like Bhatkal, Honnavar or Siddapura, people still laugh at us. To our people, it is traumatic.”