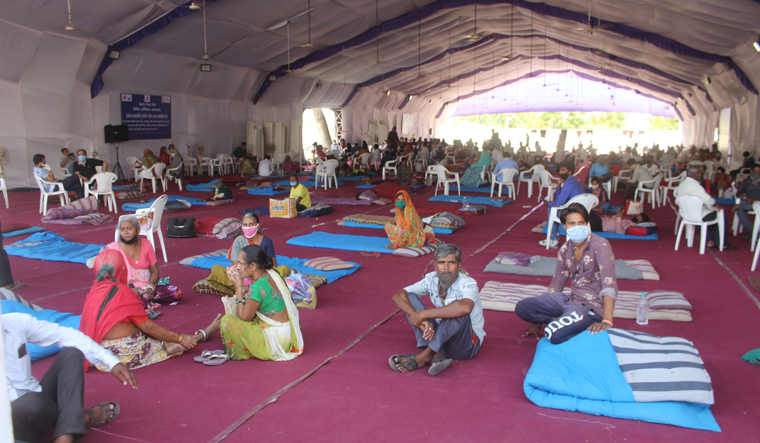 Devram Bhisikar, 70, died of Covid-19 on May 29, a day after he was admitted to the Ahmedabad Civil Hospital. His grieving family collected his body, wrapped from head to toe in opaque plastic sheets, and headed to a nearby crematorium. They did not have a last look at him because of the fear of the virus.

The morning after the funeral, the family received a call from the hospital. They were told that Bhisikar had tested negative for Covid-19 and that he was being shifted to a general ward. Shocked and confused, two relatives rushed to the hospital, only to be informed that the call was a mistake and that the body they had cremated was indeed Bhisikar’s. They returned home crestfallen. But in the afternoon, they received another call. Bhisikar was in recovery, apparently. Their hopes were rekindled, but once again cruelly dashed. It was finally confirmed that Bhisikar was dead, and that the goof-up happened because of a miscommunication among hospital staff.

Gujarat’s battle against Covid-19, too, seems to have become a tragedy of errors. Gone are the rosy stories of the initial days of the fight, when there were viral videos of patients praising the quality of medical care at the Ahmedabad Civil Hospital, and the state government regularly briefed the media on the measures being taken to contain the outbreak.

Things went south in barely a month. The briefings stopped and stories of apathy and mismanagement at the Civil Hospital began doing the rounds. There are more than 5,300 active cases in Gujarat now—4,000 of them in Ahmedabad. Nearly 1,100 people have died, with Ahmedabad accounting for 80 per cent of the toll.

The pandemic has exposed the failings of the BJP’s model state, which Narendra Modi had run for 14 years before he became prime minister. As the number of cases soar, the government appears clueless about how to restore normalcy. Businesses have been allowed to reopen, except those in containment zones, but there seems to be no detailed, longterm roadmap for recovery.

The only silver lining, one that is highlighted by the state government, is the rate of recovery from Covid-19 in the state, which is higher than the national average. But then, questions are being asked about whether the rate shows the real picture. Recently, a patient collapsed and died hours after he was discharged from the Civil Hospital; the apparent cause of death was lung failure.

The government’s response to the outbreak has been error-prone. Poor coordination, a flawed testing strategy, lack of quality care, overburdening of junior doctors, late reporting of infections and patients with co-morbid conditions have made matters worse. The situation is so grim that the Gujarat High Court recently flayed the government for its inept response. Apart from taking up a batch of public interest petitions, the court is also looking into an anonymous letter from a doctor at the Civil Hospital, detailing the systemic problems affecting treatment.

More than 200 doctors in the state have contracted Covid-19. The Civil Hospital recently lost its head nurse. She had fever for days apparently, but was given proper attention only after she developed breathlessness. 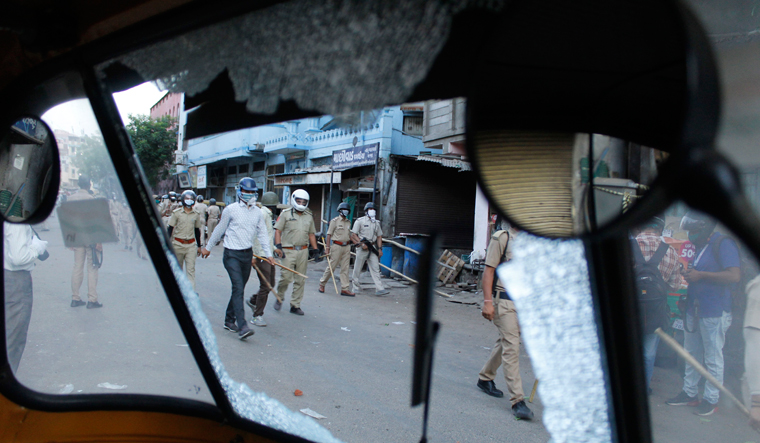 Rocky road: In early May, some residents of Shahpur area of Ahmedabad pelted stones at the police who were enforcing the lockdown | Janak Patel

The failure to scale up tests and the violation of social distancing rules have accelerated the spread of the virus, especially in cities. Carriers from urban areas have been spreading the disease in small towns and villages across Gujarat. Even people in power have been lax in taking precautions. Ahmedabad Mayor Bijal Patel has made public appearances and given interviews without wearing a mask.

Dr Hariprasad Iyer of Ahmedabad, who is on Covid-19 duty, said people became overconfident and broke social distancing rules. “People are educated, but not disciplined enough,” he said. “Prevention is better than the cure. See the example of Kerala, Karnataka and Assam. In these states, primary health care facilities are also good.”

Gujarat spends very little on health care. This year, it allocated 011,243 crore for health and family welfare, which is just 5 per cent of the total outlay. “As per the National Health Policy of 2017, the health budget should be 8 per cent of the state budget,” said Prof Hemant Shah of H.K. Arts College in Ahmedabad.

Himani Baxi, assistant professor of economics and public policy at Ahmedabad University, said decentralisation was an issue. “Health care is primarily the responsibility of urban bodies,” she said. “Over the years, the state government kept certain financial powers with it and did not let the urban bodies grow.” This, she pointed out, is completely different from the Kerala model, which empowers civic bodies.

The prevalence of co-morbid conditions among patients is also a challenge. Jayanti Ravi, principal secretary at the health ministry, told THE WEEK that 84 per cent of patients who died of Covid-19 had co-morbid conditions. “In Gujarat, the mortality rate of seasonal flu has also been high. Probably, this is the same in Covid-19 as well,” she said.

One reason for the high mortality rate, say experts, could be that most patients have contracted the L strain of the virus, which is more virulent and aggressive. “People from Europe and the US landed in western and northern India,” said Dr Parthiv Mehta, an Ahmedabad-based pulmonologist. “Looking at the graph of progression, the virus seems to be following the trajectories in Italy and the US. In Kerala, people mainly landed from Gulf countries, where the strain was less potent.”