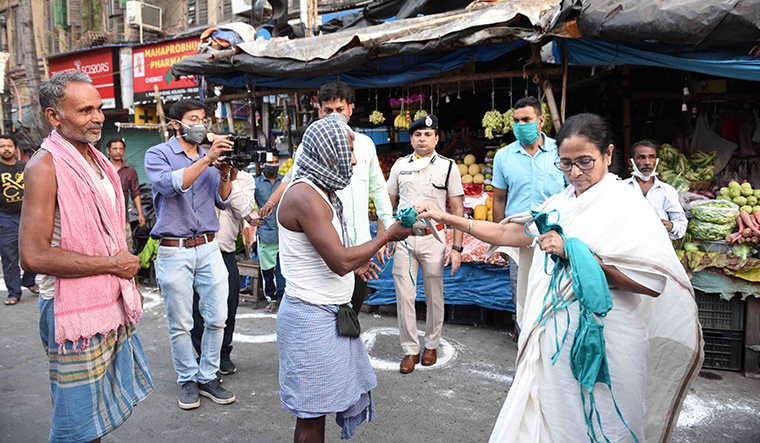 The day was hot and humid with no signs of a storm, but Suman knew what Mamata meant. Penning a few melancholy lines was her way of blowing off pressure amid her battle to prevent the Covid-19 storm from wreaking havoc on West Bengal. “The thunder will end one day; but the leaves will fall from the tree onto the graveyard,” read the last stanza. “Shed a tear or two then, if possible.” Struck by the lyrics, Suman set them to a tune. He named the raga as Mamata.

Suman’s song has notched up a good number of views on social media, but Mamata’s efforts to fight the pandemic has not been so well received. The state government has been struggling to contain the Covid-19 fallout. On the health care front, there is an acute shortage of equipment and medicines. There are only 10,000 medical kits for the 9.2 crore-strong population, and just 65,000 personal protection equipment sets for more than two lakh doctors and paramedics. More than 50,000 people are already in home quarantine, while lakhs of migrants from all over India continue to stream in, despite the lockdown.

There has been a rise in the number of Covid-19 cases among those who have returned from Maharashtra, Gujarat, Kerala and Karnataka. While the state government has tried to isolate potential patients, it is unable to carry out widespread testing because of the shortage of kits.

So far, there is no evidence of a community spread; but, if it happens, the rickety health care infrastructure in the state could collapse. That is why Mamata has written to 18 chief ministers, asking them to take care of distressed Bengali migrants in their states, rather than taking measures to bring them home.

The state government has been accused of hiding the magnitude of the problem. On April 3, for instance, the state health advisory committee declared that six patients had died of Covid-19. Hours later, though, chief secretary Rajiva Sinha said only three were Covid-19 patients and that the others had died of “other complications”. The doctors, however, say all six had tested positive.

“I don’t intend to play politics now,” said Surjya Kanta Mishra, the CPI(M)’s state secretary. “But the chief minister must not do damage by suppressing the number of infected people. It could spell doom for all of us.”

A big worry is that the authorities could not trace the source of infection of three patients who died. So, is West Bengal heading towards community spread? “I don’t rule that out,” said virologist A.K. Nandy. “If the reason and source of infection are not specified, it could be because of a community infection at a very local level.”

The Union government had dispatched around 10,000 testing kits to West Bengal, but the state has tested only around 1,000 people. THE WEEK asked Chandrima Bhattacharya, minister of state for health, the reason for the lag in testing. “How can you expect all to be tested?” she asked. “People are tested according to guidelines of ICMR (Indian Council of Medical Research).”

So, is the state procuring more testing kits? “Find that out from the health department. I cannot say offhand,” she said. Mamata is in charge of the department and Bhattacharya is the junior minister.

With assembly elections due next year, there are also allegations that Mamata is politicising relief initiatives. “I have a dual role to play,” Mamata said on April 3. “I am the chief minister and, at the same time, I am running a party. So, when my government is giving rations to the people, I am also leading the party that sends relief material to the people. But I don’t mix them up.” 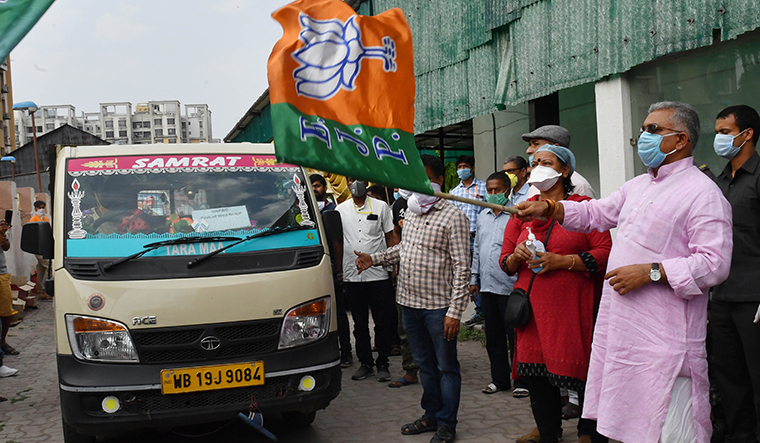 The opposition BJP and Left parties allege that the state government is channelling supplies through the Trinamool Congress. Ministers have allegedly violated the lockdown to distribute rice and vegetables, forcing people to ignore social distancing. Mamata herself has been accused of drawing crowds while hitting the streets to check whether people were adhering to safety norms. She stopped venturing out only after officials and doctors warned her against making herself vulnerable.

Mamata’s efforts to reach out to the people was part of a larger political plan. Political strategist Prashant Kishor, who is shaping her campaign for the 2021 elections, had reportedly planned to use the Covid-19 outreach to boost the chief minister’s image.

Having now chosen to cloister herself in office, Mamata is ensuring that her political rivals, too, are adhering to the lockdown. “We had plans to send relief materials,” Dilip Ghosh, BJP state president, told THE WEEK. “But we found policemen outside our doors and they prevented us from going out.”

Despite obstacles, he said, the BJP had managed to distribute food across the state. “We gave food to more than 66,000 families. We will reach each and every corner of Bengal, which is reeling from food shortage,” said Ghosh.

The state government, however, insists that there is no food shortage. “We are providing rations to eight crore people,” said Food and Supplies Minister Jyotipriyo Mullick. “Because of the lockdown, it is difficult to run the system and monitor crowds. But we are streamlining it.”

The state government had released rice at Rs26 per kilogram, but prices have shot up because of widespread hoarding. “We had opened 900 of 1,200 rice mills in the state to avert a shortage of rice in the market,” said Mullick. “But, despite that, people are hoarding.”

Also, the state government’s efforts to streamline procurement has not benefited farmers. Jakir Hossein, a brinjal farmer in Burdwan, said he had invested Rs2 lakh in his crop but received only Rs14,000 while selling the produce. He usually sends his produce to Kolkata for Rs25 per kilogram, but this time he was forced to sell it at the local market. “I farm high-quality brinjals. But I had to sell them at 07 per kilogram,” he said.

Why did he not sell them to the government? “Because one has to bribe officials,” he said. “We need to gift them bottles of liquor. It is better to sell in the market.” As supplies have dried up, brinjals are selling in Kolkata for Rs60 per kilogram.

According to Hossein, if farmers like him are not compensated immediately, they would not recover. “If my boro [rice] crop fails, only the government can save me,” he said. “The government, either at the Centre or in the state, would have to waive my earlier loan because I will have to take a fresh loan to survive.”

Knowing that she alone cannot solve the problem, Mamata has demanded Rs25,000 crore as aid from the Union government. But her seemingly combative moves—she decided not to attend Prime Minister Narendra Modi’s second video conference with chief ministers on April 1—may not help her cause. “Her decision [to skip the video conference] was not well thought out, and was against the state’s interest,” said Governor Jagdeep Dhankar.

As losses plague farmers, the middle class, too, is upset. Because of the lockdown, West Bengal has not been able to source fish from Andhra Pradesh, which meets 80 per cent of its demand. The situation has forced many fish-loving Bengalis to grudgingly turn vegetarian, leading to a further increase in vegetable prices. As Mamata struggles to deal with the problems, it is the BJP that is finding the situation favourable.