After my studies I will practise in Kerala 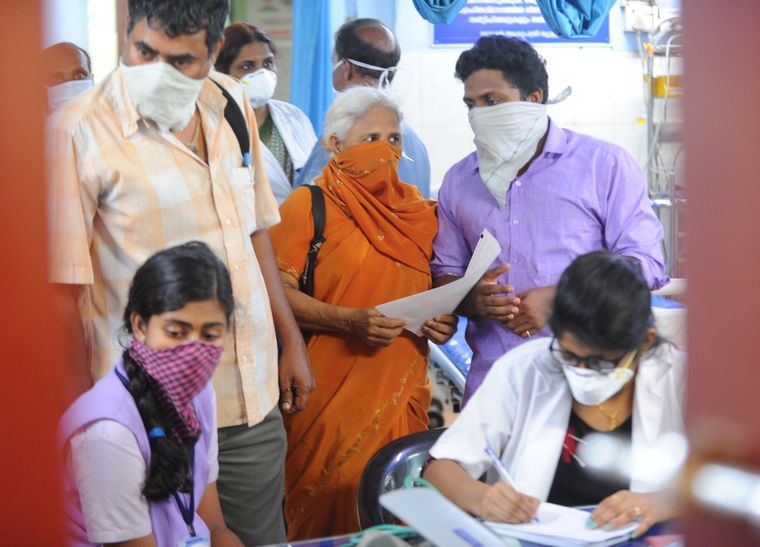 People cover their face at the casualty of the district hospital, after the Coronavirus affected patient was identified in Thrissur | Jeejo John

OF ALL THE movies that you watched while in the isolation ward, which was your favourite?

The Flu, a movie on a virus epidemic in a South Korean city, she said.

The answer says it all about the medical student from Thrissur, Kerala, who was the first confirmed case of Covid-19 in India. Cured, she was sent home from an isolation ward in the Government Medical College, Thrissur, a few days ago. At no point in that ordeal that lasted almost a month was she scared. And she is now all the more happy about her decision to study medicine. Excerpts from an interview:

Were you scared at any point?

No. The symptoms subdued within a few days. The virus infection was confirmed after that. I would have been scared if the sickness had persisted.

How did you feel when you left China?

I am a third-year medical student in Wuhan University. I was in Wuhan till January 24. We remained at the hostel even though we came to know about the outbreak, and doctors regularly came for checkups. Though we were not planning to go home for the holidays, we decided later to leave.

When you arrived in India, you did not have any symptoms of the infection. How did you end up in the isolation ward?

I complied with the Kerala health department's direction and informed an officer at my place that I had arrived from China. I confined myself to my house. When I developed a sore throat on January 27, I informed the officer. They sent an ambulance to move me to the general hospital in Thrissur.

Were you scared then?

I was not scared, but worried that others might have contracted the virus from me. Even when the doctors took the fluid and sent it for tests, I did not think I was infected. In fact, I was pretty cool at that time. Then the results of the test came, and all the others in the isolation ward were sent home.

Who told you about the infection?

I suspected it when my test result was getting delayed, and saw it on news that one person was infected. Though my mother and friends were in the nearby room, I did not say anything. But when a few doctors came and started talking about the importance of being courageous, I was sure that it was me. I asked a doctor if the positive test result was mine. He said everything was normal, and asked if I was scared. I said I was not. Then four doctors came and told me that the test result was positive.

I knew about the deaths in China, and I knew that the days ahead would be tough. But the hospital staff and my family helped a lot. I spent 25 days in the hospital after the confirmation of the infection.

What was the first thing you did after confirming the infection?

I helped the health department to collect the details of all those who travelled and interacted with me.

How did you spend the days in the isolation ward?

I was shifted to the Government Medical College on January 31. Health Minister K.K. Shailaja visited and consoled me, and it was a great relief. When teachers started giving online classes from China, I started focusing on that. It was like a classroom as all the students were connected. The hospital set up WiFi and other facilities for me. I got whatever I wanted to eat. I ate a lot of biriyani.

What all movies did you watch?

I watched many on the mobile phone, and liked the Korean movie The Flu a lot. It is on a virus epidemic. My friends asked me not to watch such movies. So I moved to Malayalam comedies.

How did you feel when the test result became negative?

I was happy, but I thought I would inform everyone after two consecutive negative results. But by then everybody knew about it. My teachers in Wuhan are still quarantined in their houses. I have been told that they were all relieved to hear about me. In China, they mostly hear about deaths.

What do you think about your decision to study medicine?

I am happier now about it. I am out of the isolation ward, but the doctors and the hospital staff who treated me continue to be there. That is the greatness of this profession. After my studies I will come back to Kerala and practise here.