The arrest of D.K. Shivakumar has put his political ambitions on the line 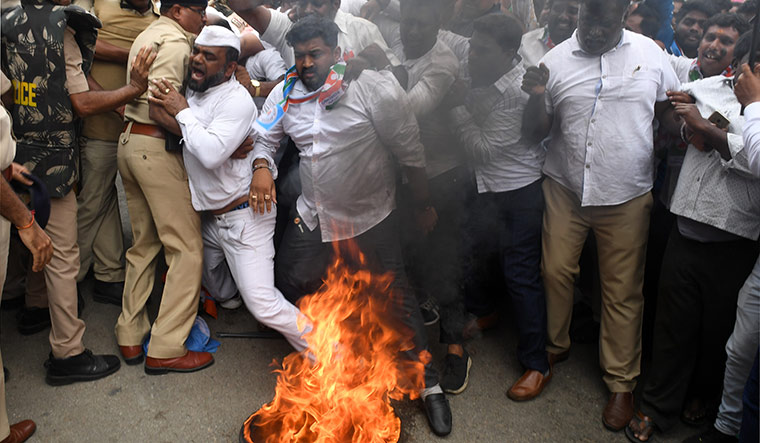 CRISIS AFTER CRISIS has hit the Congress party in Karnataka, and now it is the turn of the party’s go-to man, D. K. Shivakumar, to feel the heat. Two years after his properties in Delhi and Bengaluru were raided by income tax sleuths to unearth stashes of unaccounted cash, the former minister has been arrested by the Enforcement Department on charges of money laundering. This has put the opposition on the warpath; they had already been claiming that the Centre has been misusing investigative agencies.

After four days of interrogation at the ED offices in Lok Nayak Bhawan in Delhi, Shivakumar’s sudden detention on September 3 came as a jolt to the Vokkaliga strongman, who was hoping to be appointed the next state Congress chief. When investigating officers tried to quietly bundle him out of the ED office for a medical check-up prior to his detention, a huge gathering outside turned chaotic on sensing their leader’s arrest.

“I am not a coward. It is political vendetta,” screamed Shivakumar and waved at his supporters. Shivakumar spent the night at the hospital as he had high blood pressure, and was produced before the Special Court for Economic Offences the next evening. The court granted the ED custody till September 13. The arrest triggered massive protests by Congress workers across Karnataka. Buses were stoned, vehicles were torched and highways blocked the next day, particularly in Bengaluru and Kanakapura, Shivakumar’s constituency. 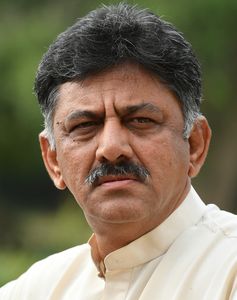 “It was only a small tax evasion case, but I am being framed in a money-laundering case,” Shivakumar told reporters in Bengaluru, before leaving for Delhi. “In 2017, I had kept 44 Gujarat MLAs in a resort to save them from BJP’s bid to poach them. The IT sleuths swooped down with CRPF men. For the last two years, I am being witch-hunted. My widowed mother’s property has been declared as benami and all our properties are attacked, including my sister’s.”

The arrest has shocked the Congress party, too, as investigating agencies seem to indicate that Shivakumar’s financial dealings have to do with his “party work”. “The arrest of Shivakumar is illegal. There is no iota of evidence against him. This mismanagement and anarchy is only to target Congress leaders,” said Congress spokesperson Randeep Surjewala. Former chief minister Siddaramaiah and Karnataka Pradesh Congress Committee chief Dinesh Gundu Rao termed the arrest “politically motivated”.

It all began with simultaneous raids on Shivakumar’s residence and offices across 82 locations in Bengaluru and Delhi in August 2017; sleuths recovered unaccounted cash worth Rs8.59 crore from his Safdarjung Enclave apartments in Delhi. In his statement, Shivakumar is said to have admitted that around Rs41 lakh of the cash seized belonged to him, and that it was the agriculture income earned from his ancestral property. However, he failed to provide evidence for the same.

In January 2019, the ED filed a case based on a charge-sheet filed before the Special Court for Economic Offences by the Income Tax department in June 2018. Besides wilfully attempting to evade taxes, Shivakumar was also accused of creating and operating a hawala network. The ED also issued summons to Shivakumar.

On August 30, Shivakumar flew to Delhi to depose before investigating officers, after the Karnataka High Court dismissed his plea to quash the ED summons. On September 4, the ED produced Shivakumar before the special court and sought custody for further interrogation.

The arrest has put a question mark on Shivakumar’s political future and raised questions over the nature of his businesses. One of the richest MLAs in the state—he has assets worth 0840 crore—the chief minister’s chair has always eluded him. Shivakumar is a master strategist who has shielded the party from rough political weather.

In 2002, when the Congress-NCP coalition led by Vilas Rao Deshmukh in Maharashtra was on the verge of collapse, Shivakumar, the urban development minister in the S.M. Krishna cabinet, hosted the party’s Maharashtra MLAs at the Eagleton Resort in Bengaluru for a week. He personally escorted them to Mumbai on the day of the trust vote and ensured that Deshmukh’s government survived. Shivakumar earned the trust of the Gandhi family when he also hosted Congress MLAs from Gujarat in 2017 to aid Ahmed Patel’s re-election to the Rajya Sabha.

On May 15, 2018, when arch rivals Janata Dal (Secular) and Congress joined hands to keep the BJP out of power, Shivakumar swung into action and kept his party MLAs together at the Eagleton. BJP chief minister B.S. Yediyurappa had to step down before the floor test, paving way for the JDS-Congress government. When asked about the alliance, Shivakumar said, “I had to swallow bitterness. I consider the party’s future more important than personal enmity. We came together to form a secular government in the state.”

The two Vokkaliga leaders, Shivakumar and H.D. Kumaraswamy, cosying up to each other was resented by many in the Congress, including Siddaramaiah, who is a bete noire of JDS patriarch H.D. Deve Gowda. Shivakumar had campaigned for Kumaraswamy’s son, Nikhil Kumar, in the Lok Sabha polls, to appeal to the Vokkaliga community, of which Deve Gowda is still the tallest leader. On the other hand, he also worked to gain prominence within his own party, where he was overshadowed by Siddaramaiah, a late entrant who became chief minister within seven years of jumping ship from the JDS.

In July, when the Kumaraswamy government was to face a floor test after 20 party men stayed away from the trust vote, Shivakumar rushed to Mumbai to bring back the rebels. Though the coalition crumbled, he won plaudits for his effort. “The ED is acting on the orders of the Centre,” said Kumaraswamy. “Where was the IT [department] and the ED when BJP leaders were offering crores of rupees as bribe to purchase the MLAs to topple my government? This is a murder of democracy. Those who oppose the BJP will be tortured.”