Closure of tanneries in Kanpur brings environmental and employment concerns 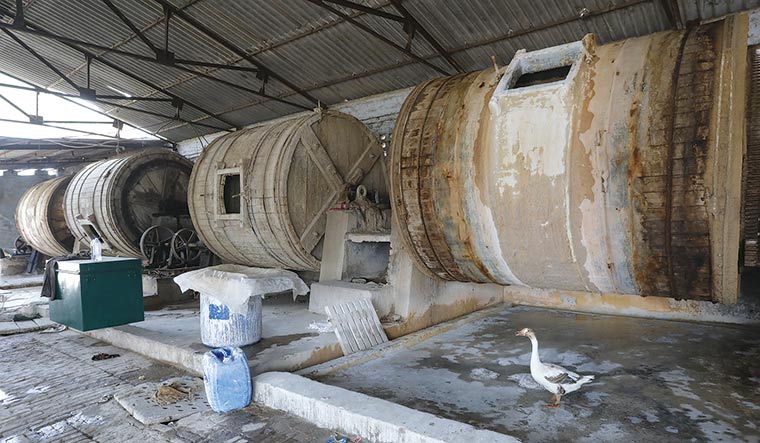 An overpowering smell of chemical and contamination, made worse by the still summer air, hangs over the riverside slum of Budhiaghat in Kanpur.

“I will kill myself if anyone shows me one drop of black water falling into the Ganga because of my work. The river belongs to everyone,” says Kishwari, a resident. The work she refers to falls under leather trade—the district’s most famous industry that is over a century old. More than seven months after the government initiated a major clampdown, prompted by the high levels of river pollution the industry was creating, loss of livelihood has brought misery of the kind never reported before.

While the industry involves a trade of many parts, the government’s anti-pollution measure is focused on tanning, which is the treatment and preparation of raw hide for manufacturing. Tanning requires large amounts of water and several chemicals, the most significant of which is chromium. When pumped back into rivers, it makes the water and soil toxic and aquatic life unsustainable. In Kanpur’s Jajmau area and its neighbouring district of Unnao, where most of the state’s tanneries are sited, the level of chromium in water has been persistently found to be much higher than the acceptable limit of 0.05mg/litre.

The ‘Status of Trace and Toxic Metals in Indian Rivers’, a 2018 report of the water resources ministry that cited the above limit, notes: “It [chromium] can cause allergic reactions, such as skin rash... respiratory problems... lung cancer and death.”

These concerns are not new. Yet, the initial orders for the closure of tanneries between December 15 and March 15 were made to ensure clean water in the river during the Kumbh Mela at Prayagraj. This decision was not peculiar to the Yogi Adityanath government. Earlier, too, units had been shut down three days before every significant date of bathing to ensure that visibly clean water came down the Ganga and subsequently the Sangam, where the pilgrims bathed. This time though, the closure window has been used by the state to find long-term solutions.

“The key change is our refusal to allow a reopening till all pollution control norms are met,” state’s principal secretary of urban development Manoj Kumar Singh tells THE WEEK. “The government is firm that not a single drop of untreated water will flow into the Ganga. Tanneries were shut earlier, too. The matter is before the regulatory bodies and we cannot set a time frame for the opening.”

The prime among the bodies cited by Singh is the National Green Tribunal (NGT), which, in July 2018, notes that water from Haridwar to Kanpur was unfit for drinking and, with a few exceptions, even unfit for bathing. “There was dumping of chromium at and around Jajmau and Kanpur,” it says. “There was violation of provisions of the Water Act, 1974, requiring closing of industries and prosecution. There has to be meaningful further action to restore the minimum prescribed standard for all the rivers of the country. The polluter has to pay the cost of restoring the damage.”

Taj Alam, vice president of the Unnao chapter of the state’s Leather Industries Association, says that though the industry was in agreement with the NGT’s determination, the government had selectively targeted tanneries.

“There is only despair for us,” he says. “The government started a staggered shutdown of units in November. We hoped that they would open after the Kumbh. Then we thought it would happen after the elections. But there is nothing forthcoming from the government. We are totally hopeless. There are other grossly polluting industries, such as paper and textile, but these have been left untouched.” 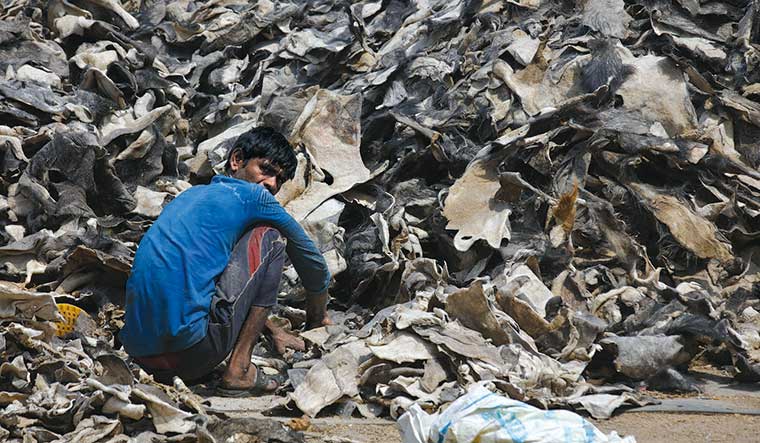 Mounting troubles: A worker sorts hides at a tannery in Kanpur. The closure of tanneries has led to immense loss of livelihood, especially to those working in smaller units | Pawan Kumar

Only 26 of the estimated 300 tanneries in Kanpur and six of the 84 in Unnao have been permitted operation. These are bigger units that employ between 200 and 800 people and have primary and secondary treatment measures for effluents in place. The ones that are shut are smaller units, some with just eight employees, which depend on the Common Effluent Treatment Plant (CETP) run by the Jal Nigam. Tanneries pay a monthly user charge of 05.33 per hide for treatment of the water they send to the plant. Most of the estimated five lakh employed by the industry—many among them migrants like Kishwari—have depended on the smaller units for generations.

Many of these units come under the Small Tanners Association. Its president Hafizur Rehman says that the government had falsely held the industry responsible for discharging effluents in the Ganga. According to him, the discharge from the tanneries goes to a network of underground channels—think of it as a conveyor system—and onwards to the CETP, from where it is treated and carried to fields to be used in irrigation. “If we were to release our water, it would spill on to the roads as there is no way for it to bypass the channels,” he says. “The government does not care. We are surviving on just one meal a day. We have had a grim Eid (in June). There was no money to even buy clothes for the children. The situation cannot continue.”

The first leather factory was set up in 1858, and since then the industry has steadily grown. A chronicle of the district’s history penned in 1858 by Durghaee Lal, who was employed in Kanpur’s High Court, reads: ‘The industry, which first made Cawnpore famous, was that connected with the tanning and currying of leather and the production of articles made therefrom.” The British promoted the industry to meet the demands of its troops. Kanpur accounts for more than 20 per cent of the leather and leather goods exported from the country. Experts say that the leather produced here is of a compact and moist quality, lending it a kind of durability that makes it ideal for use in military boots, safety shoes and saddlery that are put to rough use. The industry is an inclusive employer, taking in men and women from different religions and of different skill sets. Last year, it earned Rs10,000 crore, of which Rs6,500 crore came from exports.

Sarveshwar Shukla, joint commissioner of industries (Kanpur Division), says that the government’s commitment to promoting the industry could not be questioned. “Our coffers are open for its promotion,” he says. “We are providing loans, skill training, marketing support, tool kits and fiscal incentives to it. But there must be a switchover to clean and sustainable technologies.”

The help that Shukla refers to is part of the government’s One District One Product (ODOP) scheme, initiated in 2018 to support and develop indigenous products and crafts that are unique to the state’s 75 districts. In Lucknow, for instance, it is the craft of chikan embroidery. In Kanpur, it is leather. In 2018-2019, loans totalling over Rs3.38 crore were provided to 16 beneficiaries for expansion of the leather business under ODOP. These beneficiaries, as per documents procured by THE WEEK, include those who have criticised the government for the current crisis. There are murmurs that people are committing suicide and even selling their babies because of loss of employment. But multiple attempts to verify these claims drew a blank.

Taj Alam says that hearsay and exaggeration had muddied the core issues of pollution and livelihood loss. “The industry itself must bear its share of blame. Zero discharge and waterless discharge technologies are used in Tamil Nadu, where tanneries must buy water. It is not like here with the Ganga flowing at your doorstep,” he says.

Vinod Tare, professor of civil engineering at the Indian Institute of Technology, Kanpur, says there is not just one decisive factor for river health. “Tanneries, like other industries, discharge effluents, but are in no way responsible for the volume of upstream flow into the river,” says Tare, also founding head of the Center for Ganga River Basin Management and Studies. “The sustainability of the closure is under question, but polluters must pay while government departments cannot pass the buck. Our studies show that moving to cleaner technologies is commercially viable and does not lead to loss of employment.”

Farrukh Rehman Khan, regional manager, WaterAid India, says there are other issues of employee well-being that require urgent address. “The workers are mostly poor, live in shanties and have poor access to basic services such as clean drinking water and toilets. More investments in these will lead to higher productivity,” he says.

Ghanshyam, regional officer of Uttar Pradesh Pollution Control Board, says, “We are looking at any and all possible gaps that have existed, including the working of the treatment plant. No operations are being allowed in good faith anymore.” According to the UPPCB data, the twin steps of releasing more water into the Ganga and the closure of polluting units have led to improved measures of river health. Take, for instance, the level of dissolved oxygen—necessary for aquatic life—at downstream Kanpur. It was 5.50mg/litre in August 2018, but rose to 9.3mg/litre in December.

Back in Budhiaghat, these numbers make little sense to Kishwari. “I do not want the river to look or smell dirty. I do not want my children to go hungry, either,” she says.

It is a dilemma that cannot be left unaddressed anymore.