Sachin Pilot interview: 'We will get more than 20 seats in Rajasthan' 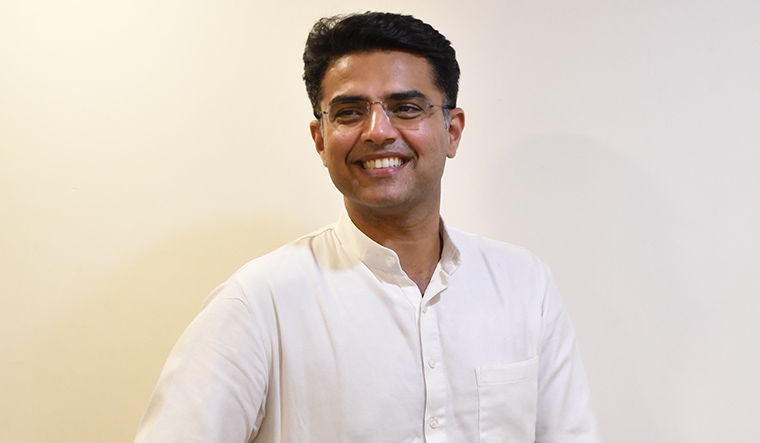 The Congress won the assembly elections. How is it poised for the Lok Sabha polls?

We have just come out of a victory in Rajasthan and we have a clear majority government. In 2008, the Congress had 96 of 200 MLAs, and in the Lok Sabha elections we got 20 seats. I see no reason why we cannot do better than that. Rajasthan usually tends to give the windfall of seats to the party that has just been voted into power.

We have taken major steps towards fulfilling our manifesto promises, including Rs 18,000 crore worth farm loan waiver, unemployment allowance, pensions and procurement of crops. On the other hand, the BJP leadership in the state is quite directionless after Vasundharaji has been moved out.

There was only a 0.5 per cent vote difference between the Congress and the BJP in the assembly polls.

Nationalism has been, is and will always be important for all Indians. When it comes to national security, anyone who raises an eyebrow towards our borders will get the same befitting reply, no matter who is the prime minister or who is in government. But, it is not fair for the government to hide behind the sacrifice and valour of our armed forces.

The BJP is using these issues because it cannot discuss unemployment being at a 45-year high or the negative impact of demonetisation on our economy.

Modi is being projected as a strong, decisive leader.

They say that he is decisive. Agreed. But what about the decisions? Are they helping or harming the country? Is our relationship with our neighbours better or worse? Is the situation in the Kashmir valley better or worse? People should actually ask how 350kg of RDX was brought inside the country and our young soldiers were martyred in Pulwama. Why a BJP MLA was assassinated in Chhattisgarh? And, [he] had promised that post-demonetisation, naxalism and terrorism would get over.

While people were angry with Vasundhara Raje, it is said that they are not so unhappy with Modi.

The BJP brought in ‘notebandi’ and GST. Farmers’ suicides are still taking place. The economy is a shambles. There are no jobs. Just because they were extremely angry with Vasundharaji does not mean they are not angry with Modi.

What response are you getting for the NYAY scheme?

It is a game-changer because the BJP has not been able to find an answer to it. People know about it in Rajasthan. There is a resonance to what we say on NYAY. The message is clear: if Modiji can waive 03 lakh crore for ten people, why not give Rs 3 lakh crore to the 20 per cent poorest people of India?

Is the Congress in Rajasthan a divided house?

We decided to authorise Congress president [Rahul Gandhi] to decide who will lead the government. Within 48 hours, he made a decision. I was part of the decision. So, there is absolutely nothing to suggest, except media reports, that there is groupism. We had worked hard together. That is why we formed the government.

When I went for Ashokji’s son’s [Vaibhav Gehlot] nomination, I said that as party president, it is my responsibility to see him through.

How many seats can the Congress win in Rajasthan?

We are getting a very good response. Our mission is 25. And, I think we should be able to get as close to it as possible.