The Dutch star looks set for a move to a bigger club; Manchester United is keen 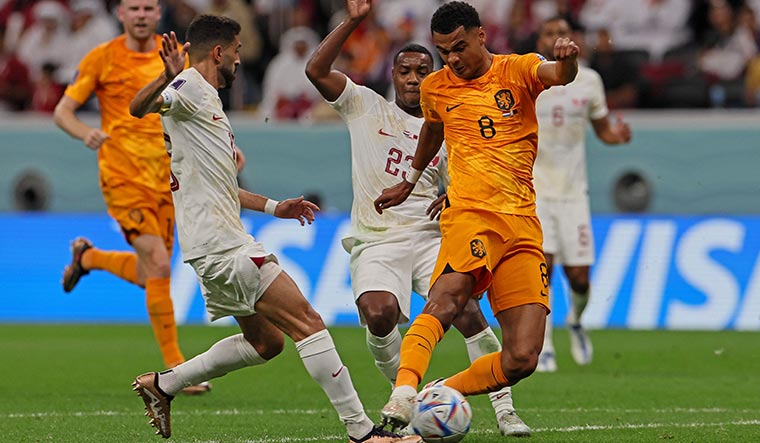 Made in eindhoven: Gakpo scores against Qatar | AFP

IT IS AN impressive list. Ruud Gullit, Ronald Koeman, Romário, Ronaldo, Phillip Cocu, Jaap Stam, Ruud van Nistelrooy, Mark van Bommel and Arjen Robben have all donned the red and white of PSV Eindhoven. The Dutch club played a crucial role in shaping their illustrious careers. It is doing the same to Cody Gakpo, too.

The 23-year-old has had a phenomenal 2022-2023 season. Deployed as a left-winger, he racked up 30 goal contributions (13 goals and 17 assists) in 24 games till the World Cup break, more than any other player in Europe’s six top leagues―England, Spain, Germany, Italy, France and the Netherlands. But, the fact that he plays in the relatively less competitive Dutch league led to lingering doubts. Can he perform on bigger stages, under pressure?

His performance in the group stages of the World Cup shows he can. In the first two matches, he helped a sub-par Dutch side earn four points with two brilliant goals. He added a third in a comfortable 2-0 win against Qatar as the Netherlands secured the top spot in Group A. Tougher tests are in the offing, starting with the round of 16 match against the US on December 3.

The 6’2” attacker is taking it all in his stride. “I know what I'm capable of, but it's always a challenge to reach your highest level,” he said in Qatar. “I'm not there yet, I think I can improve in a lot of things.” Gakpo was deployed as an attacking midfielder against Senegal and his goal in the 84th minute was the result of a well-timed run and an impressive leap to head the ball over the advancing 6'4” goalkeeper, Édouard Mendy. In the next match, coach Louis van Gaal asked Gakpo to play as a striker; the PSV star responded with a thunderous left-footed strike into the Ecuador goal from just outside the box. Against Qatar, he played as a striker again and scored from his first, and only, chance of the game, by drilling a low, right-footed shot from inside the box.

One header and one goal each with his (weaker) left foot and right foot. That, too, while playing out of his preferred left-wing role. There was much discussion before the tournament about where he would fit into van Gaal’s 3-4-1-2 system, which has no out-and-out wingers. Superstar Memphis Depay usually occupies the left-sided striker's role. Therefore, to guarantee himself playing time, Gakpo had to adapt; van Gaal thought that his skillset would enable him to play in a more central position. When asked if he thought the coach was right, Gakpo said the coach was often right.

Twan Scheepers, who coached Gakpo in his early days at the PSV academy, told ESPN before the World Cup that he would prefer to see Gakpo in his natural spot, but added that he was also capable of playing through the middle. And Gakpo is known to put team before self. Scheepers highlighted the importance of his family in the type of person he has developed into. 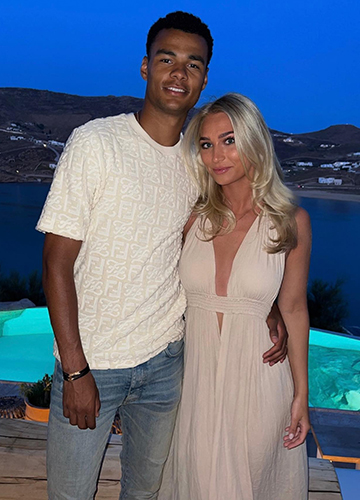 “His parents are very solid.... The parents, family, friends, his brothers, they did a great job in not pushing him too much,” said Scheepers. “They wanted to show that life is good. They are a religious family. I think that's important and a big thing in the world. He's quite relaxed. The only thing that matters to him is playing the game, and nothing bothers him around it.”

Johnny, Gakpo's father, was born in Togo and has Ghanaian ancestry. He played in the top flight in Togo and made one appearance for the national team. Gakpo's mother, Ank, was a Dutch rugby international and a teacher at a secondary school. He has two brothers: Sydney, who is older, and Duuk. Gakpo told the PSV website that his parents met in Togo and eventually settled in Eindhoven.

Born and raised in Stratum, a working-class neighbourhood in Eindhoven, Gakpo started joining Sydney to play in the neighbourhood when he was five, against older opponents. Sydney, six years senior, told Dutch magazine Voetbal International: “Cody was fanatical, he flew in with fierce tackles and never gave up.” Aged six, he was invited for a trial by PSV. He progressed well early on, but there was a period of concern in 2011.

“We had conversations to discuss our development three or four times a year and at the end of the season you were told whether you could stay or leave,” he said. “It was a narrow escape that season. I had some problems, but I was allowed to stay.” Elated, Gakpo, who was then three days short of his 12th birthday, took to Twitter on May 3, 2011: “Ik mag blijve bij psv YES (I can stay with psv YES)”. He has not been active on Twitter ever since.

Sydney, who has played professional football at a lower level, added that he never had any doubts that Gakpo would make it at the highest level because he had developed remarkable mental strength at a young age. When he was slightly older Gakpo started playing street football on top of his academy games. He credits it for making him tough and streetwise. “All animals were equal [on the streets],” he said. “It did not matter what kind of environment you grew up in. There were some very skillful street footballers. There were real battles. I was not always on the winning side.”

He also highlights the importance of his upbringing. “When I visited friends I always noticed that things were slightly different at our house,” he says. “The African upbringing is bit stricter. When I was young, I didn't like that very much, but when I look back on it, it's been really good. I am grateful to my parents for that.” The PSV star, who now reportedly earns around €1 million per year as wages, lives in his own house in the city centre.

When he started living alone in 2019, he said that he was enjoying the freedom. “At home, I regularly heard, “'Cody, turn that music down',” he said. “Now the music can be as loud as I want. The biggest change is that I'm on my own for everything, but, that is fine, it's part of growing up. I don't have a girlfriend yet.” That has since been rectified and Gakpo's girlfriend of two years, Noa van der Bij, 23, is in Qatar cheering him on.

Gakpo has never visited his father's country. “Every time he has a holiday, football has already started for me,” he said. “Too bad, because I would like to. Family lives there and I'm curious what life is like there, where my father grew up.” He has received his HAVO diploma (roughly equivalent to class 10). “VWO (class 12) could also have been done, but I thought that was too much homework,” he said.

Though he does not like homework, he has evidently approached his football homework with great dedication. His progress over the last few years has been observed with interest around Europe, but PSV has done a great job of shielding him and ensuring his continued development. This was, of course, in the best interest of the club, too, as he can now fetch a higher price. He is currently valued upwards of €45 million, but potential buyers may have to offer even more.

English clubs, including Manchester United, have evinced a keen interest in Gakpo. PSV also felt the pressure to cash in on him. Ultimately it was national team manager van Gaal who proved decisive. After his personal experience of the incompetence at United (he managed the team for two seasons), he has advised more than one Dutch player, and even current manager Erik ten Hag, to stay away from the club. He told Gakpo that a transfer in a World Cup year was not ideal as it may unsettle him.

But, once the World Cup is over, van Gaal's influence will diminish. And United is once again at the front of the queue. The club's budget has also been bolstered after terminating Cristiano Ronaldo's contract―the savings on his wages for the remainder of the season are reported to be around €25 million. But, there are a few Dutch players who have struggled to settle in the Premier League, including Johan Cruyff's son, Jordi, in the 1990s and more recently Donny van de Beek, both at Manchester United.

But, there are plenty of success stories, too, including current PSV manager van Nistelrooy. Gapko has benefitted greatly from exclusively having PSV legends as managers at club level. His breakthrough was under Cocu, who was replaced by van Bommel, before van Nistelrooy took over. van Gaal's guidance has also been invaluable. If he moves to United, he may get a suitable atmosphere to continue his growth under ten Hag, who has no PSV links, but is one of the best up and coming coaches in world football. Another positive is that United's notorious owners, the Glazer family, are reportedly looking to sell.

If he chooses to sign for United, Gakpo may have to adapt to playing as a striker, because the left wing is stacked (Marcus Rashford, Jadon Sancho and the Argentine teenager Alejandro Garnacho all prefer the flank). But, Gakpo has already shown his versatility and with ten Hag's coaching, the winger could even develop into an out-an-out striker. He only has to look at French legend Thierry Henry, who made the transition successfully during his time at Arsenal. 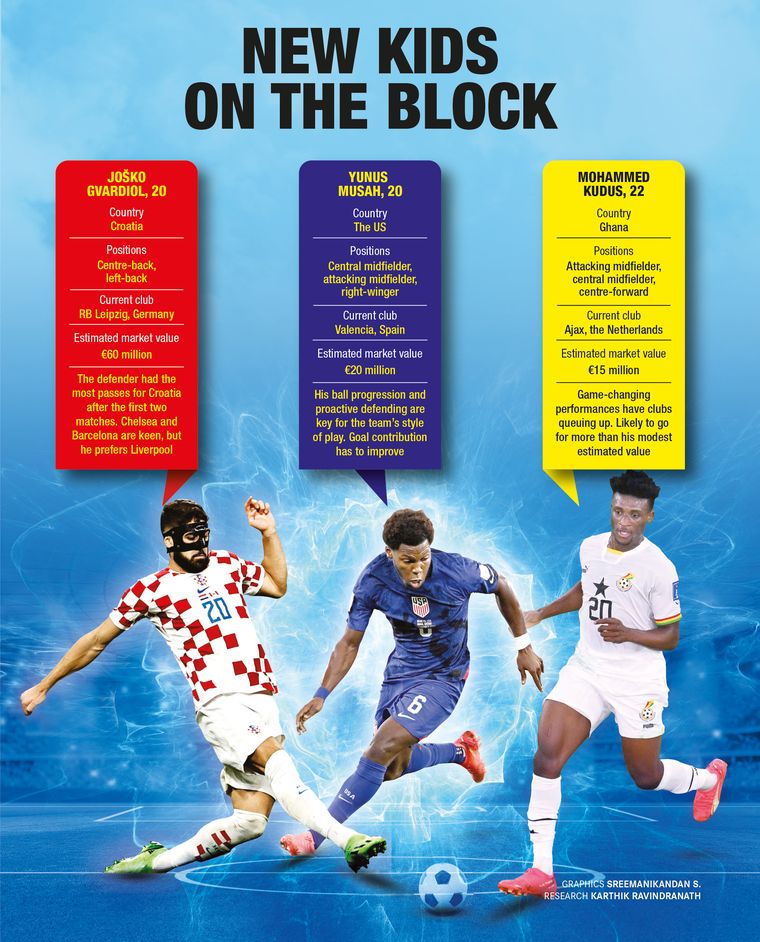