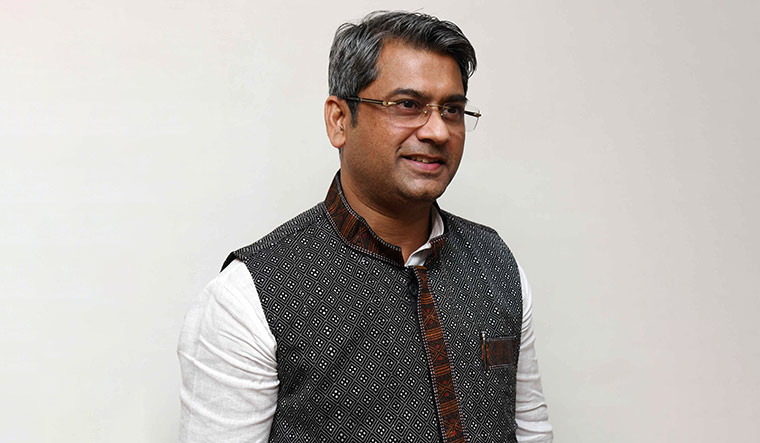 BJP POLITICIAN Kalyan Chaubey was pitchforked into the role of president, All India Football Federation, after a rather one-sided election on September 2. The bespectacled, tall former India goalkeeper beat former India captain Bhaichung Bhutia, 33-1. Since then, Chaubey has barely spent any time at home in Kolkata.

The 45-year-old’s immediate priority is overseeing the successful hosting of the FIFA U-17 Women’s World Cup, which started on October 11. The tournament, which ends on October 30, is being played in Bhubaneshwar, Goa and Navi Mumbai. Once the tournament is over, Chaubey’s main task will be to put the AIFF house in order with both the Supreme Court and FIFA breathing down his neck regarding the federation’s constitution and functioning.

Chaubey has bold plans for football in India, with a strong focus on infrastructure, grassroots and women’s football. As the first footballer to be elected as head of the AIFF, all eyes are on him as he strives to pull Indian football out of the deep hole it is in. In an exclusive interview with THE WEEK, Chaubey spoke about his plans and how he hopes to execute them. Excerpts:

Q/ How has it been for you since you took charge as president of Indian Football?

A/ Winning an election, that is a good feeling obviously. But from that moment onwards, I have started my responsibility towards the development of Indian football. I hope God will grace us―my team and I―so that we can take Indian football to the next level.

Q/ Now that you have had some time to look at things, what would the challenges be for you?

A/ There is absolutely no challenge! Because we know Indian football―I have been involved for the last 33 years. We know there are issues to be taken care of, so we are going in that direction.

Q/ What are these issues?

A/ Scouting is one of the biggest issues. For the national team you get 40 to 45 players, and then the team is selected from among them. In a country like India with nearly 1.4 billion people, there are pockets where football is popular. But, perhaps, it has become standard practice that football is limited to the cities where it is traditionally played. And clubs playing for ISL or I-League. But, beyond that also there is football. If you try and expand your player pool, there will be better opportunities for the maximum number of players. I believe this is most important.

Q/ What needs to be done to expand the player pool and unearth better talent?

A/ We have been saying for quite long that grassroots development is essential. We generally scout and train kids when they are under-12 or under-15. There should be a system at the age of six. But, here we learn from age 12. So we are six years behind the global standard. Focus on tapping kids at the age of six, and teach them basics like passing and receiving. If you focus on grassroots, you will get players whose basics are sound. And then you can go for competitive matches, bring in foreign coaches, etc.

But, what was happening is that we bring in foreign coaches, but our boys are not prepared to execute the strategies set by these coaches because their basics are not strong. We need to work on basics.

Q/ You mentioned the need to look for talent beyond cities. Where has been the impediment to that?

A/ Usually, AIFF coaches never go [to smaller towns]. Recently, a 16-year-old from Arunachal Pradesh played for Rajasthan United FC in I-League qualifiers. Our people should reach [far-off places] and spot such talent.

Q/ How is your new role when compared with being a politician?

A/ I would not say this is different. This is very normal. We are taught that whatever comes in life, a man should be ready to act on that. I would not say life has changed drastically. My days are still the same. I wake up early, got to bed late and work according to the task given. So there is nothing new. It is good for football. I have been in football for so many years.

Q/ What are your expectations from the FIFA U-17 Women’s World Cup?

A/ This is an opportunity for the government of India and state governments... hosting such an important event. That, too, when Prime Minister Narendra Modi says beti padhao beti bachao.... I am confident that with the support of the local organising committee, FIFA, the government of India and the sports ministry, we will conduct this well. I am confident [the chief ministers] will put their best foot forward and ensure the tournament is conducted successfully.

Q/ After hosting the 2017 FIFA U-17 World Cup, we have not been able to create much in terms of football structure. Your thoughts.

A/ The country is not the old India. If you see MNCs at top level, many have Indians as bosses; we have top scientists, scientists who have made Covid-19 vaccine and we have shared those with other countries. The kids playing now [are getting more] exposure matches. I am confident that though [we are behind], we will make up for it.

Q/ This is the year of the FIFA World Cup. Your thoughts?

A/ On September 9, I met the FIFA president and the Qatar FA president. Qatar has world-class sports infrastructure. AIFF has signed an agreement with QFA to use their advanced infrastructure, if needed.

Q/ Qatar is a small country, albeit cash rich, and it is hosting the World Cup. The obvious question is when will India’s time come?

Q/ About Indian senior team’s performances: What would you like to see from them in coming months?

Q/ What do you expect from I.M. Vijayan in his new role?