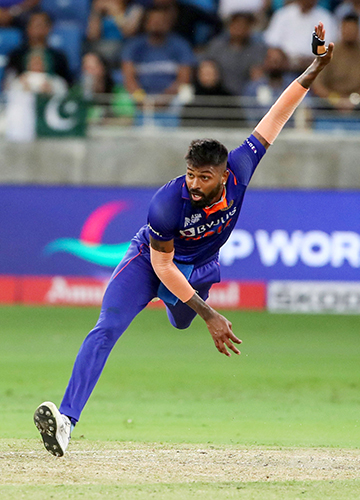 THE INDIAN TEAM managements, of today and the past, have always been looking for a unicorn, or something seemingly as rare―a guy who could bowl a full quota of overs and single-handedly win a game with the bat. It seemed for a while that Hardik Pandya was the answer. His entry into the white-ball teams in 2016 lent balance to the side, and he looked set for a long stay. Injuries, however, slowed him down to a trot. He carried a bad back for a while and eventually underwent surgery in October 2019. He only returned in late 2020, but it was not an ideal comeback; he was not bowling regularly and was essentially playing as a batter.

But then IPL 2022 happened, and he was stampeding. Pandya captained the newly minted Gujarat Titans to the trophy, contributing with both bat and ball. On the back of that performance, he returned to the Indian team in the shorter formats, now as a full all-rounder. And not only was he bowling all his overs, he was doing so with pace, often touching 140kmph.

On August 28, after hitting the winning runs against Pakistan in a tight Asia Cup match, Pandya put out a tweet―it showed him being carried off the field on a stretcher in the 2018 Asia Cup, and also him with his bat held high in the just-concluded tie. It was captioned: “The comeback is greater than the setback.”

Said former India batter Sanjay Manjrekar: “Everything about him currently is unreal. His bowling returns are unreal, [but] you get that with others as well. But his ability to keep calm and get runs under pressure [is unreal].”

Pandya’s successful comeback has boosted his brand value, too. He currently endorses 12 brands; four more are set to be announced later in the year. “By the end of the year, we expect him to represent at least 20 brands,” says Nikhil Bardia, head of sponsorship sales and talent, RISE Worldwide, a Reliance Industries firm. He adds that, over the past six months, Pandya’s rates have increased by about 30 per cent. He is also getting a lot of digital deals, says his team. Pandya’s social media following is third only to Virat Kohli and Rohit Sharma.

His coach and former India wicketkeeper Kiran More told THE WEEK: “He is definitely back to his best. In fact, he is better. He returns to the Indian team with experience this time.”

More praised Pandya’s approach to his recovery, specifically his decision to not rush back to bowling until fully fit. “He made it very clear to people that he would bowl only when his body was ready,” he said. “People misunderstood him, but full credit to him; he looked after his body very well.”

Team India might not have been satisfied with just Pandya the batter, but Gujarat Titans was more than happy to have him in any form. Speaking to THE WEEK from England, Vikram Solanki, director of cricket, Gujarat Titans, said: “We were confident that he would bowl again. [It came up] in conversations with him and those who worked with him. The bowling was always going to be a plus for us. Hardik as an all-rounder is [always] better.”

After a poor T20 World Cup in 2021, where he bowled only four overs in the entire competition, Pandya went back to the drawing board. He returned home to Baroda, to More, and worked on his game for three months. “He was very focused,” said More. “He would have intense net sessions in the morning and evening all those months. He is mentally very strong. It is difficult to return to the side post injury. Knowing that, he did not rush; he kept working on his bowling. Hats off to the Indian team management for being patient with him. When I saw him in the nets, he was not batting too well. He had not played much cricket, but it was about getting his rhythm back. There was a bit of a change in his bowling action, too, because of the surgery. He spent a lot of time watching his pre-and post-surgery videos and worked hard on his bowling. By the end of the training stint, he got into a fantastic rhythm going into the IPL and was finishing his follow-through very well. He had his physiotherapist with him at all times during the three months.”

More also felt that the IPL captaincy helped Pandya become a more mature cricketer. Solanki, who saw first-hand the effort Pandya put into the IPL, said, “He is the ultimate professional. He trained hard in the gym, did everything the strength and conditioning coaches asked him to do, got his bowling workload up, and was progressive in terms of how he went about his bowling intensity. [There was focus on] running, resistance work and nutrition. Having done all this, he got to a point where he could say that he wanted to bowl at pace.”

Maturity comes with calmness, which is the state of mind Pandya likes to be in while at work. It is this calmness that stopped him from rushing back to bowling, and which makes him a dependable finisher with the bat. “He is using his experiences to sort of get to a point where he is in a calm state as far as his cricket is concerned,” said Solanki. “My interactions with him were exactly that. He epitomises calm.... He said that if he remains calm, he can execute his game plan.”

After his Asia Cup innings, captain Rohit Sharma had said: “Since he made his comeback, he has been brilliant. When he was not part of the team, he figured out what he wanted to do with his body and fitness regime, and he is now clocking 140-plus easily. We all know his batting quality. He is a lot calmer now and more confident about what he wants to do, whether with bat or ball. It was always about understanding his game and he is doing that well now.”

A new chapter has begun in Pandya’s career. Before he left Baroda to take charge of the Gujarat Titans, he had told More that he wanted to win a World Cup for India. More has no doubts. And Pandya has two bites at the cherry: The ongoing T20 World Cup in Australia, and the ODI World Cup at home next year.