Chess: Gukesh is improving by the day, raising India's hopes

Even Anand did not win gold playing on the top board in the Olympiad, says GM Thipsay 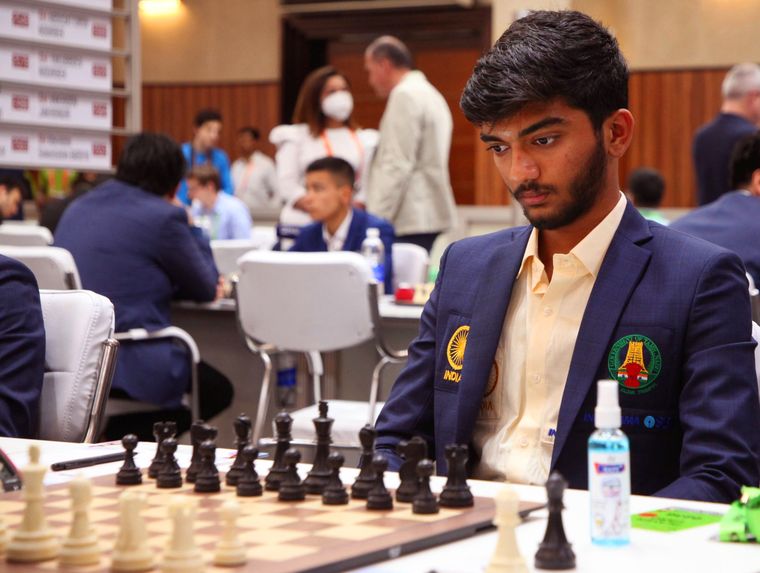 WHEN GRANDMASTER DOMMARAJU Gukesh, 16, beat world number five Fabiano Caruana of the US in the recently concluded Chess Olympiad, he was asked at a post-match press conference: “You seem relaxed, happy, calm and confident—is that part of your personality?” The response from the Chennai boy was a serious “I am not sure,” followed by a thoughtful shrug.

You cannot blame the Indian teen for being economical with words; too much is happening in his world this year. “His evolution has been rapid and progress phenomenal,” Grandmaster and coach R.B. Ramesh told THE WEEK. The boy from Korattur in west Chennai not only helped his team (Team 2) win bronze at the Olympiad, but also won gold on the top board ahead of the Uzbek Nodirbek Abdusattorov and world champion Magnus Carlsen. His eight-match winning streak at the Olympiad has been compared to former world champion Vladimir Kramnik's run at the 1992 edition—he had also won eight in a row. Gukesh beat Caruana, Alexei Shirov and Gabriel Sargissian, and drew with Shakhriyar Mamedyarov. They are all at least 14 years his senior and above him in the FIDE rankings.

Barely a week after the Olympiad, Gukesh was back in action in the Isbank Turkish Super League. Representing the Turkish Airlines Sports Club (THY), he won his first three games against grandmasters Aryan Gholami, Andrey Esipenko and Vahap Sanal. His live rating is now 2726.5, and he is only behind Viswanathan Anand among Indian players. He is also the third youngest player (after Wei Yi and Alireza Firouzja) to reach 2700 in the classical format.

It was no surprise that he went to Turkey so soon after a major event. He had, along with fellow Indian teen Arjun Erigaisi, played a string of tournaments as the Covid-19 lockdowns eased worldwide. They were thirsty for competition. “They just played consecutively without any break. This is very unique to these two,” said Ramesh. “They were relying more on practical strength and confidence.”

Gukesh was seven when his parents—Rajnikanth, an ENT specialist, and Padma, a microbiologist—introduced him to chess. “He became crazy about chess from a very young age,” Padma told THE WEEK. The passion only grew stronger with each passing year, but not at the expense of other interests. According to Padma, he also follows and plays cricket, reads books (mostly biographies of sportspersons), plays badminton and table tennis, and enjoys get-togethers with friends and family during his time off from the board. Padma has one complaint, though: “He is a fussy eater at home, but eats whatever he gets while travelling for competitions.” 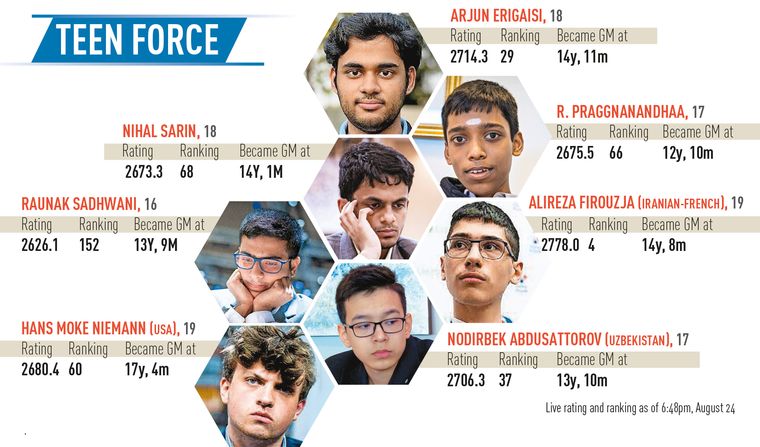 All the credit for Gukesh being grounded despite the recent success goes to his parents. They realised he was serious about chess and did not push him to be studious. Pravin Thipsay, India's third-ever grandmaster, calls them Gukesh's “mentors”. “He is always in a positive frame of mind irrespective of the opponent he is playing,” he told THE WEEK. “He is composed and confident. His parents deserve huge credit for that, especially his father.” Rajnikanth is currently with his son in Turkey (August 16 to 27), ensuring that all of his needs are met.

“A lot is expected of him,” said Thipsay. “He is the youngest among the current lot of emerging players. What is key is that he is improving not by the year or month, but every day. There is a great deal of maturity in his play. Even Anand did not win a gold while playing on the top board in the Olympiad.” Thipsay even said it was “better than any performance by an Indian in an Olympiad”.

He was particularly impressed by Gukesh's game against Caruana. “There were some three or four moves he made that sort of surprised us,” he said. “We had seen Anand doing that when he was 21 or 22.”

GM V. Vishnu Prasanna, who has coached Gukesh since 2017, said he was “very resourceful” against Caruana.

In a recent interview to THE WEEK, Anand described Gukesh as “hardworking and courageous”. “He takes good openings and fights well with anyone,” he had said.

His tenacity is what separates Gukesh from others in the Indian youth brigade that is charging up the ratings. Most experts feel that Gukesh and a few others could touch 2800 in a year.

His hectic schedule, though, has divided the chess fraternity. “[R.] Praggnanandhaa and Nihal Sarin are choosy and selective,” said Ramesh. Thipsay, though, said there was nothing to worry: “[Garry] Kasparov would play six to eight tournaments a year, but [Anatoly] Karpov would compete in over 12. Both were successful. It (workload) has to match the personality of the person.”

Prasanna had recently said that he had “never stopped Gukesh from playing continuously”. However, he did hint during the Olympiad that Gukesh would become more choosy after the Turkish League. “There would not be enough opens for him to play,” he said. “Opens would not make sense after this. So, he would be playing in leagues and whatever invites he gets to closed events.”

Gukesh, for his part, has great clarity on what he wants to do. After becoming a grandmaster at 12, he made it clear that his ultimate goal was to be world champion. “Magnus Carlsen was 22 when he became one,” he had said, “and I will try to get there before him.”

The doubting Thomases may laugh at this dream, but Thipsay is not one of them. “Most of the eventual world champions reached the top 10 by the age of 22 or 23,” he said. “[Gukesh] can get into the top 10 well before he turns 20. There is an excellent chance of him taking aim at the world championships eventually.”