How City Football Group plans to dominate the football world 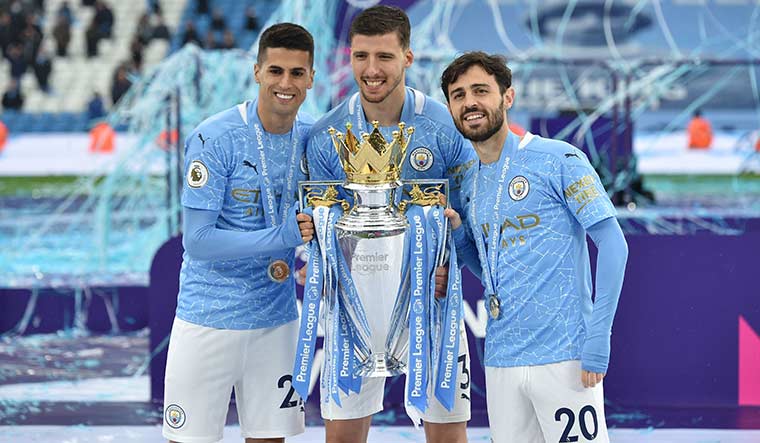 Winning everywhere: Manchester City players with the Premier League trophy in May | AFP

IT WAS A BIG MOVE for Aaron Mooy. In June 2016, the 25-year-old Australian midfielder joined Manchester City after two stellar seasons with its sister club, Melbourne City. “Aaron is an extremely talented player who possesses the attributes we hope to foster and encourage within the City Football Group,” said Brian Marwood, managing director, City Football Services, in a statement released by Melbourne City. Marwood, who is now managing director of global football, City Football Group (CFG), had added that Mooy’s move to Manchester would help “ensure his professional growth”.

In Manchester, however, there was little to no interest in Mooy. And, understandably so. It was the same season in which Pep Guardiola finally took the Manchester City job, after years of being wooed. The club reportedly spent over £190 million to modify an already world-class squad to Guardiola’s specifications. This included signing John Stones, Leroy Sane, Gabriel Jesus and Ilkay Gundogan. Rivals Manchester United brought in the likes of Zlatan Ibrahimovic and Paul Pogba, the latter for a world-record fee.

Mooy, virtually unknown to fans, was almost immediately loaned out to Huddersfield Town in the English second division. He had a brilliant season, and helped Huddersfield gain promotion to the Premier League for the first time ever. This prompted the club to sign Mooy on a permanent deal; the fee was reportedly around £8 million. Mooy never played for Manchester City. But, the transfer fee the CFG pocketed from his sale was more than what the group had spent to buy Melbourne City in 2014.

However, this seemingly profitable transaction is the exception rather than the trend. The CFG, owned by Sheikh Mansour bin Zayed Al Nahyan’s Abu Dhabi United Group (77 per cent), the China Media Capital Consortium (13 per cent) and Silver Lake (10 per cent), is in for the long haul. So, even as the group continues to operate at massive losses, there is no dilution of its grand ambition.

It currently runs 10 clubs and has partnerships with two clubs (see graphics). The plan is to find the best young players from across the world, develop them and then ‘promote’ them to the bigger clubs within the group or sell them (for example, Mooy). But even when sold, the player stands to benefit immensely from being in the CFG ecosystem. This could be a path to the top leagues for players (hopefully, Indian players, too) who may otherwise have gone undiscovered by European clubs. This system would, in theory, ensure a smooth supply of talented players for the group’s flagship—Manchester City—as it seeks to become the world’s greatest football club. 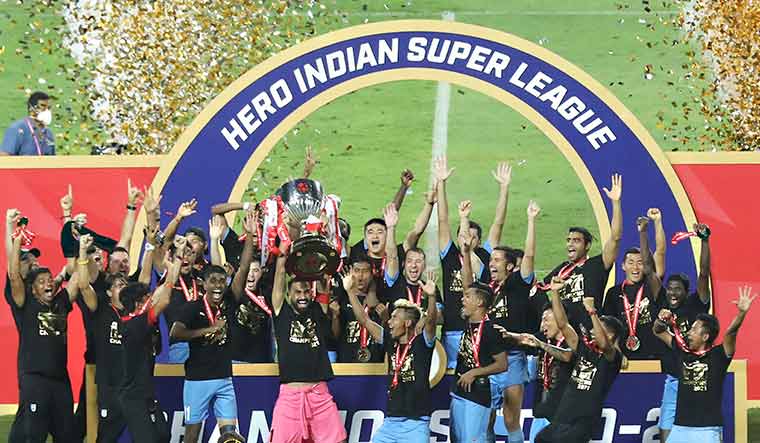 Key to this vision is creating a football ideology that can be followed at all CFG clubs to deliver an exciting and forward playing game. This is a part of Guardiola’s job at Manchester City—creating an entertaining style of football that would become synonymous with the City brand. Clubs and academies across the world would try to implement this style, meaning that in the future, players would be able to adapt to playing for different teams in the group with relative ease. There is no doubt that in places like New York, Melbourne or Mumbai, the quality of football will be lower, at least in the medium-term, compared with England and Spain. But, the attempt is to make the philosophy consistent.

Winning trophies is understood to be a basic requirement. And CFG has done well on that count. Senior teams of clubs under CFG have won 39 trophies, including lower division leagues and minor trophies, since 2008, when CFG personnel took over Manchester City (CFG was formally formed only in 2013 as the group started adding more clubs to its portfolio). This haul comprises 26 trophies in the men’s game and 13 in the women’s game. Reigning league champions in the CFG are Manchester City, Melbourne City, Troyes (French second division) and Mumbai City.

Mumbai City won the Indian Super League in its first full season under CFG, thanks to sweeping changes. The group recruited coach Sergio Lobera from FC Goa. Lobera was briefly assistant manager to Tito Vilanova at Barcelona and is a known proponent of the Guardiola way. And, at Goa, he had shown that he could make it, or a modified version of it, work in India. In Mumbai, he emphasised on trying to play that style of football—now the City way. 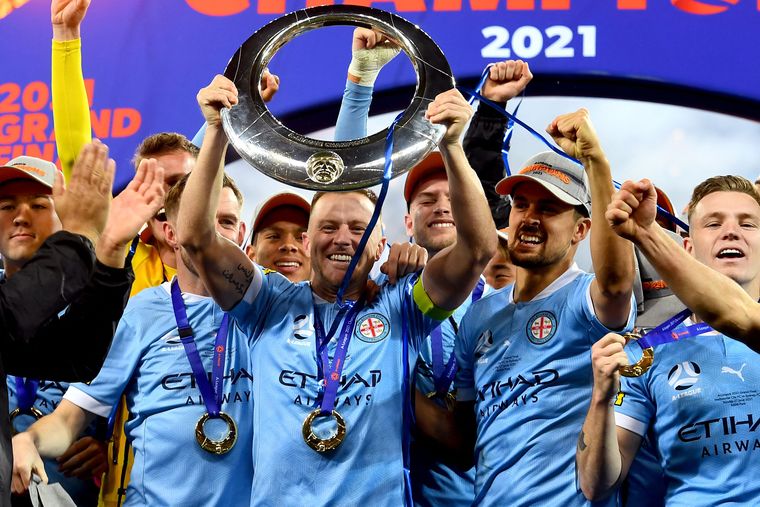 To help Lobera do that, Mumbai City signed Hugo Boumous—player of the season in the previous edition of the ISL—from Goa. The reported fee was around Rs1.5crore. According to reputed football news website transfermarkt.co.in, it was more than the total of transfer fees Mumbai City has paid since the inception of the ISL. As per the website, Mumbai has already broken this record by shelling out around Rs1.9 crore on recent signing Lalengmawia “Apuia” Ralte, from North East United.

Striker Adam Le Fondre, who was the team’s top scorer with 11 goals in the 2020-2021 season, has said that the City brand was a prominent reason behind his one-year loan move from Sydney; he felt that a CFG club would be “more professional, have the best coach..., facilities”. Though Le Fondre had been in sensational form, the club also wanted an experienced striker who was more familiar with Indian conditions. Quite remarkably, it managed to bring in Bartholomew Ogbeche, who had starred for Kerala Blasters and North East United in the two previous seasons, not as the star man, but to enhance squad strength.

CFG’s work with Mumbai City highlighted the group’s ability to transform its teams in a short span of time. This has been consistent despite CFG’s presence in regions with vastly different football cultures and heritage, such as Europe, South America and Asia. CFG’s former India CEO Damian Willoughby, who left the group in July, told THE WEEK that the consistency is a result of the multi-club model where methodology, learnings and experience are shared to benefit all teams. “[The group] has a range of experts who work across all areas of sporting performance,” he said. 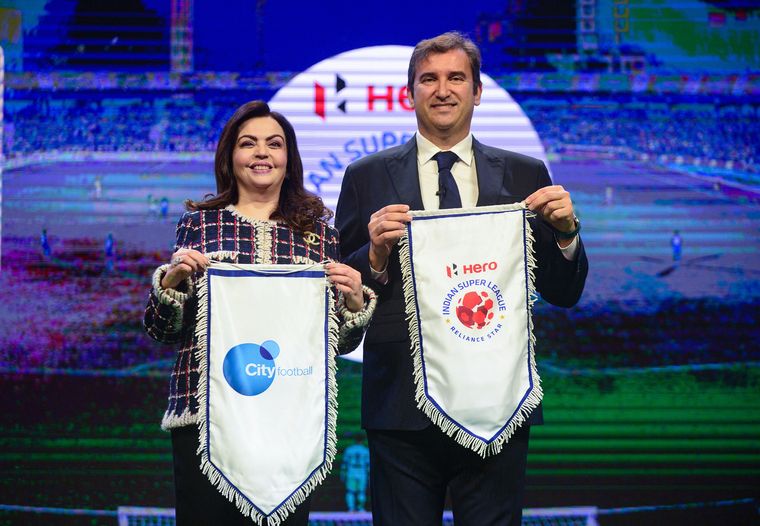 Mumbai is not one of the football hotbeds in cricket-crazy India and was perhaps an odd choice for CFG’s entry into India. But Willoughby explained that the group looks at a wide range of considerations before investing in a team. “Mumbai is one of the world’s truly great cities,” he said. He added that there was enormous potential to develop the team and participate in the growth of football in India. “Wide range of considerations” and “enormous potential” may be acknowledgements of the huge untapped market in India.

The country already has a significant number of people who consume European football. If CFG is able to transform Mumbai City into a team which plays good football while consistently challenging for national and continental titles, it will help the City brand immensely and in turn generate more interest in Manchester City, at least among those Indians who have not already declared support for one of its English or European rivals. The same principle applies with respect to CFG’s ventures into other relatively untapped markets.

The only hiccup in CFG’s operations so far has been that Manchester City, despite its meteoric rise in the football world, has been unable to win a European title. (It lost the final to Chelsea last season.) This is a major disappointment, especially because City have spent an incredulous £1.92 billion (over Rs19,000 crore) on transfer fees since 2008, including the £100 million signing of Jack Grealish in August. 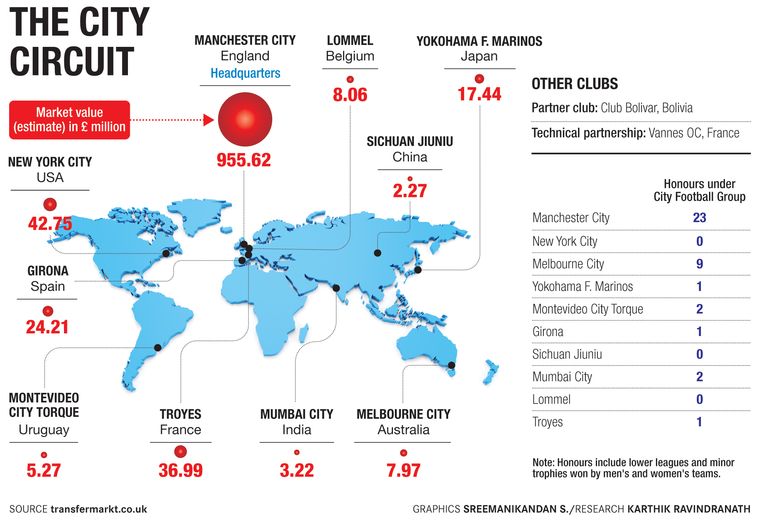 The signing of the talented Grealish, for the biggest fee ever paid by a British club, is noteworthy considering that the team did not lack good options in his role. Grealish has predominantly played off the left in recent years. At his new team, he would be competing with Raheem Sterling for a starting berth. The likes of Phil Foden and Ferran Torres are also capable of playing on both wings. In short, City spent £100 million to enhance squad strength. It was a stark statement of its intent ahead of the 2021-2022 season which began on August 14. It is also interested in signing Harry Kane, whose price tag would be higher than Grealish’s.

Apart from the spending on the squad, the club has also invested heavily in infrastructure and youth development. The new youth setup has already produced at least two potentially world-class players in Foden and Jadon Sancho, who recently signed for Manchester United. The eventual target is to emulate Barcelona’s youth academy—La Masia—which has produced legends such as Lionel Messi, Andreas Iniesta, Xavi, Carles Puyol and Guardiola himself. The man who conceptualised CFG’s global empire, CEO Ferran Soriano, a former Barcelona employee, has said that the group is “globalising the Barca model”. Ironically, the club on which Soriano based his blueprint seems to have fallen on hard times, even as Manchester City strives to emulate it.

In the context of the inflation in the transfer market, Soriano told The Guardian in 2017 (the year of Neymar’s world-record-breaking transfer): “This is a typical ‘make-or-buy’ challenge. You can’t buy in the market, so you have to make. This means spending a lot of money—on academies, coaches, but also in transfers for young players. It’s like venture capital in that if you invest 10 million each in 10 players, you just need one to get to the top who is going to be worth 100 million.”

The group’s aggressive transfer strategy with regards to signing young players and massive spending has come in for scrutiny on many occasions. Manchester City has been fined for flouting the UEFA’s financial fair play rules and there has been criticism for taking “hidden state aid” in the form of sponsorship contracts from public companies in Abu Dhabi. The Australian league even changed its transfer policies to level the playing field. There are also concerns regarding human rights issues in Abu Dhabi. But, despite all challenges, the CFG juggernaut has continued to roll on. In 2019, the group was valued at $4.8 billion (around Rs35,000 crore).

In July, CFG borrowed $650 million (around Rs4,800 crore) to invest in its clubs. This money is expected to go towards infrastructure, especially a new stadium for New York City. There is a glimmer of hope for India, too, as Willoughby revealed that the group wanted to build and develop its presence in the country and was working on a range of proposals that would keep it busy “in the months and years ahead”.