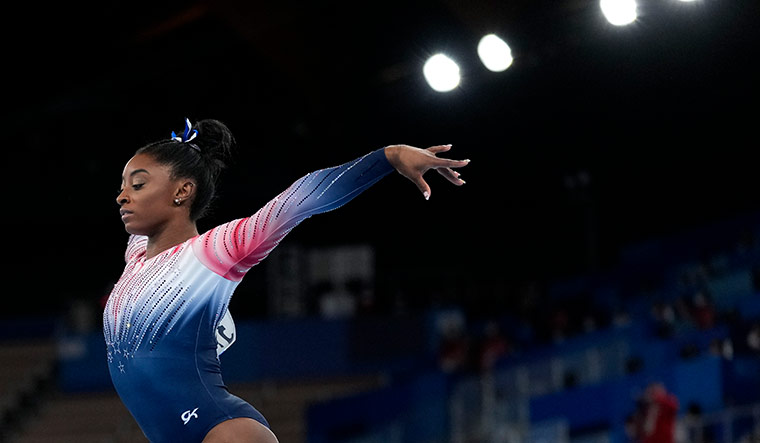 Bold is gold: US gymnast Simone Biles made the loudest statement by just walking away | AP

On July 27, after a sub-par vault by her standards, Simone Biles knew her mind was not playing along. She had a decision to make. Either persevere like she had always done—she had previously won events for her country with broken toes and a kidney stone—or step aside and let her teammates pursue gold. She chose the latter.

For all the emotional turmoil she was going through, Biles was quite pragmatic at the press conference later in the day. She said she knew “mental’s not there” and she did not want to “risk the team a medal because of her screw-ups”.

“Biles admitted to getting a ‘bit of the twisties’,” says Dr Swaroop Savanur, mental conditioning and peak performance coach with the Punjab Kings IPL team. “This is when the build-up of pressure becomes so intense that the player has a biophysical manifestation of that stress and there is an interruption in the signals that the brain sends to the muscles; this results in a lack of muscular coordination. In gymnastics, even a small delayed reaction can have disastrous consequences. And when that plays in your mind, there is no way a gymnast can pull off a performance at that level.”

There is another harmless-sounding term called the ‘yips’ in golf. “It’s a similar physical reaction to pressure,” says Savanur, “and the player cannot even hold the golf club.” But, if Rory Mcllroy has the yips and still plays, he might miss a putt; if Biles springs off the vault with a muddled mind, she could break her spine.

To understand what Biles is going through, it is crucial to differentiate between mental health issues and the general pressure of performing under bright lights. “Game stress is just one factor leading to depression, insomnia etc,” says Savanur. “Every athlete will feel [performance anxiety] and could fail because of it, but that doesn’t mean he or she has a mental health issue. It is dangerous if this clarity is not there.”

“Choking” might be part of it, but the issues athletes like Biles have, or are facing, builds up over years. Biles, specifically, has had a tough life. In a 2019 interview with actor Priyanka Chopra Jonas—after news of team doctor Larry Nassar having sexually abused her and many others broke—Biles said, “I was sleeping all the time because it’s the closest thing to death.”

“It is likely that Simone is dealing with post-traumatic stress disorder owing to the sexual abuse she has had to endure,” says Singapore-based sports psychologist Sanjana Kiran, who has worked with nearly 200 Olympians through four Olympic cycles. “Elite athletes experiencing intense trauma find refuge by immersing themselves into their craft, almost robotically, as a coping mechanism to sustain their self-worth that has been tarnished by the abuser/s. However, intrusive memories of the traumatic incidents can be triggered by competition anxiety, which affect the ability to maintain mental poise. Fortunately for Simone, she recognised the ‘twisties’ and made the right decision.”

In stepping away, Biles had taken a cue from Naomi Osaka; the tennis star had withdrawn from this year’s French Open and Wimbledon citing mental health. Three years earlier, at what was supposed to be her moment of glory, Osaka was viciously booed by the crowd because she beat Serena Williams in the US Open final. Since then, Osaka has been open about suffering long bouts of depression and reluctantly became the face of sports and mental health. Now she has company. 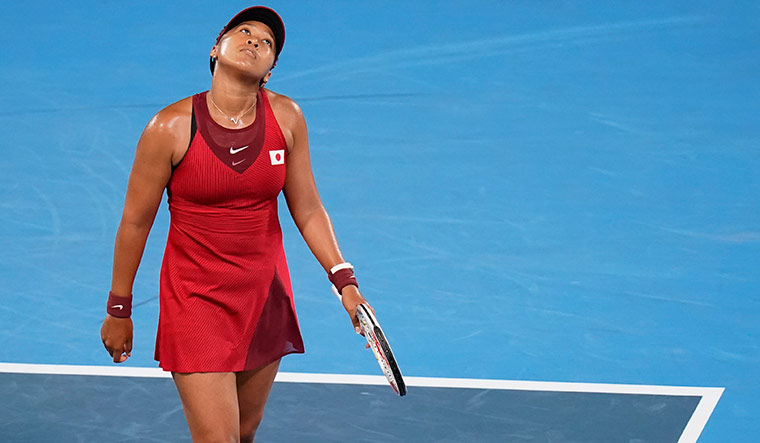 Not alone: Tennis star Naomi Osaka reluctantly became the face of sports and mental health. Now she has company | AP

According to a study published in BMJ in 2019, about one in three elite athletes suffers from anxiety or depression. In recent years, superstars such as Michael Phelps—the winningest Olympian by a fair margin—have talked about their troubles openly. For him, it wasn’t the pressure of the pool, but life outside the water that got to him. After the 2012 London Olympics, Phelps told CNN, “I didn’t want to be in the sport anymore... I didn’t want to be alive anymore.”

Abhinav Bindra, the only Indian with an individual Olympic gold, went through similar lows after the greatest win of his life. “You know, it’s pretty ironic that my biggest mental crisis in my life came when I actually succeeded,” he said about facing depression, in a YouTube show called Mind Matters.

Virat Kohli, the captain of the Indian men’s cricket team, also spoke about feeling lost following his woeful tour of England in 2014. He said he felt “like the loneliest guy in the world” and that it “seemed like the end of the world”. He later spoke to Sachin Tendulkar, who himself faced anxiety for almost half of his 24-year international career.

Yet, it is only now, when Biles made the loudest statement by just walking away, that the sports world is intensely debating the subject. This is primarily because she spoke up while in action. It is also, in part, because of the pandemic. “Generally, most elite athletes are unable to recognise the signs and symptoms that tell them they are not okay,” says Kiran. “The lockdowns forced them to pause their hectic lives and analyse their self-worth outside of an athletic identity.”

But just because mental health is being talked about doesn’t mean the discussion is empathetic or even civil. For all the tweets in support of Biles and Osaka, there were accusations, too. They were called soft, scared and, in Biles’s case, “a national embarrassment”. Mixed within those sexist and racist rants were questions about the legitimacy of the athlete’s concerns. After all, there was no sling or crutch; Biles was all smiles as she cheered on her teammates from the side-lines. “The traditional belief is that an elite sportsperson can’t be mentally weak; the belief that anything to do with the mind of an athlete is performance-related breeds scepticism,” says Kiran. “Athletes feel the need to ‘prove’ [that they are struggling mentally] and it doesn’t help with their situation as that is an uphill task in itself.”

That a Biles or an Osaka laid bare their concerns is also telling of another stigma in the sporting world. “Men find it hard to accept that they experience mental issues,” former Indian cricketer Robin Uthappa said in a webinar last year. The batsman had battled clinical depression and said that he would sit in his room and think of jumping off the balcony on the count of three. “I know so many guys going through difficulties in our fraternity,” he said, “so many guys who are not willing to accept that they are going through difficulties.”

Both Savanur and Kiran agree that women tend to be more open about mental health and seeking help. “We [in India] still have a long way to go towards basic awareness about providing the right ecosystem that will allow athletes to start training mentally without any prejudice,” says Savanur. Adds Kiran: “Some parts of the sports ecosystem in India seem to be pretty active with these conversations. That is a good first step. In terms of expecting a top [Indian] star to do what Biles did, perhaps not in the immediate future.”

Globally, though, could the Biles episode be a watershed moment in sports? After all, within days of Biles’s announcement, English cricketer Ben Stokes took an indefinite leave from the field to focus on his mental health.

“Absolutely,” says Kiran. “Stepping away from an Olympics for one of the most bejewelled athletes is no small feat. In doing so, Simone has given more steam to the athlete’s mental health conversations. However, it remains to see if she was only heard, or listened to as well.” Savanur, though, is not as optimistic. “We have to be a bit objective about it. Biles’s decision was also a safety issue. But, yes, the awareness that the player’s mental health should be an equally important consideration is a welcome fallout of it. How it really pans out practically remains to be seen.”

On August 3, Biles returned to action—two days after her aunt died unexpectedly—to win bronze in the balance beam final. “After the team final, we went to the village, and honestly I expected to feel a bit embarrassed,” she said on August 3. “[Athletes] were coming up to me saying how much I meant to them; how much I had done for their world. That was the craziest feeling ever. In that moment, I was like, ‘There’s more than gymnastics and medals.’”Biles was expected to leave Tokyo as the best gymnast of all time. She will now do so as perhaps the most important.