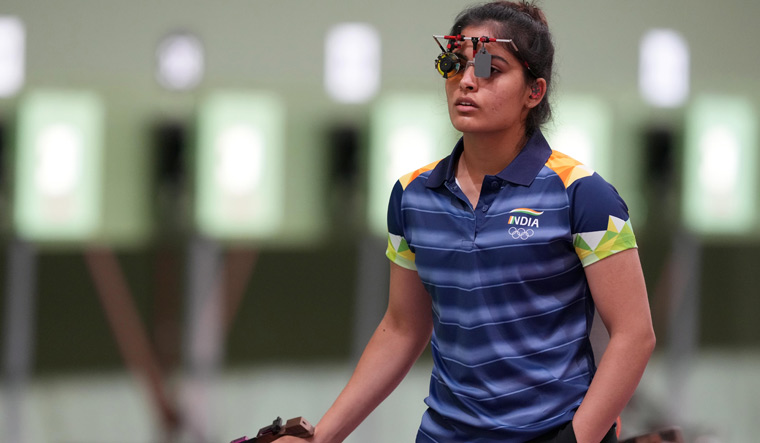 Covid-19 cut people off from each other. For Indian shooters, their performance in the opening days of the Tokyo Olympics put even more distance between themselves as the pistol and rifle shooters failed to live up to their reputation and ranking. The Indian camp had turned quiet, each shooter retreating into a shell. Those with events yet to go had to focus on what lay ahead; the rest were left to mull what went wrong.

Despite the team consistently featuring on podiums in most events over the last five years, that they drew a blank at the Olympics came as a rude shock. The men’s, women’s and mixed event shooters in both 10m air pistol and 10m air rifle got India into just one final—19-year-old Saurabh Chaudhary in 10m air pistol, where he finished seventh. He then combined strongly with Manu Bhaker, as expected, to top the first qualification round in the mixed event with a score of 586 out of 600, showing glimpses of the form that won them four World Cup gold medals. But the duo fell short of the medals rounds in the second stage. At the other events, the Indian shooters fell like ninepins.

Chaudhary and Bhaker were India’s best hopes, followed by the 10m air rifle and pistol mixed teams. While Chaudhary stood out as the lone star who began his Olympic journey on the right note—he topped the qualification table—Bhaker had a pistol malfunction in her singles event.

As questions of the shooting team’s ability arose, Abhinav Bindra, the 2008 Olympics gold medallist in 10m air rifle, told THE WEEK, “It just goes to show we are an emotional nation. The more the sport gets popular, the more the emotional reaction,” he said. “But yes, there has to be dissection of the performance. We cannot be emotional in that.” On the team’s performance, halfway through the shooting schedule, Bindra said, “I am disappointed as a fan. But in sport, nothing can be scripted. You need to continuously adapt to situations.”

The no-medal show in the first and most crucial days left Raninder Singh, president of the National Rifle Association of India, stunned. “What can I say, they shot well below their standard; succumbed under pressure I guess,” Singh told THE WEEK. “We thought we had mentored them enough and that they were in the Olympic zone. Clearly, they were not.”

The warning signs came over the last few months. The young shooting squad—most of them under 21—was taken to Croatia by the NRAI for 80 days before flying to Tokyo. Zagreb became their training base and the shooters got much-needed competitive action by participating in the European Championships and the World Cup in Osijek. But they did not look up to the mark.

“Prior to the Croatia camp, not much information was coming through from the Indian team,” said Joydeep Karmakar, former air rifle shooter who finished fourth in London 2012. “At the European Championships, they did OK. Their performance in Osijek was not good at all. I thought maybe the coaches were not keen on shooters peaking prior to the Olympics, but now I feel they were clearly struggling.”

At Osijek, world no 1 Panwar, Valarivan, Kumar and former world no 1 Chandela had scores that were not good enough for the Olympics. Both Chandela and her fellow 10m air rifle shooter Anjum Moudgil lost form during the pandemic, and Kumar suffered from long Covid.

The 18-year-old Panwar’s form reportedly dipped due to a judgment error by coaches. They changed the trigger of his weapon ahead of the Osijek World Cup, and he ended up shooting below his usual scores of 630s. He was made to do holding exercises with his gun the night before his competition. After some stern words from Raninder Singh, the old trigger was restored but that mess-up proved costly in Tokyo. Meanwhile, reports of national coach Deepali Deshpande not allowing a foreign coach to work with Moudgil also emerged.

Karmakar felt the decision of the NRAI to announce the Olympic squad early shut the door on changes. While that may be debatable, he reiterated that the preparation for the Olympics has to be different than what it is for World Cups, Commonwealth Games or Asian Games.

Bindra concurs with his former teammate. “Every Olympics is an adventure, a roller coaster ride,” he said. “Winning medals at the Olympics is not like putting coins in a vending machine and getting Coca-Cola cans out. You will meet with both failure and success, [and you] need to keep building on it.” 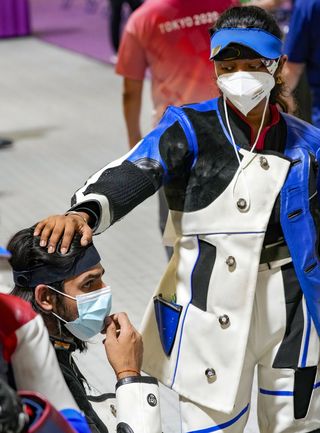 Singh blamed a few individual coaches for ruining India’s medal chances. In June, he had read the riot act to all pistol coaches, asking them to pull up their socks. Guns are now being trained at former Indian pistol stalwart Jaspal Rana, who groomed Manu Bhaker from the junior ranks but parted ways with her before the Olympics. Singh is fine with the selection process and does not believe the shooters are too young. “They are seniors now. Age is not a factor [for poor performance]. Frankly speaking, it will be the same squad mostly, with a few changes, for Paris 2024. But yes, one area where we can do more is mental conditioning,” he said.

Speaking to THE WEEK from Tokyo, pistol coach Ronak Pandit said: “Saurabh did brilliantly. It is unfortunate that he could not get enough support from Manu in the mixed team event, but I do not think he is lacking in anything. He was well prepared.”

The Rana-Bhaker split has been the talk of the shooting camp. There was alleged conflict of interest as Rana was pistol coach with the Madhya Pradesh shooting academy, and he pushed for his ward Chinki Yadav—New Delhi World Cup gold medal winner in 25m air pistol—to be included in the event instead of Bhaker. “I have done what I could do—gave him charge of juniors and backed him for the Dronacharya Award. But when he asked me to overlook merit, I could not,” said Singh.

Such was the falling out between Rana and Bhaker that on the last day of the Delhi World Cup, the coach reportedly wore a T-shirt that had messages he received from an agitated Bhaker scribbled on it. “It damaged his reputation as a coach and damaged the athlete,” said Singh. “Manu had a fantastic qualification. She is a sensitive girl who needs to be handled with kid gloves during the event.”

Singh brought in Pandit to coach Bhaker leading up to the Olympics. Pandit was to start training with her in April but he could only join her in Croatia in June. “I do not think her previous coach stood by her,” Pandit told THE WEEK. “In spite of the time shortage caused by her pistol malfunction, she needed only an inner 10 to qualify. She could not, but her performance was still heroic. I was told she had anger issues but I did not find it so.” Pandit was aghast to learn that she had been taught to focus on “parameters not in her control rather than those she could control”. THE WEEK tried to reach out to Rana, but got no response.

Bhaker felt a little lost in Croatia without her individual coach and without the luxury that comes with being “Rana’s wards”. “She confided in me her issues and insecurities,” said Pandit. “She had too much to deal with going into the Olympics and she is just 19.” Pandit added that whatever issues pistol coaches had in Croatia, “they ensured it did not affect the shooters”.

Karmakar pointed out that there is no communication between athletes’ individual coaches and national coaches. “And, the individual coaches are totally cut off from the wards when they are in national camp,” said Karmakar. There should be a system where all of them work seamlessly together, he said. He also underlined the need for a high-performance director who would work in tandem with all coaches.

Bindra says that they have to figure out what works best for India. “One cannot copy-paste other systems,” he said. “China has a very strict system, the USA has its collegiate system, which is a tremendous success. Germany is based on club culture, where national coaches work with club coaches.”

The shooters have got all the financial and other support requested by them from the Sports Authority of India and Target Olympic Podium Scheme. There is a view that perhaps Indian shooters are mollycoddled, leading to poor results in the Olympics. Singh believes it is not the federation that does it. “Maybe they are, but by their coaches!” he said.

Bindra denounces this attitude. “You have to support your athletes but there has to be some accountability that comes from understanding how they went about preparing,” he said.