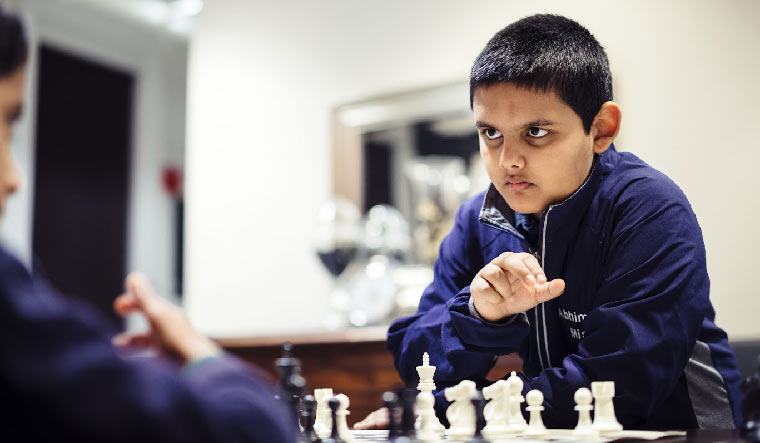 Abhimanyu’s ability to grasp the seriousness of any situation is his forte | St Louis Chess Club, Missouri/Austin Fuller

THE MILITARY SYMBOLISM of the pieces on a chess board is hard to miss. Before the Europeans tweaked the pieces to reflect their social order, chess, in its early years, was a game of war using purely military units. But while war is loud, brutal and erratic, chess is quiet, logical and safe. The battle is restricted to the players’ minds.

Nevertheless, Hemant Mishra wants to revive the original metaphor. “It is a war, for all practical purposes,” he says as he sits down for a chat over Zoom. He is talking about the long hours of rigorous training that his son, Abhimanyu, is undergoing to become the youngest chess grandmaster (GM) ever. The 12-year-old from New Jersey has already earned two GM norms. He has until September 5 to collect his final norm and break the record of 12 years and seven months set by Sergey Karjakin in 2002.

The path to rewriting history is a painful one. Abhimanyu trains for 10 to 12 hours a day, as against the four to six hours that others his age spend on chess. It helped him become the world’s youngest international master in November 2019, beating the record set by R. Praggnanandhaa. At the time, Abhimanyu had a cool 22 months to crush Karjakin’s GM mark. But to his dismay, he lost 14 of those months to the pandemic. Though there were online events, GM norms can be earned only on over-the-board events. Hemant promised him to take him to wherever events were held as soon as things opened up. And that is what they did.

On April 12, the father and son left the US on a one-way ticket to Budapest, one of the few places offering frequent GM-norm tournaments. With Covid still looming, they left nothing to chance. They packed bedsheets, pillow covers and even comforters. At every hotel room, Hemant would strip off the sheets and thoroughly disinfect the room. While travelling around the US for events, Abhimanyu’s doting mother, Swati, would pack all their meals. The home-cooked food is what they miss the most now, having spent nearly two months on the road.

“Covid stopped me for 14 months, but it can’t stop me forever. We’re here to break it (the record),” Abhimanyu says. He won his first two GM norms in quick succession by early May. There are days he feels down and defeats hurt, but he understands and trusts the process. “Yes, it is painful. But no one reaches the top without pain,” he says, his rationality belying his years.

Abhimanyu’s ability to grasp the seriousness of any situation is his forte. Swati says that he seeks a logical explanation for things he is asked to do. She recalls the time when a four-year-old “Abhi” had become an elder brother. He had developed a cold and was asked not to go near his mama or little sister as she would fall ill. Obediently, he stayed away from their room for a whole week. “I often think about how a four-year-old could understand that he might transfer his illness to a baby. He took care of that,” said Swati. 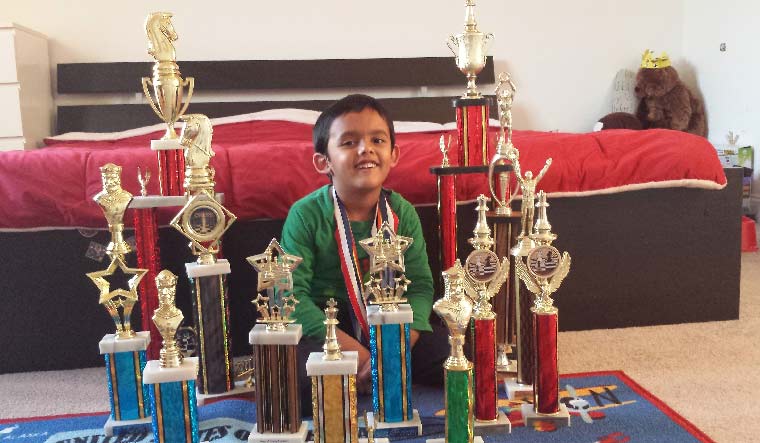 The Mishras are from Bhopal and have lived in the US for the last 14 years; both work for software firm Commvault Systems. Hemant played chess in college and in corporate events. To prevent his son from drowning in a sea of devices like other kids, Hemant introduced Abhimanyu to the game at the age of two. Swati shares a video in which the two-and-a-half-year-old happily sets up the pieces on a chess board. Toys are strewn around the room and his babbling is barely intelligible, but with an unwavering focus, he sets up the board ready to play, as a proud father urges him on from behind the camera.

It is this steely resolve and focus that he has taken him places over the last decade. His coach GM Arun Prasad was surprised by this quality when he first met him. “Here I had a six-year-old boy who would sit straight for two-hour sessions and have the same enthusiasm even at the end of the class,” said Prasad. “He was like a sponge, absorbing information. In our fourth of fifth class, I gave him something extremely advanced, thinking let me see what he would do. And he understood even that! That is when I knew this kid is going to achieve great things.”

Swati describes Abhimanyu as a “sweet and gentle boy” who works harder than anybody she has seen all her life. But the gentleness stays off the board. His game is aggressive and his peers have noted that he does not back away from a challenge. Lost in the moment, he wears a scowl every time he plays—which scares his mother—and opponents often complain that he stares at them.

“It is true, he has been an offensive player, but that is starting to change,” said Prasad. “He is trying to become a universal player at such a young age. If [Garry] Kasparov was an attacking player and [Magnus] Carlsen is generally a positional player, future chess stars will be universal players. Abhi has realised that at 12. Even before becoming a GM, he is expanding his knowledge base and has learnt new opening moves that people pick up much later.”

The aggressive approach has often proved costly leading to defeats, and Hemant does not tolerate such mistakes. In the Mishra household, working hard and working smart must go hand in hand. Hemant believes that chess’s cause-effect nature is very close to life. Abhimanyu concurs. “The game is very important in my life,” he says. “I’m sure it will help me take better decisions in my life later, too.” 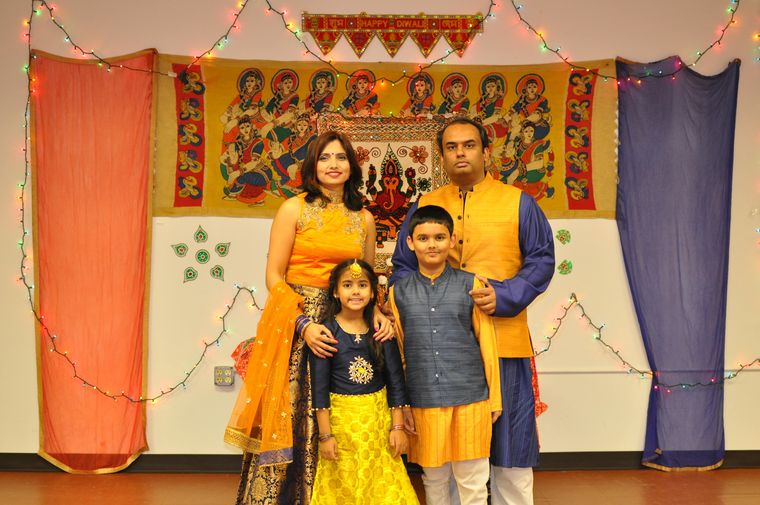 The Mishras at a local cultural event in New Jersey.

Hemant chose to go it the “Indian way” of taking tough calls for his son. He accepts that the American way of letting kids make their own choices in life might work for them, but not for him. “When you give a kid two options, either to go out and play with friends or to work on chess for 8-9 hours a day, they will not always pick the second option,” said Hemant. “That is where I prefer the Indian way of doing things where parents take control of the situation and take the best decisions.”

This is sure to bring up concerns of helicopter parenting, of which there are no dearth of examples in India. GM R.B. Ramesh, coach to numerous chess prodigies from Chennai, is of the opinion that inordinate external pressure on a child, without proper assessment of their capabilities, could impact their confidence and lead to long-term problems. But cases like Abhimanyu, Ramesh agrees, are exceptions, where the child’s drive to succeed matches—even exceeds—that of others around him.

“You will find many kids like this across generations, but only about 10 in a particular generation,” said Ramesh. “For them, this will not be any pressure, but rather an exciting journey. I still see the excitement with which Praggnanandhaa plays his games. They have the capabilities to produce results. For others, they just have to revise their targets.”

In an age when it is has become commonplace even for pre-teens to reach the upper echelons of the chess world, Abhimanyu’s mission to become a truly universal player is in keeping with what chess experts expect the future chess player to be. According to Prasad, reigning champion Magnus Carlsen might just be the last person to dominate chess, because of how competitive the sport is about to get.

“To be good at one [strategy] you have to learn X, and to be good another you have to learn Y. But nowadays, the game demands X plus Y,” said Ramesh. “This means more investment of time and effort. The earlier you start, the more receptive the mind is to acquiring new knowledge. But this means these kids will probably retire by 40.” Ramesh says gone are the days when competitive chess players would play into their eighties.

Ever since Garry Kasparov lost to an IBM machine in 1997, artificial intelligence has gone from being reviled by chess players for ruining the game for them, to being the best trainer. The pursuit of chess greatness is by trying to replicate the cold, hard logic of a computer. The elimination of emotion and subjectivity, impossible as it sounds, is the means to the end. That is akin to what Hemant wants from his son. Like the obsessive chess legend of the 1920s, Alexander Alekhine, who once joked that he killed a tramp who repeatedly beat him in exactly nine moves, Hemant and Abhimanyu are aware of the need to be merciless in hunting down records.

It is a self-financed expedition with no corporate sponsors. Unlike Karjakin, who had the backing of Russian schools of excellence and an environment to work with greats of the game, Abhimanyu is on his own. Hemant has invested over $2,70,000 (approx. Rs2 crore) on Abhimanyu’s chess career, but has no regrets. “I used up all my savings, but this is a once-in-a-lifetime opportunity, so let him go live his life,” he said. “As long as he works hard, we should go all the way.” He has launched a fundraiser on GoFundMe to cover trip expenses, hoping that lovers of the game will pitch in to help the boy on his quest.

Back in New Jersey, Swati goes about her day as usual as her son battles it out in the First Saturday event in Hungary. She does not watch his games as she does not follow chess and does not want to “jinx it”. But she says she is more affected by Abhimanyu’s losses than he is. His seven-year-old sister, Ridhima, shares her brother’s obsession with chess, and wants to break records in the women’s game. She played her first tournament before the onset of the pandemic restricted her to online events.

Among his other goals in life, Abhimanyu wants to earn a black belt in karate. The physical toll that the game of chess takes on a player is grossly understated, and so his interest in karate is also to a logical end as it helps him stay fit.

His mother misses him and wants them to return home as soon as possible. “I’ll try,” Abhimanyu tells his mother. “After I get the GM title, I am going to take two weeks off and have fun and not really worry about chess,” he tells me. But the break is sure to be short-lived. For, the next targets will be set by then: youngest super GM, youngest world champion… you name it. When he was six, Abhimanyu told Chess Life, “Every game I play, I literally feel like a king and feel the thrill of a live battle.” This battle may be soon won, but the war will go on.