A Manic Monday at Wimbledon

Snagging a ticket to Centre Court is easier than you think 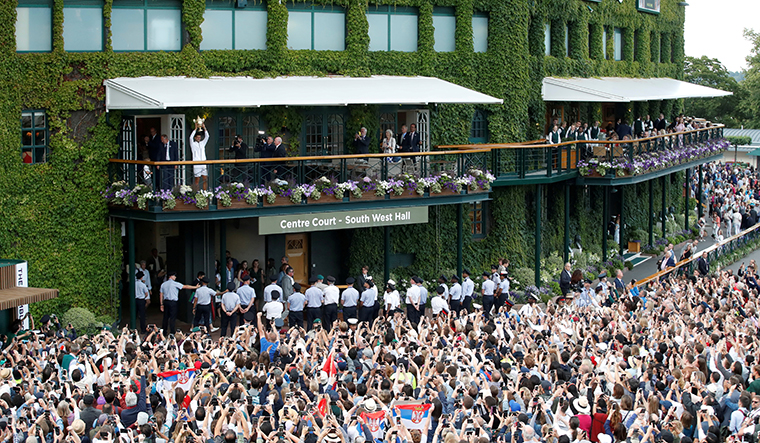 Evergreen tradition: Novak Djokovic lifting the trophy on a balcony at the South West Hall | Reuters

An ardent tennis fan, I often dreamed of eating strawberries and cream while watching my favourite player, Rafael Nadal, live in action on Centre Court. But these were always fleeting thoughts; I never attempted to attend the tournament or check for tickets. I had heard stories about the famous queue, where people camped outside overnight to be the first in line for tickets sold in the morning for that day’s play, and about astronomical prices people paid for tickets to the semifinals and finals.

On December 1, I received an email from a tennis-mad friend saying that Wimbledon’s public ballot for overseas applicants had opened that day, so to quickly send in my application. I wasted no time in registering with the Wimbledon website, and sent an online application for tickets for the 2019 tournament. It took all of two minutes to fill in the form and send it, and the same amount of time to forget about it. After all, I had never been lucky at lucky dips or draws; I had never even won a single line at Tombola, forget about a full house.

Evidently, my luck was reserved for better things. On January 29, I received an email from Wimbledon, saying they were pleased to offer me two tickets to the championships, on Monday, July 8, for Centre Court at a cost of £260. Would I be interested? If I was, I had a month to decide and pay. Needless to say, I didn’t need a single minute. I whisked out my credit card, swiftly typed in the details and cemented the deal. About the small matter of getting myself to Wimbledon? Oh, I had more than five months to figure that out.

Any Wimbledon fan worth her salt knows that the second Monday of the tournament, called Manic Monday, is one of the best days to attend. The last 16 players, in both the men’s and ladies’ draws, play on that day; hence you are rest assured of seeing a few stars, and a couple of decent matches.

On the morning of July 8, I found myself at the entry gates of Centre Court at the All England Club, the home of the championships. Heart beating wildly, I showed my confirmation email and ID to a security guard, and was let in. The grounds instantly took my breath away. The club aspires to “present tennis in an English garden”. Shades of purple, green and white—Wimbledon colours—were everywhere. The prettiest purple hydrangeas sat in the greenest hedges, ivy covered the sides of the great court, and boxes of purple and white petunias surrounded its walls. Purple, pink and violet orchids were artistically put together in elaborate arrangements or in small round vases on cafe tables. 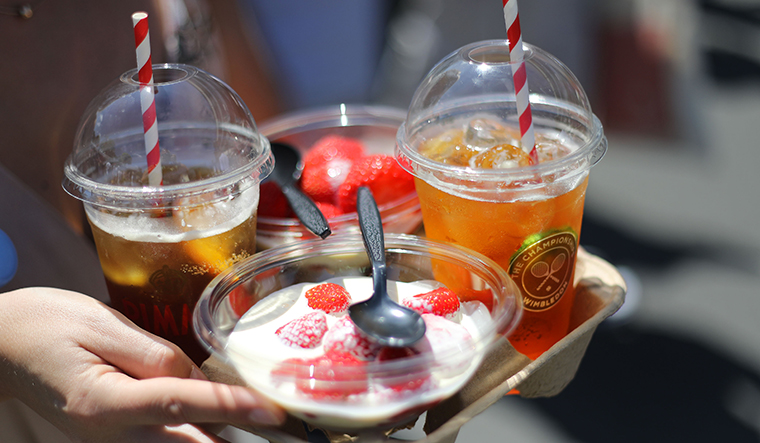 Wimbledon is the quintessentially British experience, if there ever was one. Right from the bag-checking security personnel, to ticketing staff, the ushers court-side, to guards who remind you not to walk about during points..., every person was unfailingly polite, always smiling and well-mannered. On the walk to Centre Court, tidy white stalls with purple lettering sold strawberries and cream, sweets and treats, champagne, pizza and sausages, and exceptionally decorated carts sold Pimm’s, the classic gin-based Wimbledon beverage.

In a darkened corridor under Centre Court, wooden boards lined the walls with the names of all the previous champions: the gentlemen’s and ladies’ singles, doubles, mixed doubles, the boys and girls. Smartly dressed ushers stood at the entrances to various gangways, directing people to their seats. I was directed down a tube-lit gangway with a low roof. I then turned into a small corridor and was suddenly hit by blinding sunlight and a sea of green. My jaw dropped. My seat was bang in centre of the court, right across the umpire and the players’ chairs. It was so close to the grass that I could almost pluck a little and eat it, just like Novak Djokovic did when he won the final. The royal box was to my left; that day it had the Duchess of Cambridge’s brother and sister, James and Pippa Middleton, with iconic editor-in-chief of Vogue magazine, Anna Wintour, in attendance. Centre Court was smaller than I had imagined, far more intimate than it appears on TV.

At the stroke of 1pm, my dream came true. Rafael Nadal stepped onto court with his opponent of the day, Jaoa Sousa, whom he demolished swiftly in straight sets. Next up was Britain’s heart-throb Johanna Konta who, much to the crowd’s delight, beat two-time Grand Slam champion Petra Kvitova in three sets. The third, and last match of the day, featured Roger Federer, who made quick work of Mateo Berrettini in straight sets.

The weather was anything but English; the scorching sun had spectators wear their hats, sunglasses and sunscreen lotion, and many were desperately fanning themselves with tickets, pamphlets or anything they could lay their hands on.

Of course, they also cooled off with Wimbledon staples—strawberries and cream and chilled glasses of Pimms. The first, to be honest, was a disappointment; sour strawberries with flat, unsweetened cream left, well, a sour taste in my mouth. But the second, Pimm’s, was a revelation; fruity, fizzy, and delicious, it was a perfectly heady cocktail to cap off a delirious day.

✦ The only Grand Slam event still played on grass

✦ Players must adhere to a strict all-white dress code

✦ Stalls around the courts sell strawberries and cream, and Pimm’s (a ginbased beverage)

✦ Patronised by the British royal family, who sit in the Royal Box

✦ Unobtrusive advertisement on the premises and in courts

The Royal Box has been used for entertainment of friends and guests of Wimbledon since 1922. It has 74 dark green, padded wicker seats. Invitees include British and overseas royal families, heads of government, tennis stars, sporting heroes, commercial partners, members of the British armed forces, prominent media organisations and supporters of British tennis. Invitations come from the chairman of the All England Club and guests are invited to the Clubhouse for lunch, tea and drinks. The dress code is ‘smart’, and women are asked not to wear hats as they might obstruct the view.

Prajnesh Gunneswaran was India’s only singles entrant in the main draw.

Sagar Kashyap, a former under-18 tennis player from Mysuru, Karnataka, is the youngest Indian to officiate at Wimbledon. He was a line umpire at the Gentlemen’s Singles Final event.

Actor Deepika Padukone and sister Anisha, a professional golfer, were invited to the Royal Box for the Gentlemen’s Singles Final.

HOW TO GET TICKETS

The public ballot for UK applicants

✦ Applications usually open on September 1 and forms are available till December 15.

The public ballot for overseas applicants

✦ The ballot is usually open from December 1 to December 15 every year. Applicants should register with the Wimbledon website to get notifications of the exact dates. Only one application per household is allowed. Successful applicants are notified between January and March the following year.

These tickets are sold on the Wimbledon website. A debenture ticket holder can view matches either on Centre Court or Court No 1 on a particular day and has access to exclusive restaurants and bars on the premises. Prices start at £1,000 at the beginning of the tournament and can go up to £3,500 for the men’s final. These can be bought on the day of the tournament.

Several hundred returned and reserved tickets are sold online, 48 hours before the day of play and each morning for the following day’s play, respectively.

✦ People often camp outside overnight, hoping to get to the front of the queue early in the morning to get tickets for the day’s play.

✦ Ticket prices for those who win the ballots, or secure tickets through Ticketmaster or The Queue range from £33 to £225; prices vary based on the

court, and the day.