World Cup: Lack of depth in India's batting is worrisome

Despite an excellent start at WC, lack of depth in India’s batting order is worrisome 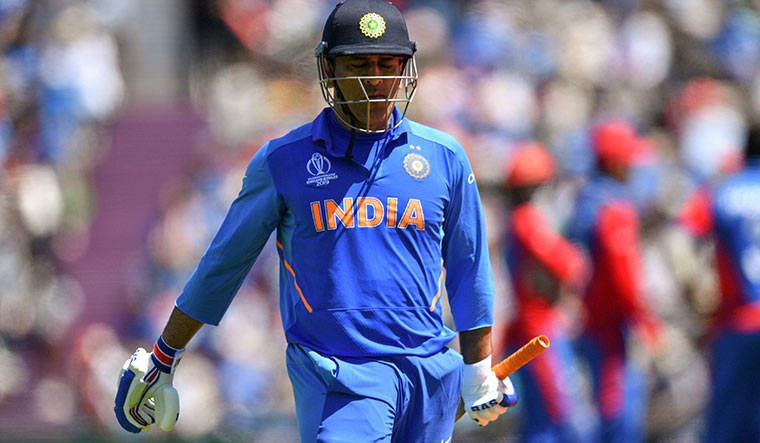 Finishing trouble: M.S. Dhoni walks back to the pavilion after his dismissal against Afghanistan | AFP

The ICC Cricket World Cup 2019 has not gone Mahendra Singh Dhoni’s way. His underwhelming batting performance against Afghanistan on June 22 and the controversy about his wicketkeeping gloves have put the former India captain in the spotlight. In that match at the Hampshire Bowl, Southampton, Dhoni walked in to a round of applause. But the capacity crowd soon went quiet. It watched with growing unease as India’s one-time finisher par excellence struggled at the crease. Seventy five minutes later, he walked back amid boos, with 28 off 52 balls.

Leg spinner Rashid Khan was yet to rediscover his line and length after the drubbing he got in Afghanistan’s match against England. He bowled short to Dhoni, but the latter could only manage some shots straight to the cover fielder. The outcome was 11 dots in 13 deliveries. At the other end, the pressure on his partner Kedar Jadhav kept mounting. Dhoni eventually fell to Khan’s bowling, in a futile bid to up the ante. His dot ball percentage—63 per cent—was very high by ODI standards. Not much materialised after Dhoni’s dismissal and India ended their innings at 224 for 8.

A few hours after the disappointing batting performance, Dhoni was back in his element, advising bowlers and, at one time, setting fields. He even told India captain Virat Kohli where to stand when death bowlers Jasprit Bumrah and Mohammed Shami were working their magic. During training and off the field, Dhoni is still the boss. “Mahi Bhai” commands respect, gives inputs to the junior players, observes and goes about his routine. Though his experience and reading of the game leaves very little space for coaches to guide Dhoni, India bowling coach Bharat Arun said there was a constant dialogue between all batsmen and the coaches.

But, despite India’s impressive run at the World Cup, whispers about the decline in Dhoni’s batting prowess have become louder, as have concerns over the lack of fire power in India’s middle order. The biggest criticism of Dhoni’s Southampton innings came from none other than Sachin Tendulkar. In his post match analysis for a news channel, Tendulkar said that Dhoni, as a senior player, should show more intent. “M.S. Dhoni has the ability to hit, but his strike rotation was not good,” he said. “He faced too many dot balls and this hampered a strong finish for India.”

India may have won the low-scoring match against Afghanistan, but the issues with its middle order were exposed. On a slow, sluggish wicket, the only batsman who looked at ease was Kohli. At the start of the World Cup, Kohli had declared that K.L. Rahul would be India’s No 4. But, opener Shikhar Dhawan’s injury saw Rahul being asked to revert to his original role as opener. All-rounder Vijay Shankar, who came in at No 4 against Afghanistan, got a start but perished after scoring 29 from 41 balls. The explosive Hardik Pandya, who came in at No 7 in the 45th over, was dismissed soon while trying to accelerate the run rate.

Tendulkar flagged these concerns, too: “There were not enough outings for the middle order batsmen till now and that put pressure on them.” Shankar is more of a floater in the India team, and he is well aware of that role. Not an easy task for the all-rounder, with conditions asking questions of batsmen in this World Cup. “I have to be flexible in my role,” said Shankar. “I feel it is very important as a cricketer to be able to adapt quickly.”

Jadhav said he was sent at No 6 to get some more ball time. To his chagrin, he found out that the pitch had already slowed and afforded turn to Afghanistan’s four-pronged spin attack. “I have said in the past that I tried to learn a lot from how Dhoni bats,” Jadhav said after the match. “When I went into bat, I felt like the wicket is not so flat that you can play your shots. The ball was not coming on to the bat that easily. We had to take our time. They had two to three quality spinners, so that does not help when the wicket is slow and you are trying to hit the ball.” Jadhav, who scored a gritty 52 off 68 balls, said they were planning to get around 250 or 260. “I think we can definitely improve, but I don’t see any other team having three to four quality spinners,” he said.

Former India captain Dilip Vengsarkar is currently in Manchester touring with his Dilip Vensarkar Academy team. For him the main issue is not Dhoni, but the vexed No 4 spot. The former chairman of selectors told THE WEEK that “a pure batsman is needed in the position”. Teams like England, Australia and Bangladesh have comparatively better middle orders, courtesy of an assured No 4. England have captain Eoin Morgan (followed by Ben Stokes and Jos Buttler at No 5 and No 6). Australia’s No 4 is Steve Smith, Bangladesh have Mushfiqur Rahim and New Zealand have Ross Taylor.

Former India player Dilip Doshi said that he did not have much confidence in the middle order. “In an ideal team, Dhoni should come at No 6 and Pandya at No 7,” he said. “Someone like Ravindra Jadeja needs to be utilised.” Doshi, too, is not worried about Dhoni’s batting. “He is a superb team player; he would never put self before team,” said Doshi. “I am sure he will produce a winner soon. He is aware that there is no big batsman to follow him. Pandya is still learning.”

With Rahul’s promotion up the order, the India team management will have to consider whether it wants to push Dhoni further up the order. Shankar looks keen to grab every opportunity that comes his way. Though India’s campaign is entering a crucial phase, there is still some time to give the benchwarmers a chance. Three of those sitting out are middle order options: Dinesh Karthik, Jadeja and Rishabh Pant. It will be interesting to see what the management and the captain choose to do.