In his fourth WC, Shakib Al Hasan has taken his all-round game to a whole new level 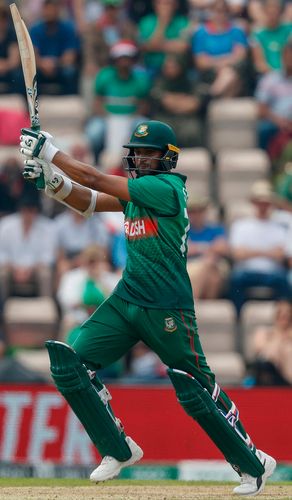 During this year’s Indian Premier League season, Shakib Al Hasan found himself warming the benches more often than not. The all-rounder featured in only three matches for his team, Sunrisers Hyderabad. But he did not sit around moping. The Bangladesh Test and Twenty20 International captain got his mentor Mohammad Salahuddin to come and work with him. The agenda was to work on his all-round skills, ahead of the World Cup.

Two months later, lighter by almost 6kg, Shakib is in the limelight on cricket’s biggest stage. His displays for Bangladesh in England have lit up the World Cup, as he rewrites records. Established top batsmen are all among runs this time, but Shakib, 32, has grabbed eyeballs with his all-round heroics. He has become the first player ever to score 400 runs and take 10 wickets in a single edition of the World Cup. In six games so far, he has scored two centuries (against West Indies and England) and three half centuries (against Afghanistan, New Zealand and South Africa). Wielding his magic with both bat and ball once again against Afghanistan at the Hampshire Bowl in Southampton, he was outstanding—scoring 51 and then ending the Afghan resistance with bowling figures of 29 for 5. He has become the first Bangladesh player to cross 1,000 runs in the World Cup.

Former Bangladesh left arm spinner Abdur Razzak wrote in his ICC column: “He is in very good touch with his bowling, and his batting has been brilliant at this ICC Men’s Cricket World Cup. In fact, I have never seen him play like this—the consistency he is showing is incredible. I have played with him many times over the years, but this is the best form of his career.”

A delighted Sunil Joshi, Bangladesh’s spin bowling coach, calls him a legend. “It is a source of great pride that we have a player like that in the Bangladesh side. He is Mr Consistent for us—be it with the bat, the ball or in the field,” said Joshi. “He has really focused on his fitness. You can see how that has paid off with his running between the wickets, you can see the hunger in his cricket. His presence is really helping us to take our whole game forward.”

Simply put, he is the finest that Bangladesh cricket has produced in its two-decade-old international cricket history. He is the fulcrum around which the Tigers have rallied in their thrilling World Cup campaign so far, and has been a member of the Fab Five of the team along with Tamim Iqbal, Mashrafe Mortaza, Mushfiqur Rahim and Mahmudullah.

Shakib hails from an educated middle-class family from Magura, a district 160km from Dhaka. His father was a bank employee, and mother a homemaker. He was sent to Bangladesh Krira Shikkha Protishtan, a government-run sports institute-cum-boarding school, where his talent was honed and polished. From there on, it was a steady progression to the Bangladesh senior side.

Currently ranked as the world’s best ODI all-rounder, Shakib’s journey with the Tigers started in 2006. He was part of the team that ousted India from the 2007 World Cup in West Indies. He was made the Bangladesh Test and ODI captain at the age of 22. His talent and form remained unaffected. He led Bangladesh to its first overseas Test victory, against West Indies in 2009.

Former India left-arm spinner Dilip Doshi, who is based in England, told THE WEEK that Shakib’s bowling in this tournament is all about utilising his experience. “Whatever I have seen of him in the IPL and in England so far, Shakib is a very accurate bowler who changes his pace very well,” said Doshi. “His main strength is not turning the ball so much. His action does not allow that. But on a spin-friendly attack, he bowls cleverly, using change of pace effectively.”

His successful outings in this World Cup have come at No 3. He had to wait a long time to be able to bat at the spot he wanted, having turned out at No 5 until recently. It was only in November 2017, at the end of previous coach Chandika Hathurusingha’s tenure, that the Bangladesh team management and selectors acceded to his wish. Hathurusingha’s contention reportedly was that he was not batting in that position for his then IPL team Kolkata Knight Riders. In fact, his usual batting position in T20Is has been at No 3 since 2012.

During Hathurusingha’s term, Shakib was plagued by off-field issues. In June 2014, he was fined for making lewd gestures at the camera from the dressing room during an ODI match in Sri Lanka. Then came a six-month suspension by the Bangladesh Cricket Board for misbehaving with Hathurusingha. But these are isolated incidents, and Shakib does not carry a “bad boy” reputation.

This is his fourth World Cup, and one in which he is determined to make his mark. However, he shrugged off his individual performance after the Afghanistan match. “I do not rank my performance at all, but it is very satisfying when I am contributing with both ball and bat, rather than in just one sector,” he said. “It was needed and important from my perspective and the team’s. Luckily, I have been doing this, I am very happy with the way the tournament is going, but there are still two very important matches. India are the top side, [they are] looking at the title. It is not going to be easy, but we will give it our best shot.”