Lord's Cricket Ground and the mystique surrounding it 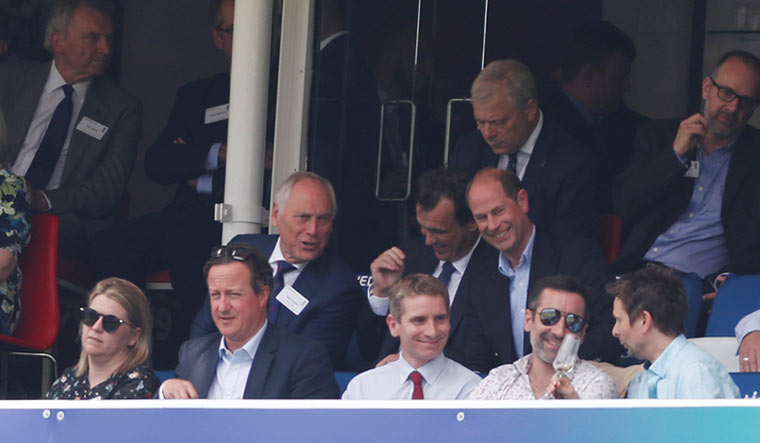 Big shot gallery: Former British prime minister David Cameron (second from left) and other guests in the stands during the England-Australia match | Reuters

You can carry a picnic basket, a bottle of wine, or two cans of beer or two cans of premixed aperitifs. Welcome to Lord’s— the only international cricket ground in the world where spectators can bring their own alcohol. Also, it is the home of cricket. The keeper of rules, laws and the spirit of cricket.

Such is the aura of Lord’s that players—past and present—have failed to remain unaffected by its history and tradition. It is not the wicket or the conditions. It is simply the occasion. You have the Wimbledon, the Royal Ascot, British Open golf and a Lord’s Test match—a must on the social calendar.

The Lord’s Honours Board in the pavilion, which celebrates players who have scored a century there, is where each cricketer wants his or her name to be.

Kumar Sangakarra, former Sri Lanka captain, is president designate of the Marylebone Cricket Club—the owner of Lord’s ground and guardians of the laws and spirit of cricket. On lords.org, Sangakarra explains why Lord’s is so special for every cricketer. “2002 was the year that I made my debut here. I remember being hosted for lunch and just the experience of the place, feeling the sense of history, was unbelievable. I think the importance of getting a hundred at Lord’s increased over time for me. I scored 10 and six not out during my first knocks here. I missed out on getting a hundred and the significance of Lord’s was always in the back of my mind. My last Test here was in 2014, and for me, it was always going to be my final series in England for Sri Lanka…. I remember walking down the stairs in the pavilion, just thinking, ‘Don’t get out first ball’. I was worried about that…. It was a huge sigh of relief when I was able to get my hundred. As soon as I hit the ball, I knew it was going for four. To celebrate that with my friend [Mahela Jayawardene] was special. He knew how much I wanted that century—he had done it twice at Lord’s. I wanted to be a part of it and now my dreams had come true.”

Similar views are echoed by Ali Bacher, another illustrious MCC member. He is 77, but remembers most vividly why Lord’s is special to him. “I toured England in 1965,” he said. “My first Test match was at Lord’s. Normally I had a pretty calm temperament. That day we won the toss and chose to bat first. I was a bundle of nerves when I walked into bat. I batted at number six. I was so nervous I was in a daze. It’s the history, the occasion that can never be forgotten.”

The location of Lord’s Cricket Ground has changed thrice. The first match was on May 31, 1787, when businessman Thomas Lord staged a game between Middlesex and Essex Dorset Fields. Later, Lord’s relocated to North Bank. In 1814, due to a Parliament decree, Lord had to establish a new ground on the Eyre Estate in St Johns Wood. Come July 14, it will host its fifth men’s cricket World Cup final. The previous ones were in 1975, 1979, 1983 and 1999.

Said MCC Chief Executive and Secretary Guy Lavender to THE WEEK, “With 2019 set to be one of the most remarkable years in the history of Lord’s, this summer the ground will become the backdrop for eagerly awaited matches from around the globe. Over 1.5 billion people are expected to tune in to watch the final. This tournament is a major highlight in the cricketing calendar, but there will be plenty more to come at Lord’s. We look forward to welcoming Ireland for a historic Test match at the end of July and, of course, there is the Australia Test match [Ashes series] to look forward to in August.”

St Johns Wood, in itself, has become more than just the location or tube station, courtesy Lord’s. Sachin Tendulkar, a member of the MCC, has a house near Lord’s; former BCCI president, the late Raj Singh Dungarpur, too, had one in the area.

Anil Kumble, former India captain, is also a member of the MCC. “Attention to detail and keeping the tradition alive is what makes Lord’s so special,” Kumble said. “Just walking around the ground and inside the main building, displaying various events, performances and also displaying them in a way that appeals to cricket lovers across the globe.”

Lord’s and MCC have perfected the art of hosting a match. Stewards in green jackets gently guide you to your seats. The picnic basket you carry can be taken to the garden at the back of the Warner Stand—just spread out the sheet and settle down if the sun is out.

Though the home of cricket is often associated with Test Matches, ODIs and county matches, it also hosts a broad selection of other matches every year. The Eton vs Harrow is one of the longest-running sporting fixtures in the world and the oldest continually played match at Lord’s, dating back to 1805. Oxford vs Cambridge was first played at Lord’s in 1827, two years before the first boat race.

Lord’s is also home to the MCC Museum, one of the oldest sporting museums in the world. It has 3,000 pictures, glass and ceramic ware, paintings and portraits recording evolution of cricket from the 18th century.

But, perhaps, Lord’s and MCC’s biggest influence is spread beyond just the ground via The Blue Book or the MCC Laws of Cricket manual. The MCC, as the custodian of the laws that govern the sport, write out and interpret laws which are applicable to everything from a village or club game to international matches. Through its World Cricket Committee, it debates on issues related to the game and sends recommendations from time to time.

Until 1999, no woman other than the Queen was allowed inside the pavilion

Novelist Sir Jeffrey Archer was the first to have his membership suspended for seven years by the MCC, after he was convicted in 2001

The south end of the ground is about 2.5m lower than the north end, and this causes deviation when bowling