Now, Rohit Sharma is being hailed as one of India’s finest ODI batsmen 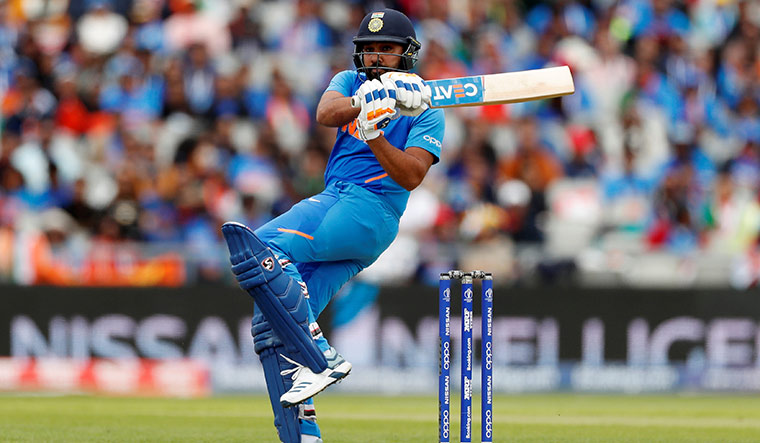 For a tournament where rain has played spoilsport, there were fears of the high-voltage India-Pakistan clash also being washed out. There was no rain on the eve of the game as India came out to practise at Old Trafford, but it was cold and windy. As Rohit Sharma left the net session, he asked for the weather forecast for the match day. When told rain was expected in the afternoon, he quipped, “It better stay away or the fans will burn the stadium down.”

On match day, as the teams came out after the rain interruption in the afternoon, Rohit carried in his pocket a sheet with the Duckworth-Lewis-Stern (DLS) method calculations printed on it. Occasionally, between overs, the India vice-captain would take a peek at it. He is the team’s DLS man most of the time.

He is also India’s run machine in his own right. Rohit’s centuries against South Africa and Pakistan were different as day and night. His 122 (not out) in India’s opening game was a patiently crafted innings. And, his 140 against Pakistan was his third fastest ton (85 balls)—a fluent, dominant innings, laced with his trademark pulls and cuts.

His high scores are not the result of just bludgeoning the ball but mesmerising strokes that are superbly timed or even innovative. His six over point off Hassan Ali was reminiscent of Sachin Tendulkar’s six off Shoaib Akhtar during the India-Pakistan encounter in 2003 in Centurion, South Africa. The hundred against Pakistan was his 16th in the last three years. Such has been his form.

This is only his second World Cup, but he is, after M.S. Dhoni, the most experienced player in the team, having made his ODI debut in 2007. The years 2017 and 2018 saw him scoring more than 1,000 ODI runs each. He is on a roll, considering the first seven years of his ODI career had only eight centuries and were frustratingly erratic. His talent was always on display, but he lacked consistency. That has changed over the last few years, as his big knocks have eased the pressure on those like Virat Kohli.

“Out of the world” is how former India captain and chairman of selectors Dilip Vengsarkar describes Rohit’s batting. “He has matured. He has been playing for years now and is an experienced player. And, I think [he is] one of the best in the world,” said Vengsarkar. “The innings he played [against Pakistan] was outstanding. His [regular] opening partner [Shikhar Dhawan] was injured. The way he played showed a lot of responsibility. He played his shots and improvised later on.”

Former India player Sanjay Manjrekar said, “The Rohit Sharma that used to play a wild shot and get out after a promising start, leaving us tearing our hair out, is long gone. He is currently in a great mind space. It shows also in his leadership of Mumbai Indians.”

Former all-rounder Abhishek Nayar, who is a coach and mentor of Kolkata Knight Riders, is one of Rohit’s closest friends. Holidaying with his wife in London, Nayar told THE WEEK that he has seen Rohit’s cricket journey from close quarters. “The last couple of years, captaining Mumbai Indians and being in a leadership role, has helped Rohit a lot,” said Nayar. “There is a sense of calmness in him now. Having won four IPLs, there is a sense of self-belief as to what it takes.... He is in a zone where he is very happy, both as a cricketer and an individual, and the credit for that goes to his wife Ritika [Sajdeh]. I guess every player has a time and this is Rohit’s time.”

Rohit responded to the high praise, ahead of the match against Australia. “I think I have played more than 200 ODIs now,” he said. “If I do not do it now, then when? So, experience teaches you a lot of things, and that is something that has come into my game, of late. You start the innings for your team, and you want to make sure that you you finish off the innings as well. That gives you immense pleasure.”

A lot of his success has to do with the stability in his personal and professional lives. He married Ritika, his long-time manager and girlfriend, in 2015, and recently became a proud father to Samaira. They are also in England during the World Cup. Nayar, who spent time with Rohit and his family when the team was in London, says Ritika has brought immense stability to Rohit’s life and a “lot of sanity”. “I think it is just the space I am in right now,” said Rohit. “It is a very good phase in my life. Having a a newly born daughter in my life actually has put me in a good space.... The focus was always to start well and then see where the team is heading and then the individual.”

He is a caring teammate, not just because he is the deputy team leader. It showed when he let his new opening partner K.L. Rahul take first strike against Pakistan—something he would like to do himself. “For me it was important to give him that because he likes to take the first ball,” said Rohit. “He is playing his first game as an opener here, so I wanted to make sure that he was comfortable.” He exudes a laid-back comfort and confidence sans the edginess, which makes the younger team members look up to him for support and advice.

Rohit’s motto is team above self. “I do not look into going past someone or getting close to someone,” he said. “As long as I am playing, I want to make sure that I do the job for the team. Whatever happens along the way will keep happening. That is an external reward for it.”

Possessing a wry sense of humour, he kept a straight face when a Pakistan journalist asked him to suggest how Pakistan batsmen could improve. Like he does with bowlers, he spotted early where the question was headed and said, “I can only tell this if I become the Pakistan coach.” Once again, he had left the room in splits.