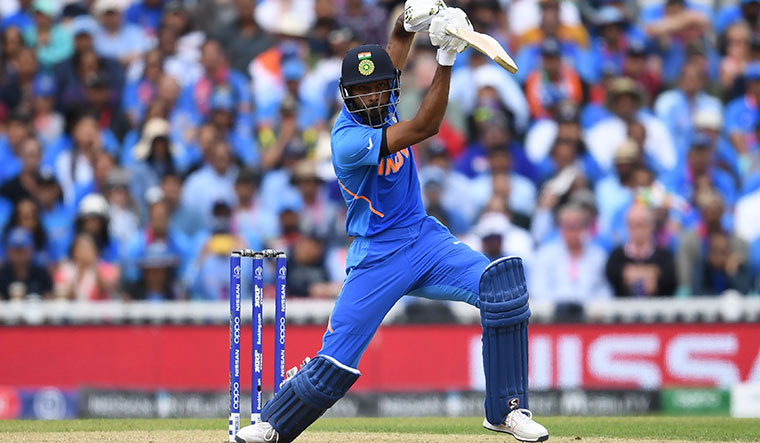 The party boy has left the building. Hardik Pandya is now a man on a mission. Not that he has lost his zing, just that his game shines more than his gold chains now. On the morning of India’s clash against Australia at the Oval, on June 9, Pandya joined opener Shikhar Dhawan in a batting drill. When the latter was bombarded with selfie requests, he pointed to Pandya and teasingly said, “Take with him, he is a big man.” But Pandya was in the zone, and seemed oblivious to the fans shouting his name.

A few hours later, Pandya walked in to bat, promoted to number four, after India had reached 220 for 2 in 37 overs. It was the ideal stage for him. And, he unleashed hell. In 41 minutes, he got 48 runs from 27 balls, and made a statement to the world. His innings had brutality and beauty in equal parts. After the match, captain Virat Kohli said Pandya had given the team 30 extra runs. India had won by 36 runs.

For those who know him and have worked with him, this innings was no surprise. “People may think he is a showman, but Hardik is very serious about his game and is always looking to get better,” John Wright, former coach of India and Mumbai Indians, told THE WEEK.

Krishnamachari Srikkanth, former India captain and a good shotmaker himself, called Pandya’s innings game-changing, adding that the promotion up the order, ahead of M.S. Dhoni, did the trick for India. “His knock made all the difference because it ensured India set [a target of] 352 instead of 312,” he said. “Australia lost control when he was in the middle. Pandya is also a weapon Australia do not have—an all-rounder of the highest quality. England have a box of them, while we have Pandya in what is probably the most important position in the team.”

Speaking to the International Cricket Council, former Australia captain Steve Waugh said, “It is the innings of Hardik Pandya that will send shivers down opposition spines. This guy might just be the equivalent of Lance Klusener in the 1999 World Cup. He has the ability to finish with clean hitting, which no captain can protect [against].”

Wright, however, shunned the comparison. “I am not into comparisons, but what stands out for me is that he works hard on his game,” he said. “I think both [coach] Ravi [Shastri] and Kohli like that he relishes competing, loves a fight and that is why he is doing so well for India.”

What Pandya has displayed—be it in international cricket or in the Indian Premier League—is that he can play an innings where the ball goes past the boundary rope, regardless of what the bowler does. Power aside, it is Pandya’s hand-eye coordination and his ability to get into position quickly that have made him such a dangerous player. Though he had shown this ability for the past three years, it became more consistent during this year’s IPL.

Former India wicketkeeper Kiran More, who has been Pandya’s personal coach since his childhood, said the Baroda boy would be crucial to the team. “He will bail out the team when it needs to be,” he told THE WEEK. “He will come in at any situation and hit a quick 50, 75 or 100. In the match against Australia, the runs he scored proved to be so crucial. He will finish off the game for India.”

According to Kohli, who was egging on Pandya from the the other end during the Australia match, it has to do with the mind. “He knows he is batting really well. In the past, he tried too hard sometimes, but I think [because of the] IPL, he believes he can clear the boundary whenever he wants. So, he is not trying to overhit the ball and is just timing it well.”

Pandya had gone into the IPL a few months after his controversial comments on a talk show, alongside teammate K.L. Rahul, had kicked up a storm. Both were asked to return from the tour of Australia and were suspended. The outrage was enormous. Pandya lost a few endorsement deals, too. Reportedly, both of them got an earful from Kohli in the team dressing room before they returned to India.

Pandya later apologised, saying he got carried away on the show. He returned to the team during the series against New Zealand, but kept a low profile, at least regarding his off-field activities. His family and friends rallied around him, and Kiran More had a chat with him. “He never compromised on his training, even when he was in the thick of the controversy,” said More. “He loves his cricket, it is his life. He was always a complete player with great timing. The way the ball would come off his bat was special, like it does for batsmen like Virat Kohli and Rohit Sharma. He has come out stronger from this controversy and is on a different level now. He has improved tremendously in all areas.”

When Pandya started the IPL season, he was keen to keep the focus on his game. And so he did. In 15 innings, he scored 402 runs at a strike rate of 191.42, helping his team win its fourth title. And it was with this confidence that he entered the World Cup. Interestingly, throughout the IPL and so far in the World Cup, Pandya has been kept away from the media. He spends his off time with teammates such as M.S. Dhoni and Rohit Sharma, and has successfully put all the controversy behind him.

“Honestly, he does not really care what tournament he is playing,” said Kohli. “He just wants to go out there and express himself. That is his strength, and he should stick to it. That is why we back him so much, because he has game-changing ability and he believes in himself a lot. He is in a good space right now. It is important to stay in that space. He is really having fun and I am delighted to see him come back so strongly, enjoying himself on the field. He is not [being] harsh on himself. He is respecting the sport and just playing it for the love of it, which is really good to see.”